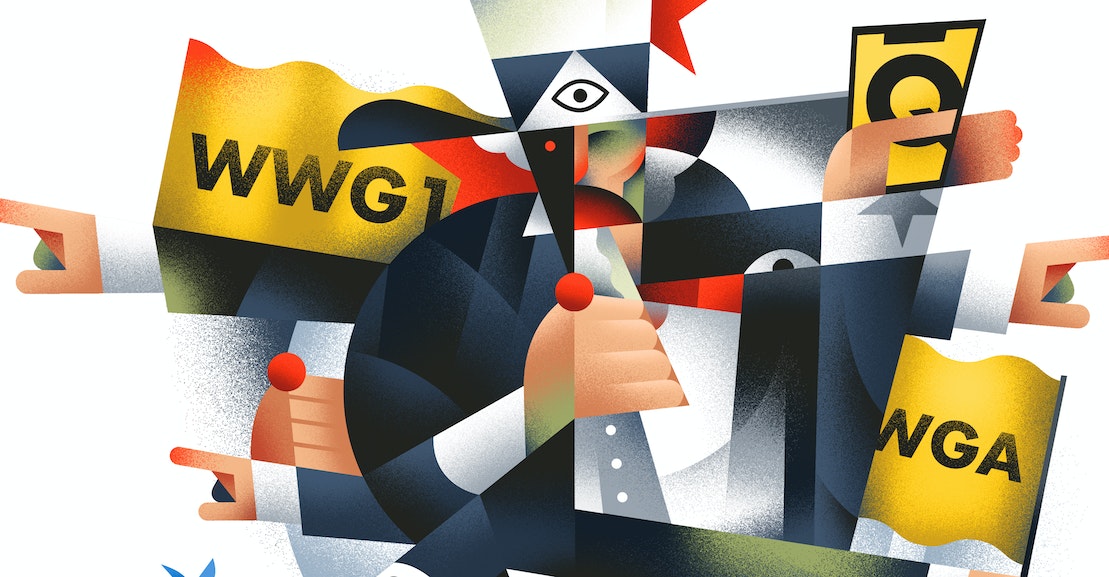 Journalist Jeff Sharlet has likened the beliefs of the QAnon faithful to gnosticism: Followers believe that through Q they can divine the secret patterns behind all things. For years now, some of its most active participants online have been spreading the word with zeal and, on a few occasions in the off-line world, with violence, gaining the notice of the FBI. They have been promised a war. They tell themselves the president is on their side.

This July, on one scorching day better spent indoors, just over 1,000 people were tuned in to a QAnon livestream as two women read Q’s intel “drops,” alternately weighing in on their relevance. It’s part of a 24/7 YouTube channel on which a Trump campaign communications staffer appeared last October, making an appeal to the channel’s more than 79,000 subscribers, or, as the host called them, “soldiers on the ground.” As I watched, while a chat box scrolled endlessly and a DIY news chyron announced, “DONALD TRUMP VOWS DEPLOYMENT OF MORE FEDERAL FORCES IN MAJOR CITIES,” the hosts sifted through the messages behind Q’s messages. “These next two weeks coming, they’re going to be like two weeks you’ve never seen,” one said. It took Trump only two days to announce Operation Legend, his “surge” of federal law enforcement officers into American cities.

Oregon, where it all exploded, is perhaps the clearest window we have into the occult, terrorizing politics unleashed by QAnon: There, Republican Jo Rae Perkins is challenging Jeff Merkley on November’s ballot. In January, she announced her Senate bid in a tweet adorned with QAnon hashtags. As Willamette Week noted, “The strong implication was that Perkins believed her candidacy was part of a greater, secret struggle.” The hot, weird summer of 2020 has handed her one.

Perkins was nominated in May, with 49 percent of the Republican vote. That night, her campaign posted a video of her saying she stood with Q and the president, along with the “anons” and “patriots.” “Together,” Perkins said, “we can save our republic.”

Still, the Oregon state Republican Party stood by her: It has so far made no official comment on Perkins’s candidacy, but the party’s vice chairwoman told The New York Times that Perkins had her support. Some other Republican candidates, along with Oregon Right to Life, have endorsed her.

They may have seen not liability but opportunity in her ties to QAnon. While Merkley was on national TV in July decrying the federal officers loading protesters into unmarked vans, Perkins was, as her Q comrades were, livestreaming her commentary on the Portland protests on social media, praising law enforcement and calling the senator a “traitor” and “sellout.” Trump has made Portland a stage, and Perkins is one of the few candidates who can attach herself to his show and gain votes in exchange.

In its present form, Q has enveloped parts of the Republican Party—the Perkins campaign had the support of a political consulting firm started by Ted Cruz’s former presidential campaign manager, according to Federal Election Commission filings. But the Q true believers have also captured the whole national vibe. Around a campfire on the Fourth of July, former U.S. national security adviser Michael Flynn pledged an oath to Q—“Where we go one, we go all”—and tweeted the video. When QAnon followers promoted a baseless child sex trafficking conspiracy theory involving the online furniture retailer Wayfair, former adult entertainer Jenna Jameson amplified it on Twitter, commenting, “There are no coincidences.”

Any sign QAnon can see can be bent to the movement’s core belief system: the federal agents snatching people from the streets, uprisings and riots, censorship from tech companies wielding unfettered power, a flood of indictments, notorious sex trafficking trials, suspicious deaths. Stolen elections. Crooks operating at the highest levels of government with apparent impunity. A police state. Fascism. QAnon’s paranoid fantasies align with the general and uncomfortable sense that there is no one in charge, just ossified power structures holding up retrograde leaders, with everyone else abandoned by systems of care that have been deliberately hollowed out.