Jamie Oliver appears on the Skype screen looking a bit harassed. He’s at Jamie Oliver HQ and his backdrop is a photographic mural of a giant waitress handing a menu to someone who, I finally figure out when he moves his head, is a young, carefree Jamie Oliver. The contrast between these two faces of the same man – I’m talking about mood, rather than the cruel weathering of time – is striking. He started out as the living embodiment of the carefree lad about town, and now has the frazzled look of a man who is being badgered by seven people at once.

It’s partly my fault. In many ways, I am here to harass him. Oliver’s absolute passion, besides food itself, is fighting childhood obesity, an issue that has just landed at the top of the news agenda thanks to the government’s new obesity strategy, which will include banning junk food advertising and putting calorie counts on restaurant menus.

Oliver is delighted by the announcement, as he was by the former prime minister David Cameron’s work on the issue, and says it was only derailed by Brexit. But his thinking, to my mind, doesn’t make sense – he is clear about the fact that the root cause of obesity is poverty: indeed, he shows me a graph he has had embossed in gold, and put in a gold frame, which shows that children from poor families are twice as likely to end up obese, that they – in his words – “live on the planet less time than their affluent friends”. So I find it absurd for him to laud two prime ministers who have done so much to cause poverty in families, from benefit cuts to sanctions, from abandoning child-poverty targets to gleefully overseeing the introduction of a food-bank culture in this country, and congratulate them for taking obesity in childhood seriously. 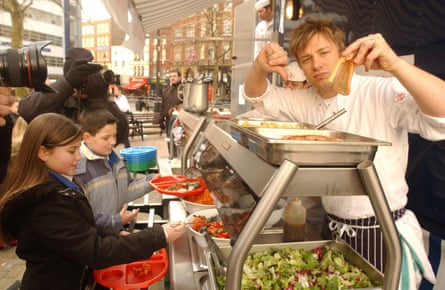 Serving up culinary opposition … Oliver gives the thumbs down to chips and fatty food as he serves up a healthy lunch at Ealdham primary school in London in 2005. Photograph: Andy Butterton/PA

When I put this to him, his answer infuriates me even more: “Some of the most nutritious food in the world is cheap,” he says. “Please don’t worry. But it doesn’t mean anything without education and access. Of course there’s cost, but if you have the knowledge, you’ll know how to beat the cost. Mate, I’ve spent 25 years travelling the world, and the poorest communities always have the best food. I’ll take you to Costa Rica, I’ll take you to Italy, I’ll take you to the council estates of Sardinia and Greece, and the food will blow your mind.”

My criticism is unjust, I realise, as our conversation unfolds. Oliver may not openly attack the government, but he is, in some ways, quite trenchantly anticapitalist. In 2019, he set about turning his remaining restaurant business into a B Corporation, a certification for businesses that, according to its website, “meet the highest standards of verified social and environmental performance, public transparency, and legal accountability to balance profit and purpose.” It’s a wildly exacting process, or as he puts it: “It’s fucking hard. It makes the Inland Revenue look like pussycats. They are properly in your laundry drawer, getting into your pants, having a good look.” 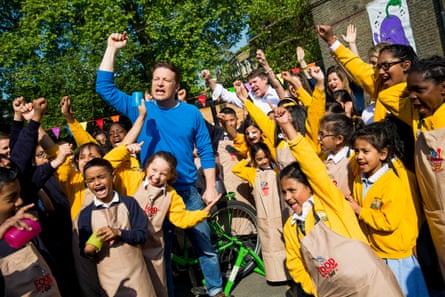 Oliver has been preoccupied with certain social justice issues for many years – the nutrition in school meals, but also the realities of work, career progression and opportunity. Or, as he puts it, “how we train our staff, how we had pot washers becoming head chefs”. But he has a new articulation of what “good” looks like to him.

He believes in the arduous process of things such as becoming a B Corp, he believes in experts, bureaucracies, rules: “We cannot and we should not trust one person assuring you jack shit,” he says. “If you look at rhetoric around business and trade, it’s a lot of what seem like perfectly decent people saying the right things, disarming you, assuring you, and what’s really going on, the public doesn’t notice. It’s like a snail, you think he’s not doing anything, but put him on a time-lapse and you’ll see him doing all sorts … eating, foraging, shagging, all sorts.”

It’s pretty indirect, as any statement would be that arrived via a densely complicated snail analogy, but it does sound a bit like a plea for better, more mature business and politics.

Simultaneously, he is attacked by the right, for his nannying ways, getting in our Turkey Twizzlers, telling us what to do. There’s not a lot he can say without the tabloids going after him – a fact he references frequently – and this has been true ever since he launched his school-dinners campaign in 2005.

I did the opposite of taking meat products away. I guaranteed a minimum of 65% meat!

“That was my training ground for taking a lot of shit even when they [the newspapers] were talking crap. To this day I get a lot of shit for taking away Turkey Twizzlers. What we did was create the minimum standards for meat products in school, which didn’t exist before. Even though I knew I was smugly righteous, I felt very passionate.

“When Mrs Thatcher took away the state providing the food and put it out to competitive tendering in the 80s, cost became the only measure. If you wanted to sell dog food in this country, there were robust standards which if you breached you’d go to court. There was none of that with what we fed our children. And I changed that. If you look at it like I was a drug dealer, what I did was clean up the product, stop cutting it and gave them better gear. I did the opposite of taking meat products away. I guaranteed a minimum of 65% meat!”

I think most of his opponents know this, but his card has been marked, now, as one of those pesky celebrities who care about the world and refuse just to disappear into their own wealth (see also, Gary Lineker – and I don’t doubt they’ll be coming for Marcus Rashford one day soon). 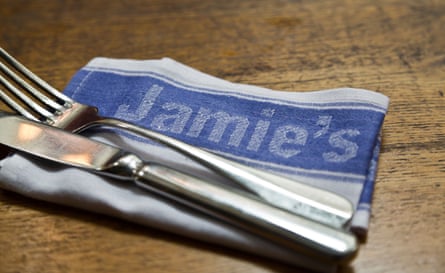 Tableware in a branch of Jamie’s Italian … losing the chain last year was a blow. Photograph: Alamy

The result is a kind of glee when things go badly for him, as they recently have. His restaurant chain Jamie’s Italian went under last year, taking with it all but three of his 25 UK restaurants and 1,000 jobs. It was a blow: “I had my arse kicked for the past three years trying to save Italian and I pride myself on having done the best version of bad.”

As much as he weathered the failure (he still has a number of franchises outside the UK), he warns that it told a bigger story. “I always said what’s happening to me is like a weather vane of what’s going to happen to everyone else. Can you bring values into the mainstream? Can you bring values into the high street? It can mean working with small farmers, buying higher welfare meats, actually cooking on site, which means actually employing more people, which means actually training people. But honestly, mate, we nearly got there.”

In a rare display of pessimism, he is worried for the British restaurant industry, and not just because of Covid-19. Indeed, the virus doesn’t come into it.

“If you look at everyone doing well at the moment, they are basically prepping and shifting fairly low-quality food. So the thing I’m most worried about at the moment is the actual business of cooking and service is hugely under threat. Because it doesn’t pay the bills to care.”

I’m not saying don’t have a KitKat, because if you want one, God knows you should have one

Even though his restaurant chain going under was a bruising experience, it hasn’t dented his readiness for a scrap. Today, he launches into an unexpected broadside against vending machines. “Does anyone give a shit about vending? Of course not. But it’s huge. Often in workplaces that don’t supply lunch or dinner, [employees] have no other source of nutrition. I’m not saying don’t have a KitKat, because if you want one, God knows you should have one. I’m saying if you’ve got 5,000 people taking 999 calls, with three shifts a day and no food on offer for two [shifts], it would be morally right to have choice. If there’s only crap [food available], that’s not democracy.”

Again, I find it a little bit frustrating that this has to be about food: because really it’s about conditions at work, the responsibilities of the employer, and the real answer is not to have cucumber batons in the vending machine, it’s to join a union. But I feel bad, because he knows in advance what the response will be (he’s trying to take away our KitKats!), and he wades in anyway. “I actually don’t like fighting. I’m actually quite shy. I don’t like getting into rucks,” he says ruefully. 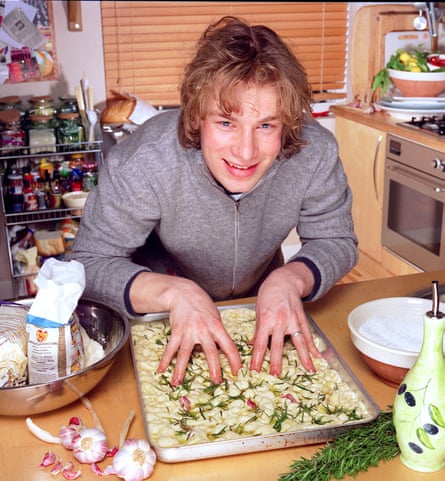 I know that to be true, because I remember how he was in the beginning. It would be a reach to say I did the first interview with Oliver, but it was early days, maybe 1999, when he was already the Naked Chef, but un-famous enough that he needed a gimmick, so he came to my flat on his scooter to cook dinner. My sister was there and resolutely refused to leave, so he had to take all this really carefully considered food – including individual chocolate fondants – and divide it into three. His whole shtick was that he was truly impossible to dislike. He’d feed you food you weren’t expecting – pasta with candied fruit, we were definitely not expecting that at the end of the last century – and you’d have to like it, because you liked him.

There was no front to him, no armour. He asked us where our fellas were, and my sister said scornfully (she’s got something against Waiting for Godot, don’t know what), “they’re at the Barbican, seeing some Beckett,” and he said, “what’s a beckett?”

He didn’t start out a firebrand. If anything, he was a pleaser. And he describes, 12 years into his career, a gear change: “I think it was looking in the mirror in disbelief, going: ‘Bloody hell, this kid that grew up special needs.’ And there I was, I had a house, I’d sold 20m books.

“That’s not showing off, that’s saying I have a longitudinal relationship with the public. That’s a vote.” And there is something in the way he tackles injustice, that he sees people as constituents as much as compatriots.

Later this month, he’s bringing out a book called 7 Ways. It’s a neat idea, he’s crunched the data on the ingredients people buy in supermarkets every week (we all constantly buy the same things, it may not surprise you to learn) and come up with new things to do with them. So I asked him about it, not even to be polite, but out of genuine interest. And he groaned. “Please don’t do this. Please don’t make me sound like that kind of arsehole. Don’t make it sound like I say all this stuff, but all I’m trying to do is sell more books.”

It was a bit chastening, actually. I disagree with some of the politics, but I would never query whether or not this was a person trying to do good in the world. It’s not the rucks that have tired him out, it’s the world of cynics, waiting for the gotcha moment. So anyway, I probably will buy his book, but let the records show that was never the point of all this.