John Hume, who has died aged 83, did more than any other person to shepherd Northern Ireland to peace and reconciliation, a feat that earned him global acclaim, including a Nobel prize.

As leader of the Social Democratic and Labour party (SDLP) he conceived and crafted a solution to the Troubles that won support in London and Dublin, Washington and Brussels, and eventually in Northern Ireland itself in the overwhelming vote for the 1998 Good Friday agreement.

Peacemaking was an often lonely, perilous path but Hume emerged vindicated and triumphant, a revered statesman. Tributes flowed minutes after the announcement of his death.

Ireland’s taoiseach, Micheál Martin, called Hume a hero and peacemaker. “Throughout his long life he exhibited not just courage, but also fortitude, creativity and an utter conviction that democracy and human rights must define any modern society.”

After Hume’s political success came a cruel reversal of fortune: a slow-motion, double unravelling. One private, one public.

Over the past two decades Hume’s mind, a brilliant political instrument that won over the IRA and loyalist paramilitaries as well as prime ministers and presidents, succumbed to dementia, the disease shrouding his intellect and memory, even his command of language, in a merciless fog. 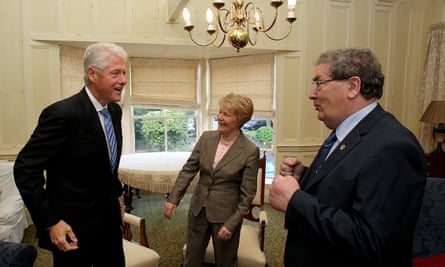 In tandem with mental deterioration, which played out largely behind closed doors at Hume’s home in Derry and a nearby nursing home, his political legacy decayed.

The Good Friday agreement, once considered a beacon of conflict resolution, has endured but frayed. Northern Ireland has yet to have a truth and reconciliation process to heal wounds and agree a shared narrative of the Troubles. Unresolved murders and other “legacy” issues still poison politics.

Earlier this year Sinn Féin and the Democratic Unionist party restored power-sharing at Stormont, along with other parties, after a three-year breakdown, but polarisation endures, a sentiment compounded by Brexit, which has reopened constitutional arguments, leaving Northern Ireland’s future uncertain.

“He steered the community from grievance to governance,” said Mark Durkan, Hume’s long-serving deputy in the SDLP. “He’d be at a complete loss over Brexit because he saw the European Union as a model for Northern Ireland.”

The rapture of 1998 feels a long time ago. Three decades of seemingly intractable conflict that cost more than 3,500 lives ended in an accord that underpinned three strands of relationships: within Northern Ireland, between Northern Ireland and the Republic of Ireland, and between Britain and Ireland. 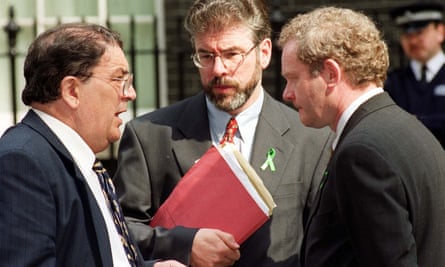 Hume, a Catholic and former schoolteacher and civil rights leader, glimpsed the solution early in the Troubles and as leader of the SDLP, a moderate nationalist party, lobbied other party leaders in Belfast and successive governments in London and Dublin, plus Senator Ted Kennedy and the then US president, Bill Clinton, in Washington.

IRA and loyalist atrocities punctuated the process, opening Hume, a peripatetic, workaholic MP and MEP with secret negotiating backchannels, to accusations of being a fool or a knave or worse, but he persisted.

“The favourite word he liked about himself was ‘stickability’,” said Durkan. “He knew this was what was needed to get to an agreement that would create institutions and arrangements. He was always looking for a solution, not a stance.”

Hume’s role in driving the peace process, forever shuttling, listening, reassuring, explaining, persuading, was still not fully appreciated, said Durkan. “He had to be the constant gardener, to keep going back and back.”

Hume envisaged self-determination for Northern Ireland – it can join the Republic only if a majority vote for it – and recognition of British and Irish identities.

John Major and Tony Blair, and their Irish counterparts, Albert Reynolds and Bertie Ahern, came onboard, leading to paramilitary ceasefires and the Good Friday agreement, thumpingly endorsed by voters in Northern Ireland and the Republic.

Dementia began to affect him in about 1999. Little things at first – struggling to complete crosswords, forgetting dates. It worsened and audiences began to notice. He stepped down from the SDLP leadership in 2001 and retired from public life in 2004.

Cared for by his wife, Pat, he made few public appearances in later years as the disease progressed. Towards the end of his life he could barely see or walk and struggled to understand the meaning of words – a bitter irony for a man who invented “Humespeak”, the peace process vocabulary that others adopted.

He was voted Ireland’s greatest person in a 2010 RTÉ poll. Bono paid tribute to him at a U2 concert in Belfast in October 2018: “Blessed are the peacemakers. I remember John Hume and his vision. Let’s sing for him tonight.”

Ricky O’Rawe, a former IRA member, said Hume knew the future lay in uniting people, not bits of territory. “He sacrificed the domination of his party to save lives, to end the war, to give the Provos [Provisional Irish Republican Army] a way out. John Hume to me is a colossus.”

Trina Vargo, an adviser to Kennedy during the peace talks, said no one did more than Hume to end the Troubles. “His vision was decades ahead of everyone else. His commitment never wavered, he just had to wait for everyone else to catch up with him.”