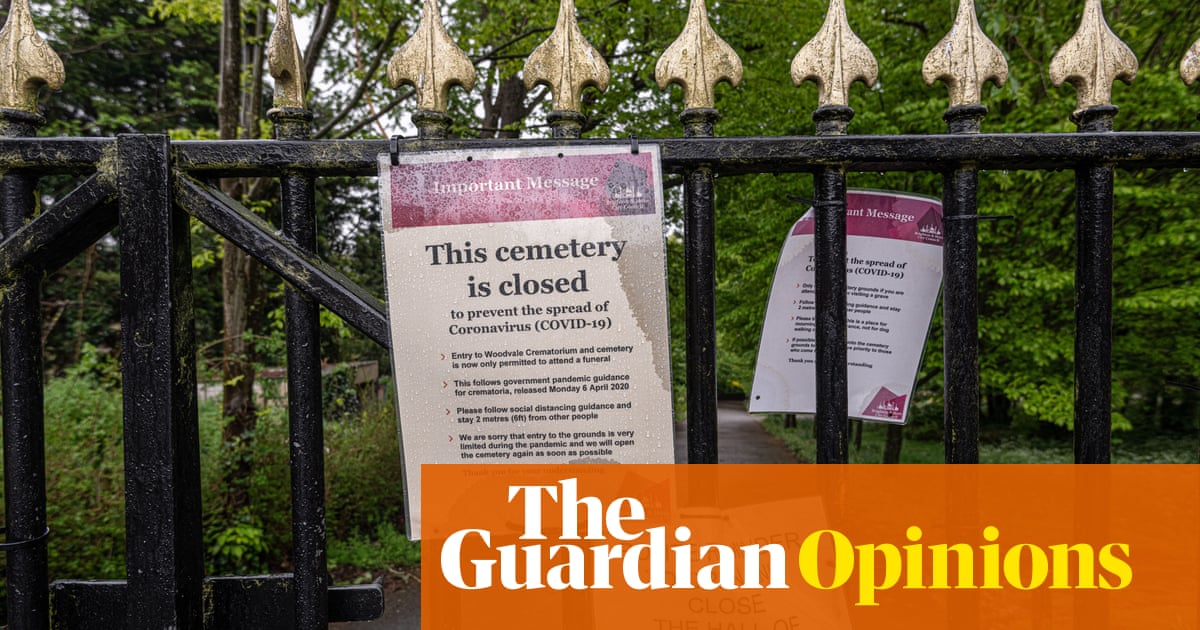 In the early days of the pandemic, when the virus was just beginning to claim lives, the members of grieving families I spoke to all mentioned the unspeakable pain of one thing – not being able to mourn together. Restrictions meant that burials were rushed, sparsely attended affairs – where those few family members who did attend could not hug each other or congregate afterwards.

The most basic of comforts in grief, such as sitting in the same room as others and chronicling the lives of those who had been lost, honouring them with memories, were denied. The trauma of mourning suspended fell hardest on the parents of the dead.

I am haunted in particular by the account of the mother of a doctor who died in March. Bewildered at the sudden loss of her previously healthy son and unable to process his death, she sought out her youngest child – who had self-isolated himself from her in their own home. She would come to his room to chat, to offer food, to ask for help around the house, only to be rebuffed by a young man who now had fear for his mother’s life added to the pain of his brother’s loss. He yelled at her in agonised frustration to stay away every time she came to his locked door. But she continued to return nonetheless, in a recurring loop of unchannelled grief.

The necessary cruelty of funeral restrictions has been compounded by the refusal of the government to acknowledge the scale of the calamity. What should be a nation in mourning for tens of thousands of lives is instead a nation being subjected to a callous triumphalism. On the same day that the latest ONS data showed that the UK has the highest rate of excess deaths in Europe, almost 58,000, Boris Johnson hailed the government’s response to the pandemic as a “massive success”. A week earlier, he had said that the supposed containment of the pandemic had demonstrated the “sheer might” of the UK union. The deaths have been relegated to a footnote, a regrettable but unavoidable loss.

But the loss was avoidable, which is precisely why we are not allowed to mourn publicly and together as a nation. Repeatedly, we have been told the pandemic is a war, the fallen its casualties of battle. But we honour our war dead, we eulogise their bravery, their sacrifices; we put faces to their stories, we award them posthumously, we erect memorials, we pay homage to their lives.

Coronavirus victims receive none of this. Not even the respect of a flag flown at half mast, or a public pastoral address every time the country hits another grim milestone. The only public gesture, a minute’s silence honouring the key workers who had died, was one the government had to be shamed into after Unison, the Royal College of Nursing and the Royal College of Midwives launched a campaign in April.

This kind of action became the only way to nudge the government into performing its duties. Even the financial and legal concessions to those in the NHS fighting and dying to help others had to be prised from the mean fist of government. This absence of largesse and empathy, both to those who have perished and those they have left behind, is cynical. If we do not acknowledge the pain the country is going through we can avoid the truth buried under the propaganda – that many of the excess deaths are the result of political incompetence. So the lies and fake positivity must continue.

The UK’s failure to respond adequately to the pandemic is now well documented. Every month of the past five brought its own theme – the travesty of the delayed lockdown in March, the inability to provide PPE in April, falling short of testing targets in May. With every one of these fiascos, as lives were lost, the government ramped up the victory rhetoric. As the death rate peaked we were told we were “moving in the right direction”; the shambolic test and trace programme would be “world beating”. As levels of trust plummeted after the Dominic Cummings saga, Johnson said he was “very proud” of the government’s response.

The bluster was laced with the implication that criticism was unpatriotic. The hectic VE day celebrations were pressed into the service of the government’s account of a nation under lockdown re-enacting the bravery of previous generations. “We’ll meet again”, sung into the deserted streets of England, and mixed with the government’s synthetic cheerfulness to create the soundtrack of the past few months – enforced upbeatness, suffocated grief. The jolly music blares over the empty fairground of our country.

Not content with withholding the gestures of respect to pandemic victims, the government goes one step further and transfers the blame for their deaths on to various convenient targets. Last week Britain’s black and ethnic minority communities were accused of “not taking the pandemic seriously” by a Tory MP. Johnson, himself the epitome of irresponsibility when he boasted about shaking hands with coronavirus patients, refused to condemn the comments. In the same breath with which it sows such discord, the government appeals for a national unity that it claims can only be achieved through pressing on, through going back to the pub on “super Saturday”, through eating out to help out.

But what unites us all is loss, and the inability to seek comfort in each other. Maybe one day, when the pandemic is past us, and this government safely socially distanced from power, other leaders will recognise the extent of Britain’s bereavement and honour it. In the meantime the British public will once again, unsupported and unacknowledged by its government, have to find a way to salve its wounds.

• Nesrine Malik is a Guardian columnist