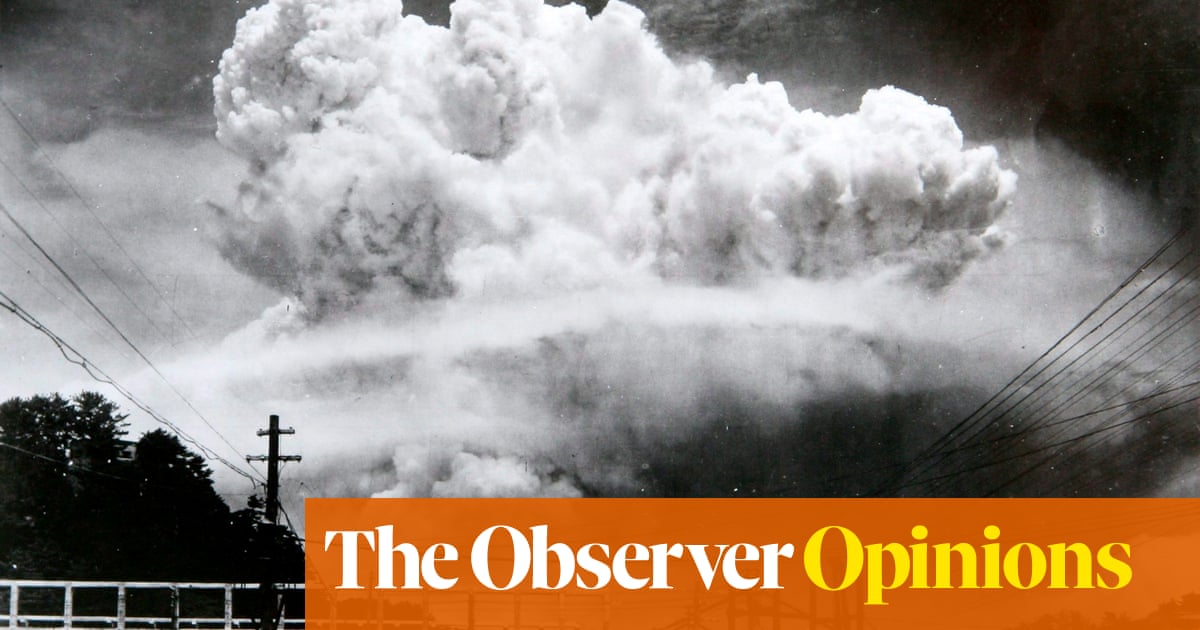 Russia’s apparent test-firing of an anti-satellite weapon in outer space on 15 July, as alleged by the US and Britain, could be dismissed as another of Vladimir Putin’s annoying provocations. That would be a mistake. The alleged new space weapon should be seen in the broader context of a rapidly evolving, hi-tech, high-risk international arms race involving all the major nuclear powers that, largely undiscussed, is spinning out of control.

This week sees the 75th anniversary of the atomic bomb attacks on Hiroshima and Nagasaki that killed over 200,000 people, but the absence of public debate or a sense of alarm about the grim advent of sophisticated new nuclear, hypersonic, cyber and space weapons is striking. In the decades after Hiroshima, noisy anti-nuclear “ban the bomb” protests by CND and others spanned the globe. Today, by comparison, an eerie silence reigns.

The battle for outer space is only getting going – yet deserves immediate attention. Russia’s alleged development of anti-satellite weapons is almost certainly matched by the US and China, and undermines past undertakings about the peaceful use of space. Christopher Ford, US assistant secretary of state for international security and non-proliferation, warned last week that Russia and China had already turned space into a “war-fighting domain”.

“What [the Russians] are doing is signalling to the world that they’re able to destroy satellites in orbit with other satellites,” Ford said. “This is the sort of thing that could get out of hand and go very badly rather quickly.” The UK called the alleged test “a threat to space systems on which the world depends” – meaning use of such weapons could, in theory, produce an instant global security and communications blackout.

Yet in relaunching US space command last year, Donald Trump also pointed to space as the next great-power battlefield. Nato secretary-general Jens Stoltenberg says the alliance will not deploy weapons in space but is obliged to defend its interests, which include 2,000 orbiting satellites. For Nato, too, space is now an “operational domain”.

New and “improved” nuclear weapons are proliferating in parallel with the race for space. According to the Stockholm International Peace Research Institute (Sipri), nine states – the US, Russia, China, Israel, the UK, France, India, Pakistan and North Korea – together possess about 13,400 weapons. While the overall total is falling, “retired” warheads and bombs are being replaced by more powerful, versatile devices, such as smaller, “use-able” US battlefield nukes.

“All these states are either developing or deploying new weapon systems or have announced their intention to do so,” Sipri’s annual report said. The US and Russia each possessed about 1,550 deployed, long-range weapons, while China had about 300. Both the US and Russia were spending more and placing greater reliance on nuclear weapons in future military planning, it said, while China was rushing to catch up.

“China is in the middle of a significant modernisation of its nuclear arsenal. It is developing a so-called nuclear triad for the first time, made up of new land- and sea-based missiles and nuclear-capable aircraft. India and Pakistan are slowly increasing the size and diversity of their nuclear forces,” Sipri reported. Meanwhile, North Korea continued to prioritise its military nuclear programme, while conducting “multiple” ballistic missile tests.

Trump looks set to scupper New Start on the spurious ground that it does not reduce China’s much smaller arsenal.

“Instead of planning for nuclear disarmament, the nuclear-armed states appear to plan to retain large arsenals for the indefinite future, are adding new nuclear weapons, and are increasing the role such weapons play in their national strategies,” a Federation of American Scientists survey said. It estimated about 1,800 warheads were kept on high alert, ready for use at short notice.

Russia claims to lead the world in developing hi-tech weaponry. Speaking in July, Putin boasted that Russia’s navy was being equipped with nuclear-powered hypersonic cruise missiles, which supposedly have unlimited range, and submarine-launched underwater nuclear drones.

Trump looks set to scupper New Start, which expires in February, on the spurious ground that it does not reduce China’s much smaller arsenal (which it was never intended to do). He has previously reneged on the 2015 Iran nuclear treaty, the 1987 Intermediate-range Nuclear Forces treaty, and is said to favour resumed nuclear testing in Nevada in defiance of the 1996 Comprehensive Nuclear-Test-Ban treaty.

Like Britain and other signatories, the US continues to fail to fulfil its obligation under the 1970 Nuclear Non-Proliferation treaty “to pursue nuclear disarmament aimed at the ultimate elimination of nuclear arsenals”. Despite its acute financial situation, Britain remains committed to replacing its Trident missile system at an estimated cost of £205bn over 30 years.

While nuclear weapons have not been used since 1945, great-power military flashpoints are increasing the risk that they might be. These potential triggers include the South China Sea, Taiwan, the India-Pakistan and India-China borders, the US-Israel-Iran conflict, North Korea and Ukraine.

Heightened international tensions and collapsing arms-control regimes only partly explain the accelerating pace of nuclear rearmament. Resurgent nationalism, authoritarian rightwing populism, revived or new territorial rivalries (as in space), the bypassing of the UN and multilateral institutions, and a shifting economic and geopolitical power balance are all aggravating factors.

But so, too, is amnesia. Seventy-five years after Armageddon was visited upon the people of Japan, the world seems to have forgotten the truly existential horror of that moment. A history lesson, and a renewed debate, are urgently needed.