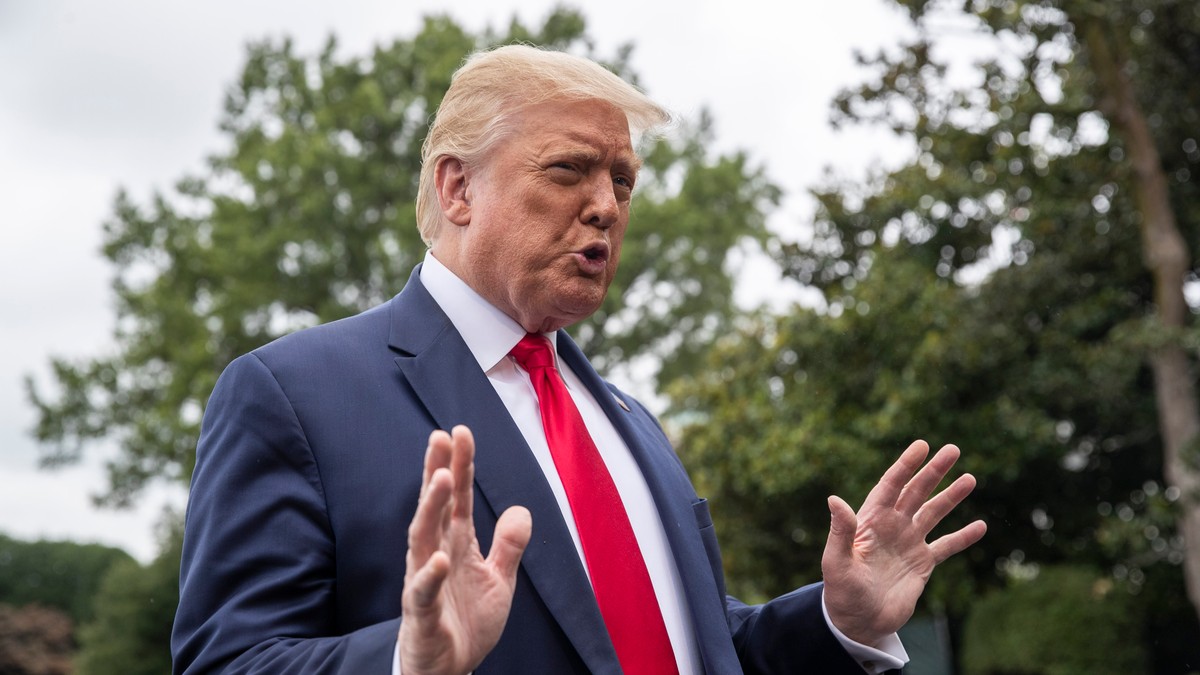 WASHINGTON — President Trump hit a dangerous new low with his Thursday attacks against mail-in voting, when he suggested the election should be postponed and insisted that it be called on election night, “not days, months, or even years later!”

But while Trump can’t move the election, he’s doing everything he can to discredit its results and make it as hard as possible to vote by mail, even as his rhetoric has made mail voting a much more popular option for Democrats than Republicans.

That’s created a toxic situation where Democrats are increasingly likely to vote by mail in the face of the coronavirus pandemic, while Trump and the GOP dig in against reforms that could help states’ and counties’ rickety and underfunded voting systems avoid disaster on Election Day. And it means in a close election, local failures in mail voting and U.S. Postal Service snafus could easily trigger a national crisis.

It will take days or weeks for a number of states to count up their ballots and determine who’s won in close contests. That’s normal — states that regularly vote by mail in large numbers, like Arizona and California, always take weeks to count their ballots. But there are just more states doing it this year, which gives Trump the chance to lie that the election is being rigged against him.

A bigger risk than widespread voter fraud, which Trump rails against but is relatively uncommon, is voter disenfranchisement. All of a sudden, a ton of mail votes might not get counted because of structural problems with an outdated and untested mail voting system — and they could be predominantly Democrats’ votes.

“County clerks and election officials across the country are going to be overwhelmed.”

“It’s going to be a mess,” said Rory Cooper, a longtime GOP strategist and Trump critic who worked on mail voting on President George W. Bush’s 2004 reelection campaign. “County clerks and election officials across the country are going to be overwhelmed. We do this every two years, but we’re adding a global pandemic and an irresponsible president on top of it. It’s creating a powderkeg that will blow unless there’s a landslide election.”

American elections are often sloppy affairs. Voters get disenfranchised because active voter suppression efforts combine with mistakes by incompetent and underfunded local officials — and voters’ own mistakes. And while Democrats have been singing the praises of mail voting, it’s always more complicated and prone to problems than in-person voting. It simply requires more steps, gives voters fewer opportunities to clear up mistakes, and always leads to a higher rejection rate of ballots.

The coronavirus pandemic has made this problem even worse. Usually, between 1% and 4% of mail ballots get rejected. That’s already a high number that could swing a close election, but that number has grown during this summer’s primaries, as more states get inundated with mail votes. New York’s mail-ballot rejection rate in its June primary was as high as 20% in parts of the state.

While that’s higher than most places, voting rights experts think rejection rates could double this year. People voting by mail for the first time are more likely to make mistakes that get their ballots disqualified — and heavy demand driven by the coronavirus has caused problems with people not getting their ballots in time.

On top of that, GOP efforts to gut the U.S. Postal Service have caused major delays in their system that have led to ballots not arriving in time for people to vote — and other ballots being rejected because the USPS didn’t get them back to county clerks on time. The USPS is experiencing extensive backlogs in mail delivery due to intentional changes made by a Trump appointee who has forced major changes to how the government body operates. Many states don’t count ballots unless they’re received by Election Day.

If the election were held today, none of this would matter much. Joe Biden leads Trump by more than eight points nationally in FiveThirtyEight’s latest poll average, and has leads that are outside polls’ margin of error in a swath of swing states that will determine the presidential election. It may take a few days to get final election results in enough states to know for sure that Biden has won, but in that instance there should be little doubt — and Republicans will have little incentive to back Trump up even if he claims he’s been cheated.

But even a small shift toward Trump could make the presidential election much closer in the Electoral College, leading to a series of long, drawn-out court battles over mail votes. And no matter how close the Trump-Biden contest ends up, there will be close Senate and House races that will need recanvassing — where court fights over mail votes could determine key races.

Recent polls show that Democrats are twice as likely to be planning to vote by mail this fall than Republicans.

That’s a huge swing from past elections: Only 29% of Democrats in Priorities’ polling said they voted by mail in past elections, and just 19% of Republicans said they did.

This is starting to play out in real time. In North Carolina, there’s been a 700% spike in Democrats’ requests for mail ballots since the same time in 2016 — but just a 50% jump in GOP numbers, according to analysis from Catawba College professor Michael Bitzer.

This imbalance can translate to eye-popping swings from Election Day to the final vote count that might look fishy, even though they’re not. In a recent House special election in upstate New York, the Republican led by 40 points on election night — but once mail ballots got counted, he ended up winning by only 5 points.

Republicans actually used to vote by mail in higher numbers than Democrats — seniors and members of the military, two GOP-skewing groups, are especially reliant on that form of voting. But Trump’s sustained assault on the process has changed that.

The Cook Political Report’s Dave Wasserman pointed out how dramatically this new dynamic could impact the election. In a recent NBC News piece, Wasserman tested a hypothesis where 42% of a state’s ballots are cast by mail, and Biden wins mail ballots by 80%-20% while Trump wins other ballots by 70%-30%. If every ballot was counted, Biden would win by 51%-49%, but if 8% of absentee ballots were ruled invalid, Trump would pull out the narrowest of victories.

Democrats are well aware of the risk. Priorities USA is spending $32 million on voting rights litigation this election — more than 10% of its total election spending. They’re spending another $24 million on a mobilization, vote by mail and persuasion campaign, some of which will be used to make sure voters know how to cast ballots that are less likely to be tossed out.

“There’s always a disproportionate impact on vulnerable communities, and we have to make sure unnecessary barriers at the state level don’t further complicate the problem,” said Priorities USA Voting Rights Director Aneesa McMillan.

They’re being matched by the Republican National Committee, which is spending more than $20 million on a bevy of court cases as well as efforts to recruit “poll watching” volunteers they say will monitor potential voter fraud, what Democrats see as an intentional effort to intimidate people not to vote. The two parties, along with civil rights and voting rights groups, are currently engaged in dozens of lawsuits across the country over how the actual election process will operate between now and Election Day.

Republicans are actively warring against steps that would help alleviate problems. The last round of coronavirus stimulus included $400 million to help states prepare for elections in the time of a pandemic, but voting rights experts say they need at least $2 billion and ideally more like $4 billion to buy new machines and postage as well as hire and train the workers they’ll need.

That money was included in House Democrats’ next coronavirus bill. But Senate Republicans have dug in against this money, and it’s unclear what, if any, funds will be granted to the states. Even if the eventual bill includes more funds for elections, time is running out for states to actually be able to use that money effectively to prepare for an election where in some states ballots will need to start going out in just weeks.

Democrats also want money to help fix the USPS — but Republicans have balked at that as well.

(The two sides remain far apart on what will be included in the next bill, but something is likely to pass in the next few weeks, as inaction would deepen the ongoing economic crisis.)

Simple logistical problems and untested systems are another big threat. A lot of states are simply not used to large numbers of mail votes. Michigan and Pennsylvania, two critical states on the election map, didn’t allow widespread mail voting until 2018, and have never contended with presidential-level turnout with mail voting. Pennsylvania’s primary-election votes took weeks to count up and were riddled with problems, with tens of thousands of voters possibly receiving ballots too late to vote. And that was in a light-turnout primary — a trickle of ballots to process compared to the coming deluge.

“When you’re trying to run an election in the midst of a pandemic, everything is harder. We know that election officials do not have the resources they need,” said University of California-Irvine professor Rick Hasen, an election law expert. “There’s going to be an increased demand for absentee balloting and there’s not been a lot of thinking about what it’ll look like if voters demand ballots and the funding and infrastructure are not there. It’s going to be a big mess.”

Voting rights experts are most worried about delays in three swing states — Michigan, Pennsylvania and Wisconsin — that all just happen to be the states that handed Trump victory in 2016 and are arguably the most important to this year’s results. Those three states don’t allow mail ballots to be prepared for counting until Election Day.

Michigan’s ongoing struggles heading into their state-level primaries next week show how messy this will be. The GOP state Legislature has so far refused to allow Michigan’s secretary of state to begin counting mail ballots earlier than Election Day, a move that all but guarantees that ballots will be delayed. And local officials are so concerned about post office delays that a full week before Election Day some started advising voters to turn in their mail ballots in person rather than risk mailing them back.

The Michigan Supreme Court declined to hear a case that would have allowed ballots postmarked by Election Day to count — not just the ones received by Election Day. That risks disenfranchising broad swaths of people who send in their ballots on time but because of mail delays don’t get them in.

All this is leading to a murky, distrustful situation where court fights or even a battle within Congress could determine the election — and one side may not accept the results.

“The way we hold elections is to pick a winner and the system has to be capable of producing that and we all as voters have to be able to accept the result even if the candidate we voted for didn’t win,” said Ohio State University professor Ned Foley, an expert in contested elections. “The worst thing that can happen is a repudiation of the certified popular vote tallies without any basis for that repudiation. That’d be a concession that the American people can’t do self-government.”

Cover: President Donald Trump speaks with reporters as he walks to Marine One on the South Lawn of the White House, Friday, July 31, 2020, in Washington. Trump is en route to Florida. (AP Photo/Alex Brandon)