Polly MacFarlane always feels nerves and excitement building in her stomach as the train pulls into Edinburgh during the festival, clutching her hula-hoops and spangly leotards as she hurries towards the Royal Mile.

MacFarlane is a street performer and cabaret act known as Polly Hoops, and August in Edinburgh was her biggest month of the year. “It’s always exciting and you get the butterflies coming into Waverley,” she said. “It’s so beautiful and quite nerve-wracking doing the Fringe but it’s always wonderfully familiar as well.”

For the last 70 years, the beginning of August would herald the start of the world’s largest annual arts, drama, literature and music jamboree. But for the first time since 1947, the year the international festival was launched in the aftermath of the second world war, Edinburgh’s theatres will be empty, shuttered by the coronavirus pandemic.

The Royal Mile, the medieval, cobbled street where MacFarlane, 30, would perform to a crush of onlookers, will be silent. Edinburgh’s elegant squares, usually submerged under tented cities, beer halls and ticket booths, will simply host pigeons, casual visitors and lunchtime snacks.

After several years learning her craft in Covent Garden, MacFarlane quit London for Scotland, having experienced the intensity of the Fringe festival; like thousands of festival performers, it was a social and artistic experience without rival. 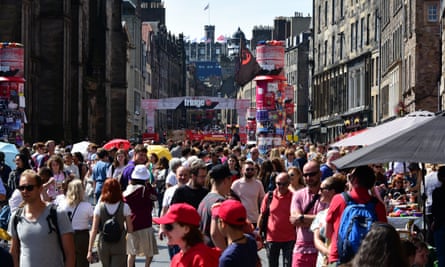 Festival-goers on the Royal Mile in 2019. Photograph: Ken Jack/Getty Images

The cancellation of all Edinburgh’s summer festivals earlier this year has left MacFarlane with a deep sense of loss. “From a social standpoint it’s really sad,” she said. “Everyone can relate to that with Covid, it’s that isolating experience of really missing people.”

Sophie Moxon, another English emigre drawn from West Yorkshire to Scotland by the festivals, builds one of Edinburgh’s most famous tented cities. As executive director of the international book festival, Moxon, 44, oversees the dense encampment of festival tents erected in Charlotte Square from late July, its small army of staff, the bookshops and catering.

This year, rather than host 900 readings and events, and 250,000 visitors in the gardens, the book festival will stream 140 events online, organised by staff working on laptops at home. Charlotte Square will remain empty. “There is a sense of loss. The thing I love most about working for the festival is bringing together this incredibly diverse family of people,” she said. “There would be an incredible buzz and energy.”

It has had a heavy impact on William Burdett-Coutts, the founder and director of Assembly Festival, one of the biggest Fringe production houses. Burdett-Coutts has worked at every Fringe without fail for 42 years; this year his company was due to be celebrating its 40th anniversary on the Fringe.

This year, he expected to host 5,000 performances and 220 shows across a network of venues across the city, working seven days a week from 10am to midnight; it was a frenetic carousel of theatre shows, receptions and meeting new artists and producers. “There was always things happening, always something going on,” he said.

The festival’s cancellation, he said, “is the most catastrophic thing which has happened in my lifetime. The gathering of people from around the world in Edinburgh was just extraordinary; it was just a huge arts and entertainments party.” He is instead kicking his heels in Portugal, feeling, he said, a sense of mourning. 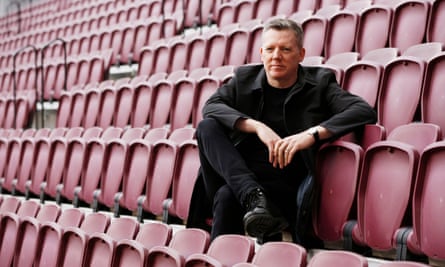 ‘This a hiatus … People will be back’ … Festival director Fergus Linehan. Photograph: Murdo MacLeod/The Guardian

David McMillan, 69, is one of tens of thousands of workers in Edinburgh suffering heavy financial losses from the festival’s cancellation. McMillan is a cabby who bought the city’s first electric London taxi; he makes up to 25% of his annual income working seven days a week during the festival.

Losing that money is “devastating”, he says. “You work through the year for your bread and butter, but the festival is when you get the cream.” He knows of some drivers who have gone out of business now the festivals are cancelled.

McMillan also misses the energy, humour and diversity his customers bring. “I absolutely love the festival,” he said. “Everybody is having fun, everybody is having a good time, enjoying their shows or just chatting.”

Festival directors such as Fergus Linehan, who runs the international festival, which puts on the core programme of classical concerts, opera and ballet, believe this year needs to be seen as a temporary pause.

Their challenge, he said, was to keep the show on the road, embracing new digital and online technology but planning to resume live events. “People do talk as if Covid is never going to end. This a hiatus,” he said. “There are elements of the physical event which cannot be replicated digitally … People will be back.”