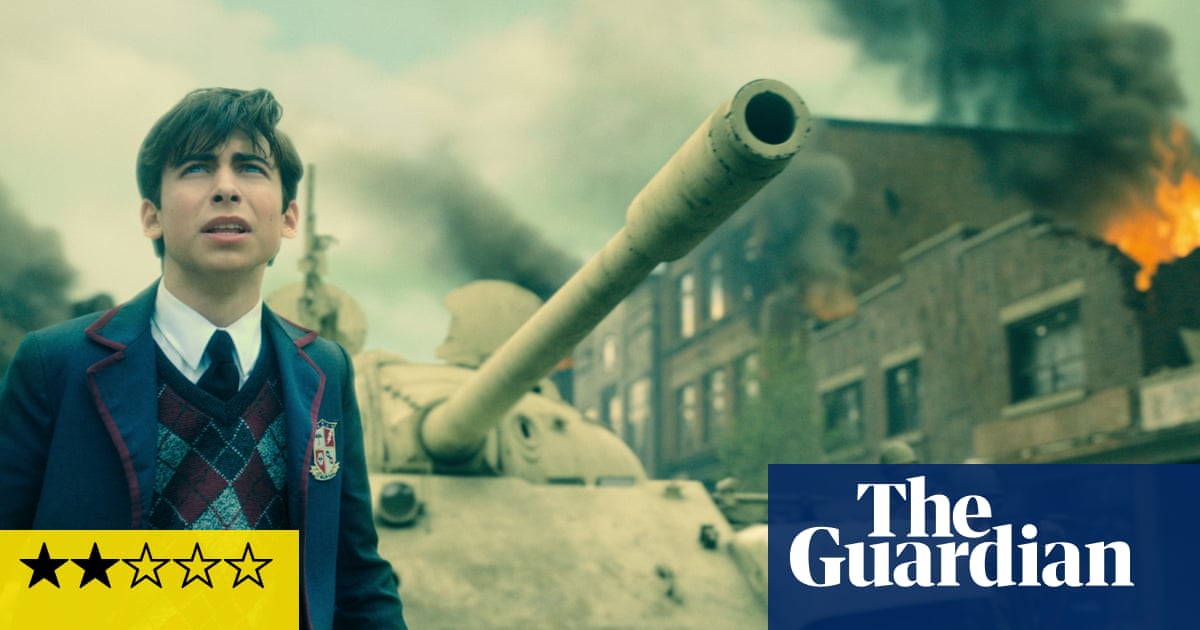 “You don’t understand!” Diego yells at his therapy group. “They’re going to kill the president a week from today!”

It is Dallas, 1963, and the six superheroes of The Umbrella Academy (Netflix) have time-travelled to town to avert not one, but two disasters. First, they have to kill Lee Harvey Oswald before he can assassinate John F Kennedy and then, even more pressingly, they have to stop nuclear apocalypse. The clock is ticking. Or maybe two clocks are ticking.

Typically, our bumbling heroes are doing a terrible job at saving the president and the world. Diego gets an antipsychotic sedative shot in the neck, a nightstick to the nuts and and face time with a padded cell for trying to escape to kill Oswald. Luther, whose biceps can be seen from space, is wasting his talents as a bare-knuckle prize-fighter for nightclub owner Jack Ruby, the man who, in reality, did kill, albeit too late, the president’s murderer.

And Klaus who, like Marty McFly when he time travels from 1985 to 1955 in Back to the Future, gets sidetracked from his manifest destiny by sartorial minutiae. “Are hats back?” he asks, spotting two blokes accessorising trilbies with – there is no easy way to say this – short-sleeved shirts.

Hold on, you might well interrupt. Apocalypse again. Really? Didn’t the Umbrella Academy avert an apocalypse in series one? Yes, it did. And now it is averting another, in series two? Don’t the writers realise there is a diminishing marginal utility rate to apocalypses as dramatic devices?

Excellent questions. Let me explain what is going on. The Umbrella Academy’s superheroes are followed wherever they go by apocalypses. They arrive at some point on the space-time continuum and their first order of business is to stop the world ending. But to do so they have to battle three white-haired, leather-coated, tooled-up nihilists from The Division who are bent on ensuring Armageddon goes down as planned. The result? Lots of overlong slo-mo scenes of decorous Keanu-Reeves-circa-The-Matrix silhouettes walking down endless corridors unloading ordnance at scarpering superheroes, heedless of the mess that minimum-wage cleaners will have to sort out, not to mention the body count.

The premise of this adaptation of Gerard Way and Gabriel Bá’s comic book is shaky. If the kids from the Umbrella Academy are, as we learned, followed through space-time by apocalyptic scenarios, surely the right thing to do would be for them to kill themselves for the greater good, rather than repeatedly recreate circumstances in which they have to thwart apocalypses that imperil humanity.

There are economic reasons for ignoring this modest proposal. The Umbrella Academy was the third biggest hit on Netflix last year, following Stranger Things and The Witcher, so giving the punters more of the same makes business sense. But why is this risible guff so popular? Because it grafts on to the superhero format another genre – the dysfunctional family drama. It may come on like Avengers: Age of Ultron, all fatuous fisticuffs and inscrutable nonsense, plus a nice line in mock-heroic subversion of the Marvel/DC franchise à la The Tick, but The Umbrella Academy’s real appeal is like that of The Royal Tennenbaums, The Sopranos or Tracy from Coronation Street.

The sibling superheroes are all orphans, born to different women who gave birth on the same day they became mysteriously pregnant (because that could definitely happen) and taken up by an eccentric billionaire with a talking chimp butler who tasked them with using their superpowers to battle crime while wearing school uniforms (no one, incredibly, called social services). One can see the future, another is good with knives and yet another is super strong.

But now, like Haley Joel Osment or Emma Watson, these child stars are grown and have issues. Not least Vanya (the sad-eyed Ellen Page), who wrote a book about being raised in a superhero family while having no special powers of her own.

If you were raised in a troubled family (and if you say you weren’t, you definitely were), this stuff will resonate. Even more so if you were raised by a talking chimp butler and have trouble fitting into society because of your special powers and weird clothes. Which is certainly my back story and, judging from your profile, yours too.

• The Umbrella Academy starts on Netflix on 31 July.