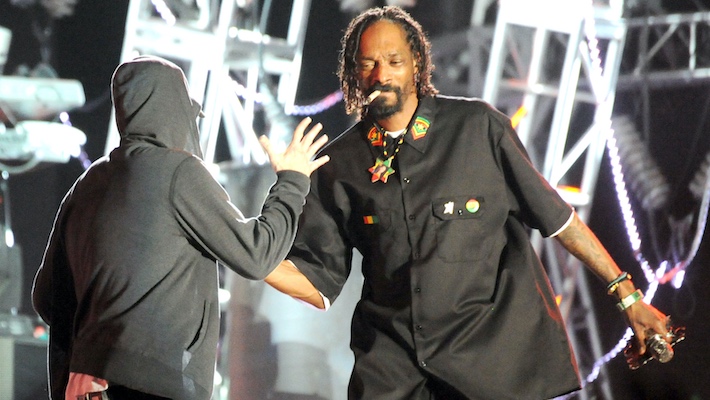 Snoop Dogg sparked conversions among hip-hop fans this week when he declared that Eminem isn’t one of the ten best rappers of all time. He made the claim during a recent Breakfast Club interview, but now, he has shown some love for Eminem.

Sharing a photo on Instagram of them on stage together at Coachella in 2012, Snoop captioned his post, “Slim shady wit silky slim, gang gang.”

Snoop didn’t exactly seem to disparage Eminem during his Breakfast Club interview, and even had praise for him, saying, “Eminem! The Great White Hope! White rappers had zero respect in rap [before him].”

However, he then went on to say, “[Dr. Dre] has probably put Eminem in the position where he could be labeled as one of the top ten rappers ever. I don’t think so, but the game thinks that he’s top ten lyricists and all that that comes with it. That’s just because he’s with Dr. Dre and Dr. Dre helped him find the best Eminem that he could find. […] There’s just some n****s in the ’80s that he can’t f*ck with. Like Rakim, like Big Daddy Kane, like KRS-One, like LL Cool J… shall I go on? Like Ice Cube.”

Snoop has had praise for Eminem before: After Em’s Trump-bashing freestyle at the BET Awards in 2017, Snoop said, “He’s a real n****. That’s all I’m gonna say. That’s what real n****s do, he did what he was supposed to do. It feels good to have a white man say what we’ve been wanting to say for a long time and make it stick.”