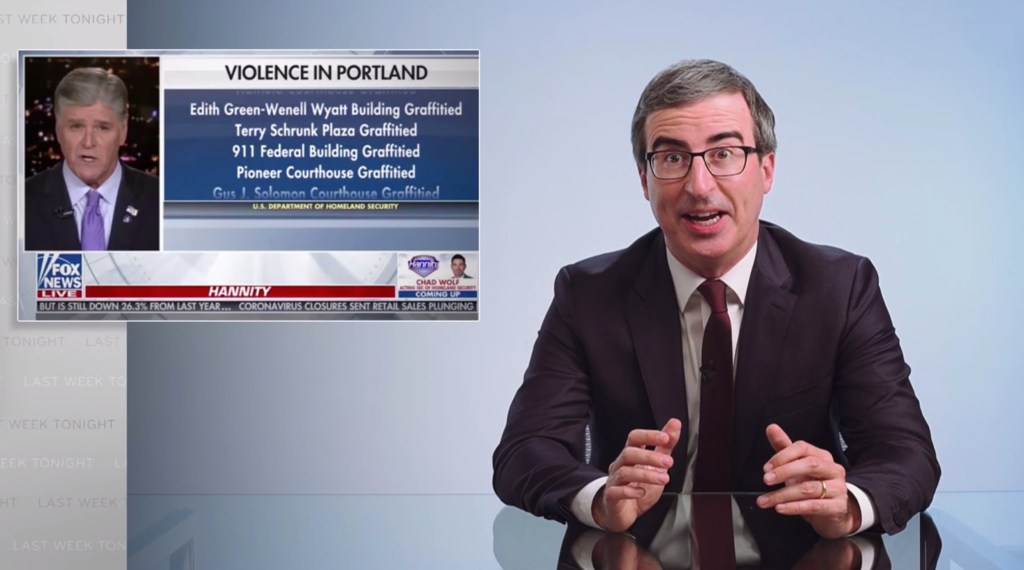 In Sunday’s episode of Emmy-nominated series Last Week Tonight, host John Oliver condemned Fox News for the way the “news” channel has been covering the Portland protests. In response to Sean Hannity calling the “VIOLENCE IN PORTLAND,” as an overstated graphic read, “insane,” Oliver fired back, “Yeah, it is insane — because that tone does not honestly reflect the conditions on the ground. That ‘fire-bombing,’ for instance, seems to be a reference to either a firework or a small fire that was set, which is significantly less dramatic than he’s trying to make it sound. And that rolling list next to Hannity’s head is mostly graffiti! In fact, graffiti is listed 12 times in a row there under the headline ‘VIOLENCE IN PORTLAND,’ which is a huge overstatement.”

Hannity has since responded to Oliver’s criticisms, even if he doesn’t “live my life too concerned about what John Oliver thinks.” The Fox News personality was a guest on SiriusXM’s Jim Norton & Sam Roberts radio show, where he said, “Well, John Oliver, number one, he’s got a couple of problems. His big problem is, he’s not funny. If you’re funny, I don’t care what you say.” I mean, Peabody Award-winning Last Week Tonight is no canceled-after-one-season The 1/2 Hour News Hour, but it’s pretty good.

“I don’t spend a lot of time watching comments that people make about me because I actually have a life and have better things to do. If I want to feel bad, I could always Google my name and then find out that I’m the second coming of the devil… I don’t really expect John Oliver to know facts or truths, and I’m sure he’ll selectively pick out ‘well, these are the peaceful protestors,’ and ignore the rocks, the bottles, the bricks, the Molotov cocktails, the gunshots, the fireworks, and everything else being hurled at officers around the country.”

(Via the Hollywood Reporter)