The government’s last-minute delay to lockdown easing has left theatres in England scrambling to cancel performances for this weekend.

Great Yarmouth’s Hippodrome Circus had been due to open its circus summer season on Saturday. Jack Jay, the ringmaster and producer, said that they heard the news 20 minutes before starting their dress rehearsal.

The Hippodrome, which intends to keep the cast in town, will now take a significant financial hit at the box office. The theatre stages its circus spectacular 13 times a week, so at least 26 performances will be affected by the delay, which is set to be a fortnight or longer. Jay hopes customers will be willing to rearrange their bookings for a future date but as many of their audiences are tourists he fears that there will be a number who can’t rebook. The decision to postpone lockdown easing could also affect customer confidence over the summer, Jay warned.

The venue’s usual capacity of around 850 has been reduced to approximately 300 with social distancing measures, so the profit margin is already slimmer. “The window for us to recoup costs from our show is closing,” Jay added. The Hippodrome Circus summer season ends on 20 September, to coincide with the end of the tourist season and school holidays. The summer show usually opens in mid-July. When the announcement was made two weeks ago that indoor performances could reopen with social distancing from 1 August, as the fourth stage in the government’s five-step plan for reopening arts venues, Jay and his team acted swiftly and “basically put a whole new show together”. 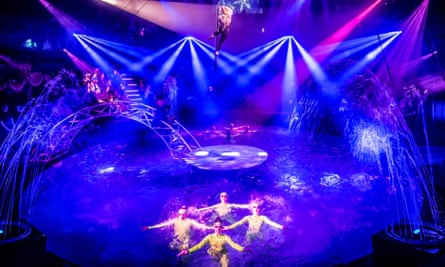 ‘It’s a scary time to be a producer’ … the summer spectacular and water show at Hippodrome Circus.

A cast of around 20, including dancers, aerialists, swimmers and acrobats, was brought to Yarmouth from around the UK. Jay said that while the delay was disappointing and difficult to deal with, the government was showing a dynamic approach in reacting to the pandemic. “If they went the other way and said there could be nothing until 2021 then that would be worse.” At least there was now another date, 15 August, to work towards he said, while admitting: “It does put us in a scary situation – that you can have a few hours’ notice for such a big delay. It’s a scary time to be a producer.”

Relatively few theatres would have planned to open this weekend because it was only on 17 July that they were told socially distanced indoor performances would be permitted from 1 August. That left little time for rehearsals, marketing and implementing safety measures. Bridlington Spa, in Yorkshire’s East Riding, had sold out the first in a series of Comeback Cabaret nights on Saturday. Asa Elliott, who rose to fame on the ITV show Benidorm, had been due to perform. In a message to fans online he said: “I know that some of you have booked in advance and made long journeys to come down to Bridlington.” The postponed event will “100% still happen, we just don’t yet know when”, he said. Refunds are being arranged.

The Kenneth More theatre in Ilford, east London, had planned to reopen at under half its usual capacity on Saturday night with a socially distanced concert featuring performers from the local Redbridge Drama Centre. Sally Polden, who organised the event, said the theatre “is not only part of our local cultural offer but a lifeline for many involved”. She added: “We will not be defeated – as soon as we can reopen for live performance, our theatre is ready. We’ve contacted all customers and performers today who have been very empathetic, and are as sad as we are, but equally are ready to return and have the confidence that we can do this safely when permitted.”

London’s Phoenix Arts Club tweeted that being told to cancel its early August cabaret nights at such short notice “is not on” and that the government should “give proper notice” to venues. The union Bectu’s national secretary, Noel McClean, said: “What this announcement demonstrates is that theatre employers should be exempt from making contributions to the furlough scheme and that a specific fund must be set-up to support theatre freelancers. The arts recovery funding is still months away and clearly there are significant hurdles on the road to theatres reopening again.”

The union Equity said that Boris Johnson’s “11th-hour announcement” was “distressing news for members working in variety and indoor performance who were hoping to start earning again tomorrow”. Jon Morgan, director of Theatres Trust, said most theatres will not be able to put on productions until we reach stage five of culture secretary Oliver Dowden’s “roadmap” for reopening venues, which allows fuller audiences for indoor performances. “That is the most critical date for much of the sector,” he said.

Pilot schemes for inside performances are now also suspended for the first two weeks of August but outdoor productions with socially distanced audiences can still go ahead.