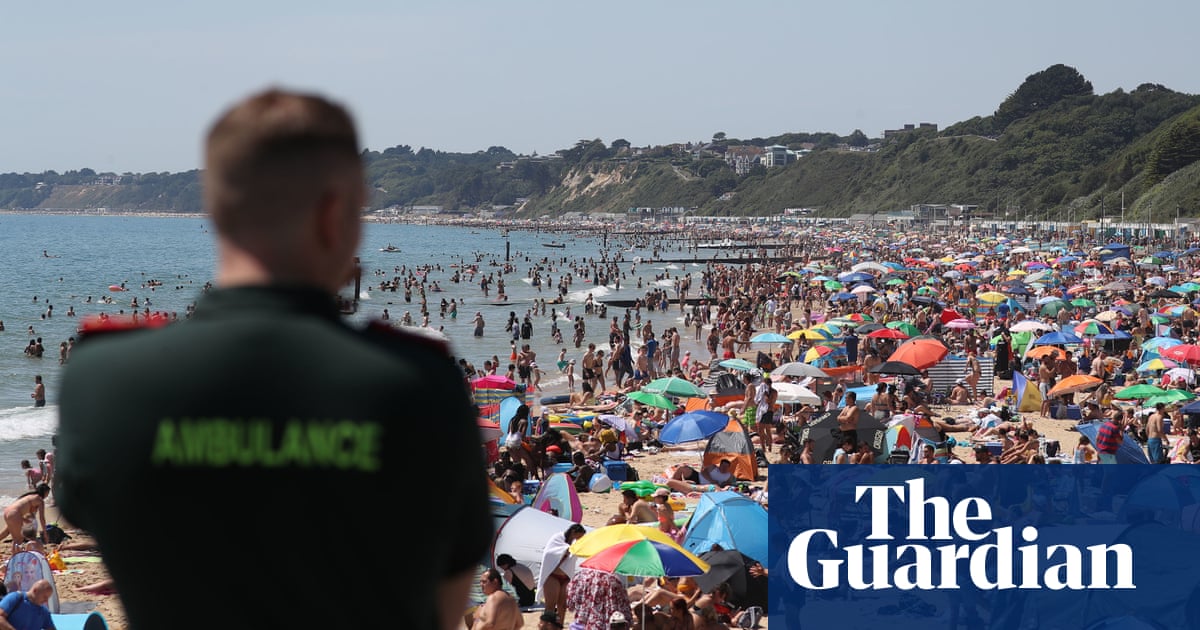 Police are ready to set up roadblocks, create diversions and close off sections of Bournemouth beach to prevent a repeat of last month’s chaotic scenes as a heatwave sweeps parts of the UK.

With temperatures forecast to hit 33C in parts of southern England, some officers have been asked to work extended shifts and weekend leave has been cancelled for others as the emergency services and the local council brace themselves for another major influx of visitors.

The moves come as the prime minister, Boris Johnson, urged people not to lose focus and risk spreading Covid-19. He said on Thursday: “Broadly speaking, the only way to control coronavirus is if everybody collectively obeys the social distancing rules and works together to drive the virus down.

“What I’m saying to people is: don’t lose focus, don’t lose discipline, continue to observe those guidelines, and if you have symptoms, get a test.”

A major incident was declared during June’s hot spell when as many as half a million people descended on the beaches at Bournemouth and Poole.

Supt Richard Bell, of Dorset police, said plans had been put in place to cope with another possible surge. But Bell said: “We are definitely not asking people to stay away. We welcome all visitors, but ask them to respect the environment and the community.”

He said the force did not expect the beaches to be as crowded this time because hotels, campsites, pubs and restaurants are open. In June, the beach was one of the few places people could go to.

A plan is also in place for Lulworth Cove in Dorset, another spot that has attracted crowds this summer. Bell said a one-way system used when the Camp Bestival was being staged would swing into operation if it got too busy.

Specific operations are being run to make sure powerboat and jetski users do not put anyone in danger and to patrol spots where drinking has become popular during lockdown.

The local authority, BCP council, has brought in new powers to tow vehicles away if they have been left in dangerous spots and is also asking people to use a new app it has developed that pinpoints busy parts of the beaches.

Cornwall council also asked people to plan their visits carefully. Rob Nolan, cabinet member for environment and public protection, said: “Visitors should be aware it’s not the Cornwall they would expect.” He said many campsites, B&Bs, pubs and restaurants were running at 50% capacity. “Do your research, book ahead,” he said.

Meanwhile, the Royal National Lifeboat Institution (RNLI) and HM Coastguard urged every parent to be aware of the potential dangers of the water, especially rip currents.

On Sunday, eight teenagers were rescued after being caught in a strong, fast-moving current off the beach at Aberdovey in mid-Wales, while at the start of the month RNLI lifeguards rescued 12 bathers who were swept off their feet by a rip current into rough seas at a beach in Cornwall.

Gareth Morrison, RNLI head of water safety, said: “We are seeing a spike in incidents this summer involving these potentially deadly currents, which move even faster than an Olympic swimmer and can quickly drag people into deep water a long way from the shore.”

Labour’s shadow tourism minister, Alex Sobel, welcomed much needed returning business to tourist towns, but urged people to act sensibly. Referring to the packed beaches, Sobel said: “Particularly at that point, people had been locked down for so long, and [there was] the sense of relief and euphoria. We’re probably at a slightly different place now – the restrictions have been easing gradually over the last six weeks, so it might be better now.

“But people really do need to act sensibly. If we don’t observe social distancing, we are increasing the chance of us having a local epidemic, which would mean local lockdown [and] potential for people who are going to those beaches becoming ill.”