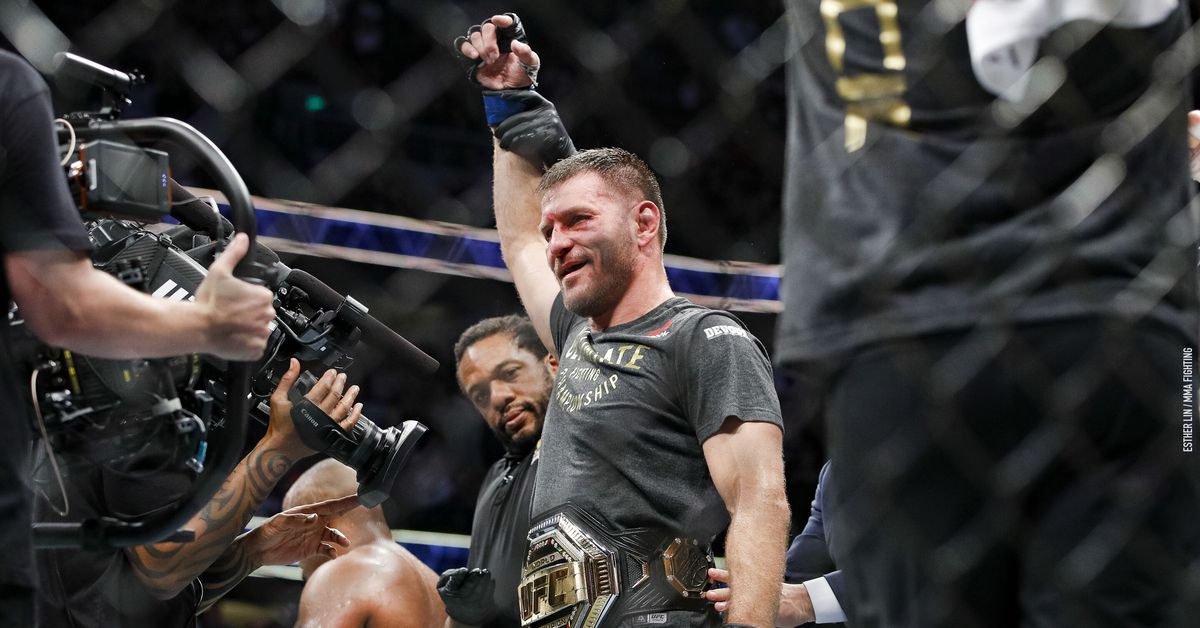 In a little over two weeks, UFC heavyweight champion Stipe Miocic and former heavyweight and light heavyweight champion Daniel Cormier will meet for the third and final time, but this time, things will be different. Because of the continuing coronavirus pandemic, when the trilogy fight between the two legends takes place, this time it will happen at the UFC APEX in Las Vegas, which means that instead of fighting in the normal 30-foot cage, Miocic and Cormier will be fighting in the smaller 25-foot cage.

The difference between the two cages has been the topic of much conversation since the UFC began hosting fights at the APEX, with many people believing that the smaller cage leads to more action-packed fights and a higher number of finishes. But while the fans may love the more aggressive cage, not everyone is as excited that UFC 252 will be employing it.

Speaking to ESPN recently, Stipe Miocic revealed that he originally lobbied for the UFC to use the 30-foot cage instead for the bout, but ultimately, that did not happen.

“A bigger cage is better of course,” Miocic said. “It is what it is. I’m not going to cry about it. I definitely tried to get a bigger cage, but it wasn’t in the cards. What are you gonna do? I’m not worried. My [gym’s] cage is the same size, and I’ve been working on everything.”

Having fought twice before, the smaller cage would seem to favor Daniel Cormier in this bout. Cormier certainly seems to think so and made no bones about it when the decision was announced, saying he intended to use the more confined space to wrestle Miocic. Even Miocic seemed to agree that being a wrestler “would be better” in the smaller cage but he also insists that he’s not worried.

“There are a lot more angles and stuff, and getting pushed against the cage, you don’t have that extra five feet,” Miocic said. “It’s a little bit different. We’ve definitely been training wrestling more. He said to bring my wrestling shoes, so he’ll definitely try to wrestle me, but every fight starts standing, don’t forget that.

“We’ll see. Take me down then. We’re wrestling? I thought we were fighting, but whatever.”

Fight they will. Soon, Miocic-Cormier 3 will join the ranks of UFC heavyweight title trilogies and, according to both Cormier and UFC President Dana White, more is on the line than just the heavyweight title. Both men believe this fight will determine the greatest heavyweight in UFC history, and Miocic agrees, though he’s not that concerned about that part of it.

“I guess so. I don’t know. Everyone’s been saying that (it will determine the greatest heavyweight ever), so whoever wins this fight is, apparently. I’m just ready for this fight. I’m not worried about what you call me after, baddest man on the planet, the greatest of all time, I don’t care right now. I’m just here to win.”

What the Heck, with Esparza, Kape, Boser, Millender, and Ronson.

Five fighters you should know heading into this weekend.

Heavy Hands. Discussing what happened at UFC Fight Island 3 and what’s to come this weekend.

Surely he’s not talking about Chimaev. . .

What fights besides Nate or Jorge make sense for Conor??

Are you going to punch me harder or something? The truth hurts sometimes. I’m trying to think, but I can’t remember another champ who didn’t beat ONE guy in the Top 5 to fight for a title.
“That must be soooooo frustrating” https://t.co/e4tMgs6MpB pic.twitter.com/I4xLgPpFjn

This is a banger.

This is weird but both men are for it and I think I am too?

Ponzinibbio finally ready to get back?