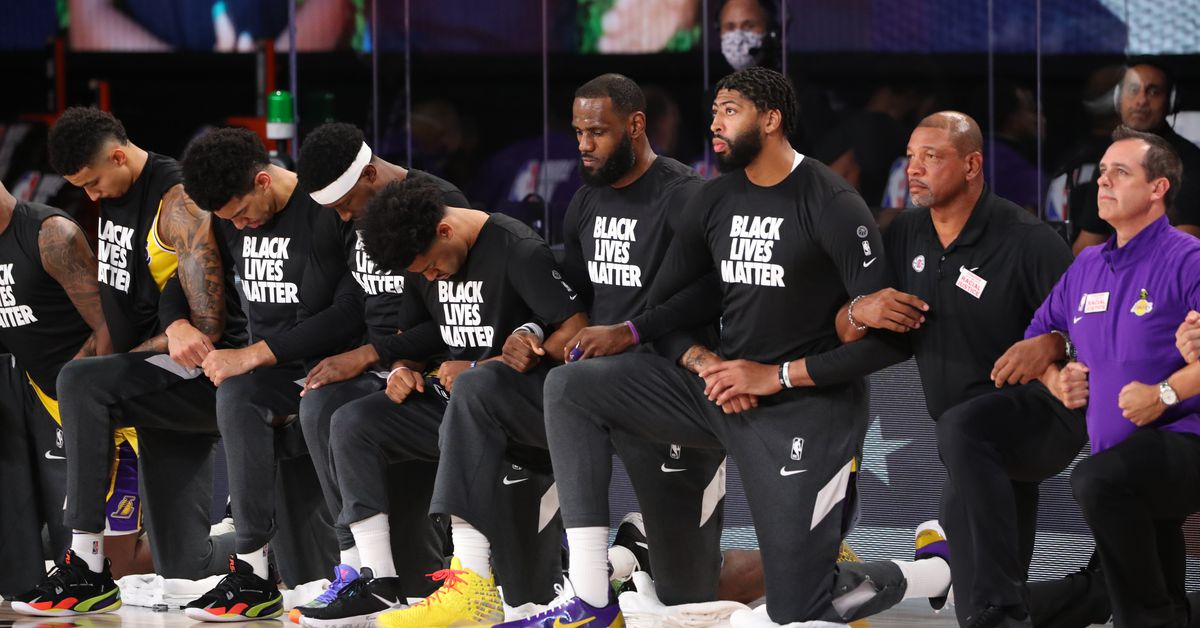 The NBA returned to play on Thursday night nearly four months after play was suspended due to the coronavirus pandemic, and began with a strong display of solidarity when the entire Utah Jazz and New Orleans Pelicans teams took a knee during the national anthem. All players, coaches, and even referees participated in the peaceful protest.

Both teams knelt together on the sidelines, and some locked arms while the anthem played. They also wore matching Black Lives Matter shirts during the anthem and throughout warmups.

A few hours later, the Los Angeles Lakers and Clippers did the same thing, locking their arms together while the anthem played.

The teams participated in the protest even though the NBA rulebook technically prohibits kneeling during the anthem. However, commissioner Adam Silver seemed open to the idea during an interview with CNN earlier this week, saying that we’re living through “a unique moment in history.” He also said on Good Morning America that he respects peaceful protests.

Leading up to the season’s restart, many NBA players have been vocal about their support for the Black Lives Matter protests that erupted across the country since the deaths of George Floyd and Breonna Taylor earlier in 2020. During the scrimmage phase of the restart, LeBron James, Tobias Harris, and other players called for the arrest of the police officers who killed Taylor in March.

These actions come nearly four years after Colin Kaepernick first knelt during the 2016 NFL preseason to draw awareness to racial injustice and police brutality. While his peaceful protest was occurring, no NBA players kneeled— likely largely because of the league policy.

Most players will also be wearing messages related to social justice on their jerseys throughout the rest of the resumed season. This show of solidarity seems to be a sign of more changes to come as the NBA and its players seek to make a stronger commitment to using their platform to promote justice during 2020.