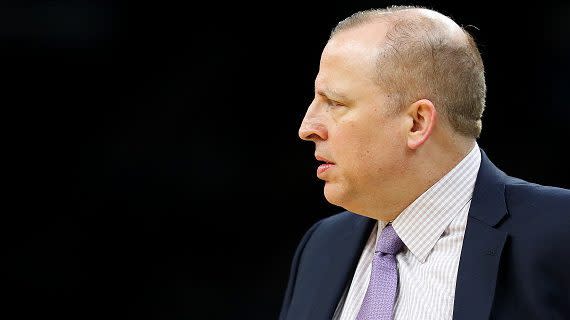 It’s going to take as long as it takes.

The Knicks have work to do, something new coach Tom Thibodeau and new team president Leon Rose were honest about at Thibodeau’s introductory (virtual) press conference Thursday. Rose, facing questions for the first time since becoming team president, said all the right things about the Knicks’ need to build a new culture. And that could take some time.

“We have not set a timeline. We are taking it one day at a time. We felt Tom was that coach who can take us with development to becoming a perennial winner. That happens one step at a time,” Rose said. “At the moment we don’t know what the roster will be moving forward. We have decisions we have to make. The important thing is to instill the culture, focus on the development and take it from there.”

That is both true and exactly what Rose should say. Rose having patience is not the concern, however, it’s the guy who hired him that everyone is watching.

Actions will speak louder than words.

The Knicks need to develop young players such as Mitchell Robinson and RJ Barrett. They also need a lot more talent on that roster; there simply is not enough. They need shooting, a true point guard to organize the offense and run the show, shooting, wing defenders, shooting, and whoever they draft this year in the lottery hopefully is a good shooter. There’s a theme there.

Rose sounded like a guy on the right path. He’s got his guy as the coach. It’s a good start.

Knicks’ Leon Rose on rebuild: “We have not set a timeline” originally appeared on NBCSports.com