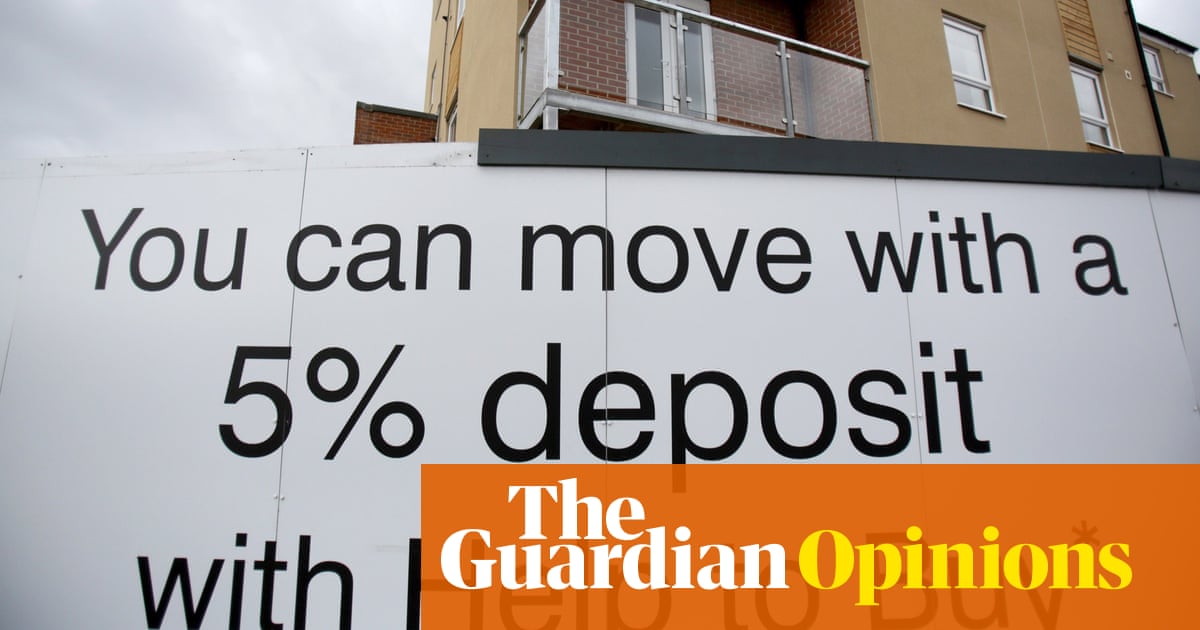 In moments of crisis, British chancellors have often resorted to throwing money at the housing market. Behind the slick PR machine, Rishi Sunak appears to be following the same old playbook. After cutting stamp duty in July’s summer statement, the chancellor is now reportedly planning to extend the help-to-buy scheme, which was due to be scaled back later this year and phased out entirely by 2023.

In Britain, we’ve seen our fair share of disastrous policies in recent years, but few have been as predictably self-defeating as help-to-buy. Introduced by George Osborne in 2013 as a means of helping people onto the housing ladder, it was clear from the outset that the policy would do more harm than good.

Help-to-buy was premised on the idea that the problem of unaffordable house prices could be solved by making it easier for potential buyers to access a mortgage. But given that mortgage lending is a key driver of house prices, the scheme always risked pushing up prices further, thus benefiting existing owners rather than new buyers. Predictably, this is exactly what has happened.

Since 2013, average house prices have increased by 38% – far outstripping growth in average wages. This has increased the value of the existing housing stock by more than £2tn – a handsome windfall for those lucky enough to share a slice of it.

Help-to-buy scheme may be extended beyond 2020 deadline

Although the scheme has supported around 272,000 property transactions, a recent National Audit Office report found that 63% of people buying a home under the scheme could have done so without help from the state. Earlier this year, the Financial Conduct Authority warned that help-to-buy customers are more exposed to changes in “economic conditions”, and face a greater risk of negative equity.

Seven years after the scheme was introduced, the prospect of home-ownership remains little more than a pipe dream for millions of households. The combination of surging house prices and stagnant wage growth has priced a whole generation out of the market. Today, those in their mid-30s to mid-40s are three times more likely to rent than 20 years ago.

For those stuck in the private rental market, the proportion of income spent on housing costs has risen dramatically from around 10% in 1980 to nearly 40% today – among the highest in Europe. And it is here that we find the dark side of Britain’s housing story.

While economists and politicians hail a booming housing market as a sign of wealth creation, in reality it’s one of the most powerful forms of wealth redistribution. When the value of a house goes up the total productive capacity of the economy is unchanged, because nothing new has been produced: it merely constitutes an increase in the value of an existing asset. While this increases the net wealth of individual homeowners, for everyone else it means facing higher rents in the rental market, and having to save more to take out a larger mortgage.

The reality is that the housing ladder is rather like a zero-sum game: the wealth enjoyed by some is mirrored by the deprivation and exclusion of others. In Britain, it’s about time we confronted this uncomfortable truth.

There was a time when increasing access to mortgages helped to spread the benefits of homeownership. But this always had diminishing returns: as banks have become ever more addicted to mortgage lending, a powerful feedback loop has emerged between mortgage lending, house prices and levels of household debt. Extending Help to Buy would be like trying to kick a drug habit by going on one final binge. It might delay the ultimate day of reckoning, but it will make the underlying problem much worse.

The biggest winners would be private developers, for whom help-to-buy has always represented an unprecedented gold rush. In response to the subsidies provided by the scheme, developers simply increased the price of new developments by the same amount, pocketing the difference. Help-to-buy subsidies have poured billions into the coffers of Britain’s large developers, leading to record-breaking profits and eyewatering bonuses. That these companies are among the loudest voices calling for the policy to be extended should serve as an obvious warning.

Help-to-buy is not the only policy that has contributed to Britain’s housing crisis, but it embodies the kind of doublethink that has long shaped British housing policy. Although intended to get more people on the housing ladder, the scheme has kicked the ladder ever further out of reach. Despite being designed to boost housing supply, the scheme has empowered private developers whose business model depends on releasing new homes at a painfully slow rate.

With Covid-19 further exposing Britain’s stark housing divides, the need to chart a new course has never been more urgent. The long term-aim must be to return to a society where houses are viewed as somewhere to live, not as vehicles for accumulating wealth. This means weaning ourselves off our addiction to house price growth, and embracing a new public-led approach to development.

Achieving this won’t be easy: it means taking on the unholy alliance of private developers, banks and – most difficult of all – ordinary homeowners, many of whom now view ever-rising house prices as normal and just. This requires careful handling, and a plan for moving forwards one step a time. If the chancellor is serious about tackling the housing crisis, then scrapping help-to-buy in its entirety would be a very good place to start.