If we are to assume a suitable element of normality will have returned by May, any Celtic celebration of a 10th Premiership title in succession will be quite the sight. Less is more has never applied to the Old Firm, especially where the making of history is concerned. Celtic will begin their season on Sunday as the legitimate favourites to become the first Scottish club to deliver 10 in a row.

Inside Scottish football’s parochial cauldron, that achievement is a key theme to the point where it is already all-consuming. Can Steven Gerrard – who hasn’t won a trophy in two seasons in charge of Rangers – break the run at such a crucial point? All logic would suggest not. Yet if Rangers somehow do win the league, the eruption will be felt in the southern hemisphere.

If it seems depressing that yet another season is framed in the context of only two clubs, such is the reality. Celtic are well within their rights to emphasise the significance of the achievement on the horizon, but it would only serve to highlight a broken model. “I want to win 10 in a row,” proclaimed Celtic’s new goalkeeper Vasilis Barkas, signed from AEK for £4.5m and speaking as if the feat is the talk of Athens coffee shops.

Since Aberdeen successfully defended the title in 1985, the top prize has been shared between the Old Firm. The full fiscal damage of coronavirus notwithstanding – and that is unclear – Celtic’s on- and off-field superiority is such that they should have eyes on 20 in a row. At what stage do even they encounter tedium?

In what may point to the competence or otherwise of Neil Doncaster, the Scottish Professional Football League’s chief executive, 11 months have passed since Ladbrokes served notice it would end its main sponsorship. No successor has been sourced. The blunt reality for Celtic as they push a storyline of recurring greatness is that too many people beyond Scotland’s borders have long since shrugged their shoulders.

Any 12-team league in which one club has an 80% chance of success and another 20% before a ball is kicked should not be sustainable on the grounds of competition alone. People buy season tickets to watch a format in which third place counts as success. 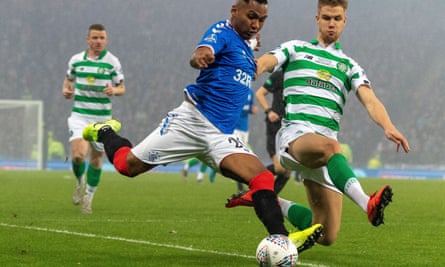 Alfredo Morelos in action for Rangers against Celtic in the Scottish League Cup final last December. It is likely the striker will be granted his wish of a move. Photograph: Colin Poultney/ProSports/Shutterstock

Germany and Italy have domestic football monopolies but Bayern Munich and Juventus are among the finest sides in Europe. When the Old Firm reached the last 32 of the Europa League, they were one step short of a public holiday being called. Scotland’s national team are still trying to scratch their way back towards relevance. The scale – economic and societal – of the country’s two biggest clubs is such that they can never be hauled in by others. Celtic regularly face league opposition with a 30th of their wage spend.

As things stand, the Old Firm have nothing in common with their fellow Premiership clubs other than a fixture list. If Celtic’s Covid-19 loss has reached £20m they can offset it with the sale of one player. Others in that division were wounded by a recent increase in testing requirements which cost £2,500 per week.

People in boardrooms at Celtic and Rangers are known to get weak at the knees when the idea of featuring in England’s top flight is mooted. The Old Firm regard themselves as superpowers, constrained by Scotland’s limitations. For years the notion of Celtic and Rangers jousting with England’s best has been laughed off – including by police forces – but plans to merge the Dutch and Belgian leagues have turned heads in Glasgow.

There should be a serious debate about whether Celtic and Rangers pursuing their broader ambitions, wherever that may be, can enhance the remainder of Scotland’s game. The sharing of championships and direct access to European money would provide clear benefits. It remains to be seen who would welcome two clubs from Glasgow, but the notion is nowhere near as damaging for the rest as many would portray.

Scottish football remains tarnished by the saga that prematurely ended the 2019-20 campaign and handed relegations to Hearts, Partick Thistle and Stranraer. That Hearts and Partick failed with a legal challenge against the sanction is, in some eyes, the end of the matter. It should not be. As the SPFL executive stood back, clubs virtually engaged in open warfare in the midst of a pandemic. The episode served to emphasise the Scottish game’s inadequate governance and a public relations model that Trotters Independent Traders would consider to be hapless.

Gerrard has gone public with his desire to add to his squad, as is the wont of any manager. Nonetheless, the former Liverpool captain has presided over significant wastage when it comes to transfer activity. It seems inevitable Alfredo Morelos will be granted his wish of a move. How Rangers replace his goals is one source of intrigue. Gerrard’s commitment to Ibrox is admirable but managers there, even of such high profile, do not tend to survive three trophyless campaigns.

In Neil Lennon, Celtic have a manager immersed in the club and its history. It is fitting he is in charge as they pursue their holy grail. To Celtic, and by association Rangers, it undoubtedly is. The bigger picture of how Scotland can possibly and positively remove itself from the same old routine should not be ignored.