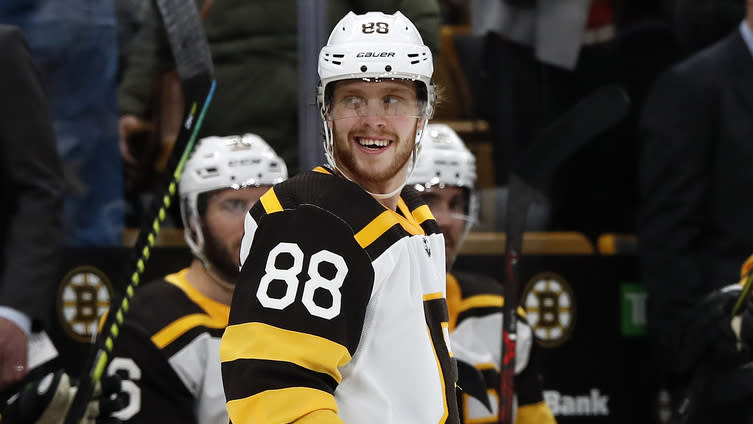 How else to explain the Boston Bruins star tweeting Wednesday that Washington Capitals winger Tom Wilson — he of 78 goals in seven NHL seasons — is “the best goal scorer in the league”? Pastrnak wouldn’t drop that hot take of his own volition, would he?

Following the Bruins’ exhibition game against the Columbus Blue Jackets in Toronto on Thursday, Pastrnak was asked to clear the air — and insisted he sent the tweet himself.

“I just felt like it,” Pastrnak told reporters in a Zoom press conference, via MassLive.com. “I wanted to say it. It was my opinion. Nobody hacked my Twitter. It was all me and it was my own fingers typed that in.”

“It was a little side bet with Tom from back in the day.”

So, it sounds like Pastrnak lost a bet to Wilson at some point in the recent past.

What exactly did the wingers wager on? Pastrnak wouldn’t elaborate — “That’s where I would like to leave it” — so your guess is as good as ours. The two did have a dust-up when the Bruins and Capitals met earlier this season, so maybe their bet stems from that.

Pastrnak — who scored the Bruins’ lone goal in Thursday’s 4-1 loss to Columbus — will see Wilson soon enough: Boston faces Washington on Sunday, Aug. 9, in one of their three Eastern Conference round-robin games of the NHL restart.