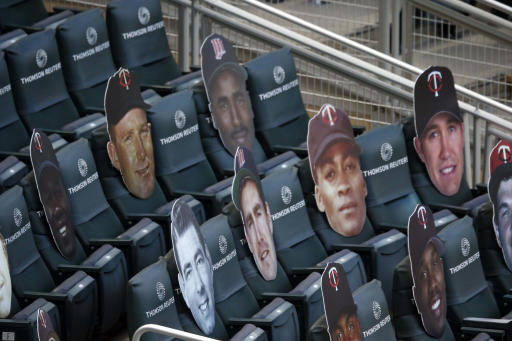 Cardboard faces, including some athletes and others, adorn seats behind home plate at Target Field as the Minnesota Twins host the Cleveland Indians in a baseball game Thursday, July 30, 2020, in Minneapolis. (AP Photo/Jim Mone)

MINNEAPOLIS (AP) — Cleveland’s Shane Bieber tied the major league record for strikeouts in a pitcher’s first two starts of the season, punching out 13 Minnesota Twins over eight innings in the Indians’ 2-0 victory on Thursday night.

Bieber (2-0) fanned 14 over six scoreless innings on Friday against Kansas City. His 27 strikeouts in the two games matched the record set by Karl Spooner of the Brooklyn Dodgers in September 1954 during the first two starts of his short career.

Facing a Twins team that came in with the second-best run differential in baseball, Bieber allowed three singles in his eight innings.

Francisco Lindor supplied all the offense Cleveland needed with a two-run homer in the third inning off Jose Berrios (0-1).