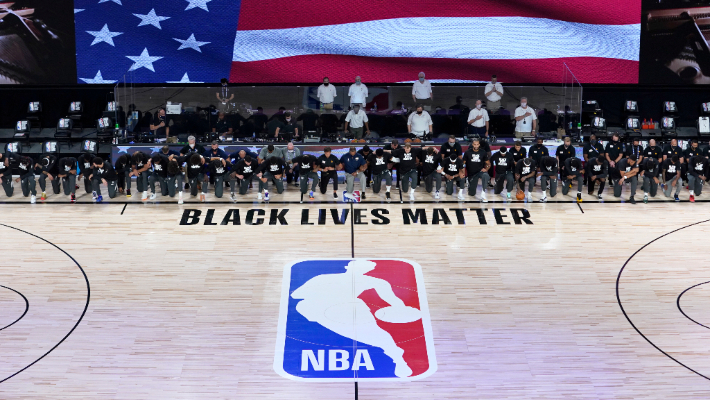 Thursday night’s NBA opener between the Jazz and Pelicans began with both teams lining up on the sideline by the benches and taking a knee during the national anthem above the Black Lives Matter lettering on the NBA’s restart court.

This was part of a planned demonstration of protest by the players, coaches, and referees, as they have been vocal for months that when the league restarts they need to use that platform to continue keeping messaging on the issues of systemic racism and social justice. While it was generally assumed this would be the case, NBA commissioner Adam Silver issued a statement on Thursday evening that the league would not be enforcing its rule that states players must stand for the anthem, noting the circumstances and the need to adapt to the current moment.

NBA Commisioner Adam Silver:
“I respect our teams’ unified act of peaceful protest for social justice and under these unique circumstances will not enforce our long-standing rule requiring standing during the playing of our national anthem.”

It is the right decision and, really, the only decision for the league to make, given that every player participated in the kneeling as well as coaches and referees — and it is expected that other teams will do the same as the bubble progresses. Handing out fines for that in this current moment would be exceptionally tone deaf and given the league has been active in working with the players association on ways they can keep advancing their social justice efforts, it’s unsurprising that they made this call.