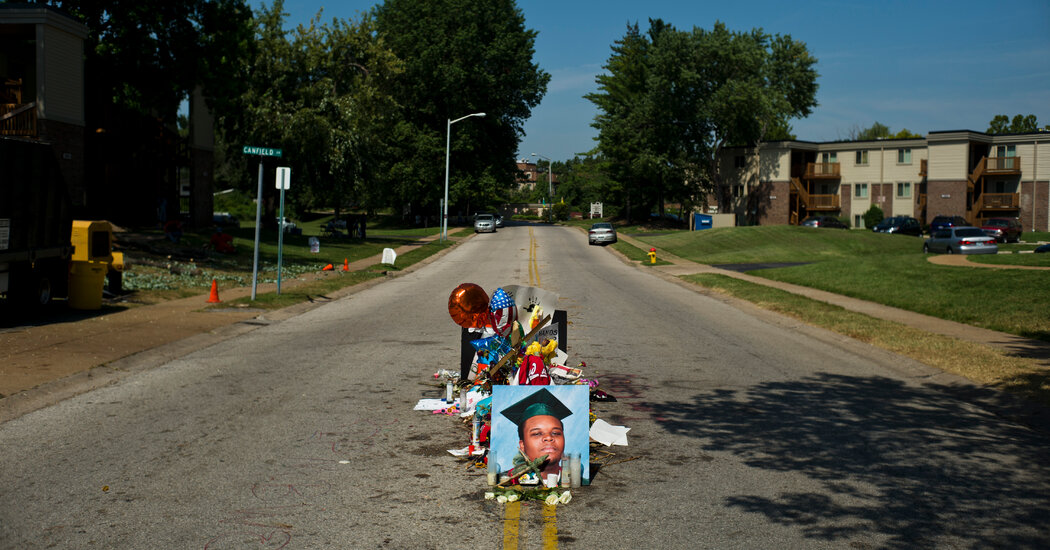 The white police officer who fatally shot Michael Brown, a Black teenager in Ferguson, Mo., six years ago will not be criminally charged, the St. Louis County prosecutor announced on Thursday.

The officer, Darren Wilson, already had been cleared by a grand jury and a federal investigation months after the shooting. But Thursday’s announcement by the new prosecutor, Wesley Bell, likely marks the end of the legal saga in a case that started the global rise of the Black Lives Matter movement, which has led to some major shifts in policing in America and forced a renewed conversation about racism.

“Can we prove beyond a reasonable doubt that a crime occurred?” Mr. Bell said at a news conference. “The answer to that is no.”

The killing of Mr. Brown led to intense protests in Ferguson, a suburb of St. Louis, where scenes of officers firing tear gas at upset protesters were seared into the minds of Americans. Similar demonstrations resumed this year after the police killing of Michael Floyd in Minneapolis in May.

Mr. Brown was 18 and a recent high school graduate when he got into a confrontation with Mr. Wilson on a quiet residential street in the St. Louis suburbs. A struggle at Mr. Wilson’s police vehicle turned into a pursuit on the street that ended with Mr. Wilson fatally shooting Mr. Brown. Witnesses said Mr. Brown had his hands up when he was shot — sparking outrage and a protest rallying cry — but federal and local investigators say the evidence suggested otherwise.

“Although this case represents one of the most significant moments in St. Louis’s history, the question for this office was a simple one: Could we prove beyond a reasonable doubt that when Darren Wilson shot Michael Brown he committed murder or manslaughter under Missouri law?” Mr. Bell said. “We cannot prove that he did.”

Even without a criminal prosecution, Mr. Brown’s death brought attention to police killings of Black people. It also forced many police departments to consider new reforms, like making officers wear body cameras, and other changes in the criminal justice system, like ending cash bail. An investigation by the Justice Department found that law enforcement in Ferguson and the surrounding communities regularly violated the rights of Black people, leading to changes in laws, and how courts and cities operate.

Mr. Bell himself is a product of the change brought on by Mr. Brown’s death. Activists heavily criticized the longtime prosecutor, Robert McCulloch, who led the grand jury process that resulted in no indictment. Mr. Bell, who is Black, unseated Mr. McCulloch in the Democratic primary two years ago as part of a nationwide wave of reform-minded people of color winning prosecutor races. Ferguson elected its first Black mayor, Ella Jones, this year.

At weeks of protests that rapidly extended from Minneapolis to cities and small towns across the country after Mr. Floyd was killed, Mr. Brown’s name — among those of other Black people killed by the police — was frequently shouted by protesters or etched onto cardboard signs.

The Black Lives Matter protests that followed the killing of Mr. Floyd may be the largest protest movement in United States history, with recent polls indicating that between 15 million and 26 million people took part in the demonstrations. Four officers have been charged in Mr. Floyd’s death, including one, Derek Chauvin, who has been charged with murder after a video showed his knee lodged against Mr. Floyd’s neck for more than eight minutes.