Put the cans back in the fridge. Take down the Kylian Mbappé poster from your bedroom wall. Quietly delete the Saudi Arabia flag from your Twitter handle. Yes, the end is nigh for one of English football’s most unlikely summer romances. Boy meets sovereign wealth fund. Boy loses sovereign wealth fund over television piracy issues. Boy pockets £17m deposit. A tale as old as time itself.

Of course, you don’t need to be a professional satirist to spot the heavy irony in Saudi Arabia’s bid for Newcastle United being thwarted by due legal process, something so strikingly optional in its own justice system. Having spent the past few months bullishly briefing that a deal was imminent, unfairly raising the hopes of millions of fans desperate to see the back of the hated Mike Ashley, the country’s Public Investment Fund – along with Amanda Staveley’s PCP Capital Partners and the billionaire Reuben brothers – have been forced into a hasty retreat. You hate to see it.

The first thing to point out is there may be less to all this than meets the eye. Many of the world’s economies are bracing themselves for a deep and painful recession. The Covid-19 crisis has devastated Saudi Arabia’s oil revenues, driving a £22.3bn deficit in the second quarter of 2020. The International Monetary Fund estimates the economy could shrink by 6.8% this year. The country has already been forced to triple VAT and cut benefits. In this context, perhaps it has simply decided that ploughing untold fortunes into a huge, open-ended project with a worrying reliance on Jonjo Shelvey may not be the most propitious investment.

And yet for all the venom and mania unleashed by this sordid tale, from the trolling of Amnesty International, to the abuse sent by some Newcastle fans to the fiancee of the late Jamal Khashoggi, to the sight of respected journalists turning into cheerleaders for the takeover, this is no time for triumphalism. The Saudis have been pushed back for now. But sport – and politics – teaches us that there is invariably someone just as bad around the corner.

In the medium term, it may well be the Saudis themselves. This is not, you suspect, the sort of regime that issues a polite thank-you note and then turns its attentions elsewhere. Once the weather has turned, once the furore has died down, once oil revenues have bounced back, they could yet return: perhaps in a different guise, perhaps outside the Premier League. A member of the Saudi royal family owns Sheffield United, having first bought a stake when they were 17th in League One and – frankly – nobody was really looking. A former minister for sport owns Almería in the Spanish second division.

For now, though, the deal appeals to have snagged on Saudi Arabia’s apparent pirating of Premier League games via its beoutQ channel. Perhaps there’s something vaguely depressing about the fact that in the eyes of the Premier League this seems to be more of a red flag than any of the regime’s flagrant human rights abuses. Bump off whoever you want. Treat women however you see fit. But mess with our broadcast contracts and there’ll be trouble. 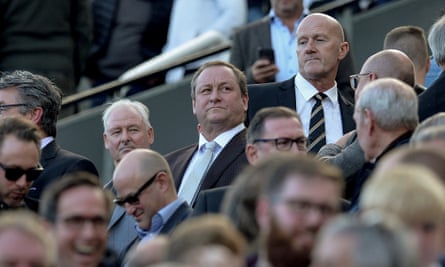 Mike Ashley (centre) has been looking to sell the club for years and this is just latest in a long list of failed deals. Photograph: Mark Runnacles/Getty Images

What of the fans, who we are often told with a breathtaking absence of perspective are the real victims in all this? To be a Newcastle fan for most of the past few decades has been to drink liberally from the keg of suffering: not the torture and imprisonment kind, of course, more the occasional relegation to the Championship. And yet, all they really want is what any devoted fan demands. A club to be proud of: a destination, rather than a departure lounge. An owner with ambition, respect, openness, a feel for tradition. These are traits Ashley has never remotely threatened to possess.

But it’s not a binary choice, and never has been. Newcastle fans frequently point to Abu Dhabi investment in Manchester City, or existing Saudi ties to Manchester United or large swathes of the British economy, and argue their club is being held uniquely responsible for a problem they did not create. But just because someone is running around the neighbourhood with a grenade launcher doesn’t mean you arm everyone else with a grenade launcher. Just because Saudi investment is already deeply embedded in English football doesn’t mean you have to throw open the doors and let them help themselves.

There are potential owners out there who aren’t tied to abhorrent regimes, who don’t represent states with a history of harbouring and funding global terrorism. Perhaps some day one of them will buy Newcastle, relieve the repugnant Ashley of his unwanted ward and provide the investment of time, energy and love that a club of its tradition has always deserved. Only then, you suspect, will Newcastle fans realise how big a bullet they’ve just dodged.