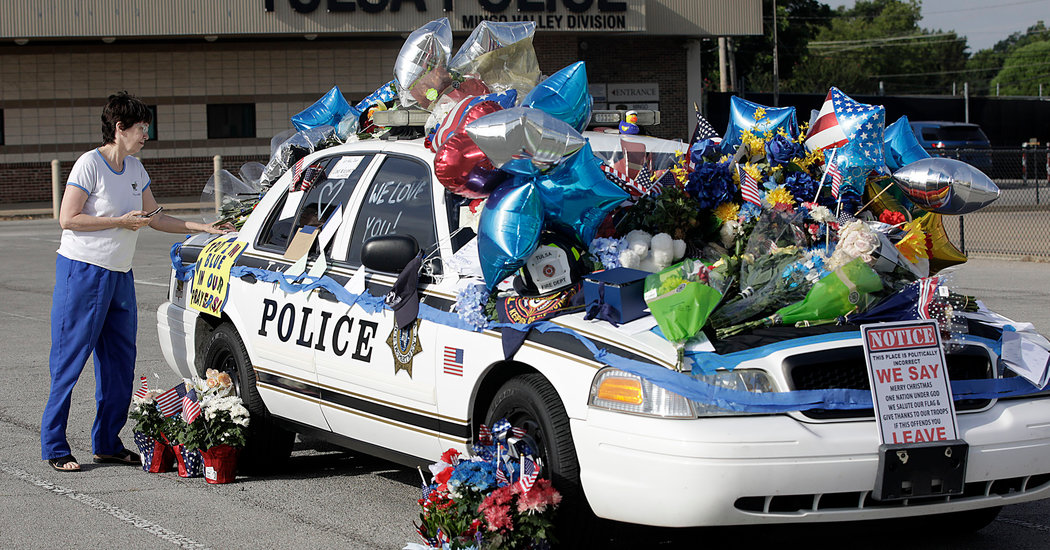 A police sergeant who was shot during a traffic stop in Tulsa, Okla., early Monday morning died of his injuries on Tuesday, and another officer who was critically wounded remained hospitalized, the authorities said.

The sergeant, Craig Johnson, a 15-year veteran of the Tulsa Police Department, underwent emergency surgery for multiple gunshot wounds but did not survive, the city’s police chief, Wendell Franklin, said at a news conference on Tuesday afternoon. Several police officers and the city’s mayor flanked the chief, who stood in front a patrol car that had been turned into a makeshift memorial.

Chief Franklin said that the family of Sergeant Johnson, 45, who was married with two young sons, had planned to donate his organs and had been presented with a Purple Heart medal.

The killing of Sergeant Johnson followed a tumultuous period for law enforcement officers in Tulsa, which was the site of a June 20 rally for President Trump that drew protests. Many of the demonstrators protested the killing of George Floyd and police misconduct.

“These are officers who have chosen to be in law enforcement at a historically challenging time,” G.T. Bynum, Tulsa’s mayor, said during a news conference on Monday.

Sergeant Johnson was backing up another officer who had pulled over a Chevrolet Cobalt with expired paper license tags at about 3:25 a.m. Monday when things turned violent, the authorities said.

The driver, whom police identified as David Anthony Ware, 33, refused to get out of his car when the officers told him that they were going to have it towed, Chief Franklin said at the news conference on Monday.

The condition of the other officer, Aurash Zarkeshan, 26, who had just finished training in May and had been on patrol for about six weeks, was described on Monday as critical. The Tulsa Fraternal Order of Police referred questions on Tuesday about Officer Zarkeshan’s condition to the Police Department, which did not give an update.

Armin Zarkeshan, Officer Zarkeshan’s brother, said in a brief interview on Tuesday night that the officer was “doing better.”

Mr. Ware was arrested later on Monday and was charged with first-degree murder, shooting with intent to kill and unlawful possession of a firearm by a felon, the authorities said.

A second person, whom police identified as Matthew Hall, picked up Mr. Ware in another vehicle after the shooting and helped him flee, the authorities said.

It was not immediately clear if Mr. Ware and Mr. Hall had lawyers, and none were listed on court records.

Senator James Lankford, Republican of Oklahoma, wrote on Twitter that he and his wife, Cindy, were praying for Sgt. Johnson’s family “and the entire Tulsa community as we grieve the loss of one of our own.”

“The news is heartbreaking to the entire nation,” he wrote. “We pray his family knows that Oklahomans everywhere mourn with them and pray for them today.”

Gov. Kevin Stitt of Oklahoma, also on Twitter, said that he hoped that Sergeant Johnson would be “forever remembered for the heroism, courage and bravery he displayed while protecting Tulsa for 15 years.”