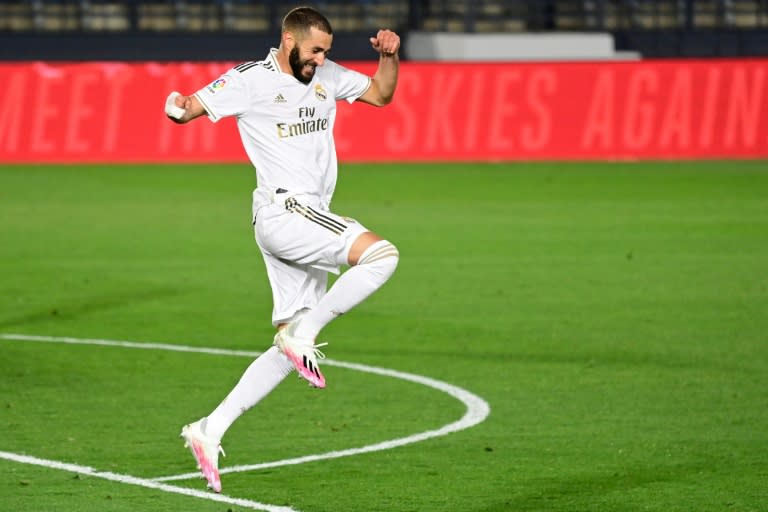 Madrid (AFP) – Eden Hazard and Luis Suarez were both circled as potential deciders of La Liga’s title race when the season resumed but few looked at Karim Benzema.

Lionel Messi was expected to be formidable again and there was excitement even around Gareth Bale following reports from Valdebebas he was the fittest Real Madrid player to return from lockdown.

Hazard and Suarez were returning from surgery too, handed an unexpected last shot at turning the season. If either came back at their best, it would surely tip the balance.

But Benzema was overlooked, despite 19 goals in 36 games before the three-month suspension, making him La Liga’s top scorer among all players not named Messi.

In Madrid’s first game back, he set up the opening goal for Toni Kroos and created two more, even if Hazard’s generosity meant the assists were not officially his. Against Valencia he then scored twice, the second a sensational volley after a feathered touch past Hugo Guillamon.

It will probably be goal of the season and it was his 243rd goal for Real Madrid, moving him into fifth, above Ferenc Puskas, on the club’s all-time list.

“When he scores like that I’m happy because he shuts people up a bit,” said Zinedine Zidane.

After a comfortable win over Real Mallorca, Benzema banged in what turned out to be the winner against Real Sociedad and then he brought the finesse to Espanyol, where a brilliant backheel through the legs of Bernardo Espinosa teed up Casemiro.

Five superb performances from Benzema have helped thrust Real from two points behind Barcelona to a point in front, with a game in hand.

When the 17-year-old Benzema signed his first professional contract at Lyon, he had to make a speech to the squad, as was tradition for new players joining the first team.

He was shy and awkward but as some of those in front of him began to snigger, he found his voice. “You laugh,” he said. “But if I’m here it because I’m here to take your place.”

Some took against the youngster’s bravado and in the years since, Benzema has been perceived as arrogant, aloof, flash, a troublemaker, especially in France.

Perhaps he has carried with him the allegations, still due to go to a criminal trial, that he was involved in a blackmailing plot in 2015, which have already cost him winning the World Cup and his international career.

As a club player he also spent the best part of a decade playing second fiddle to Cristiano Ronaldo, running the channels and pulling away defenders, all in service to the Portuguese.

It meant his contributions rarely made the highlights reels or momentary clips on social media while his statistics, albeit respectable, never put him in the conversation about the most talented strikers in the world.

Yet without Ronaldo last season, Benzema registered the second best goal tally of his Madrid career and this term he has his best in four years already, with three weeks still to go.

Within minutes of his backheel to Casemiro, fans were comparing it to the backheel Guti laid on for him to finish in 2010. Once the support act, Benzema is now playing the lead.

Hazard has helped, their combination blossoming during the brief periods when the Belgian has been fit this season.

Hazard could yet take the limelight away from Benzema again but the evidence so far suggests it will be more a partnership of equals, assuming Hazard ever finds his best in Spain.

For now, this is Benzema’s Real Madrid and if they go on to win a second title in eight years there will be a compelling argument to say it was his La Liga too.