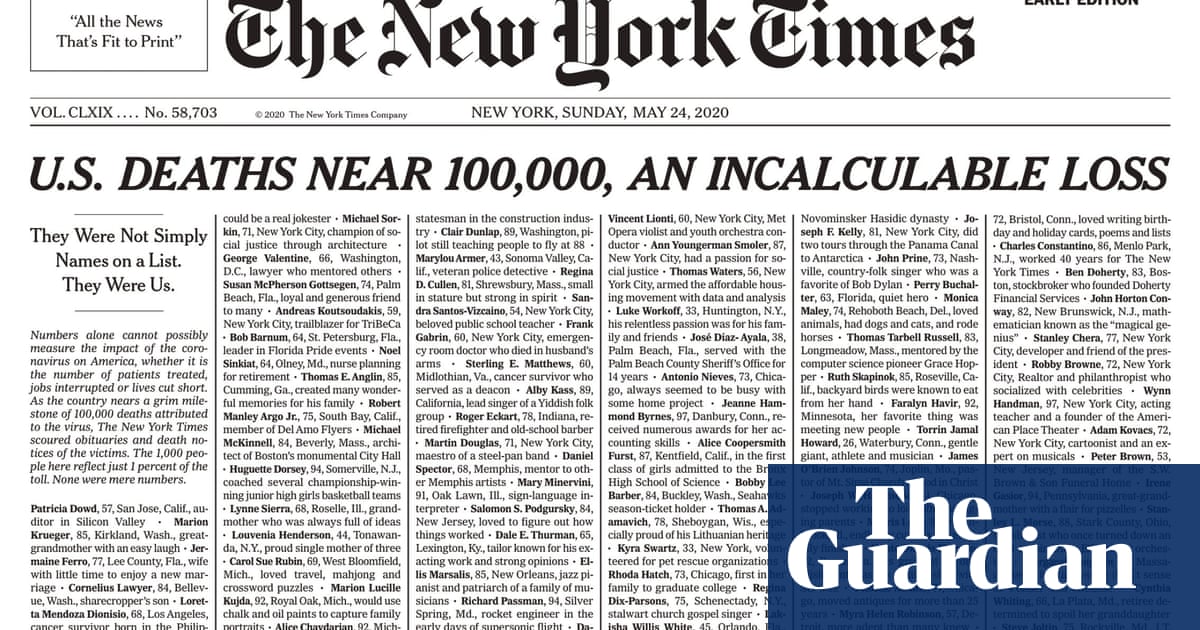 As the US approaches the grim milestone of 100,000 coronavirus deaths, the New York Times has filled the entire front page of Sunday’s paper with the death notices of victims from across the country.

In a decision the paper said was intended to convey the vastness and variety of the tragedy, the front page is a simple list of names and personal details taken from obituaries around the US.

The headline is “US deaths near 100,000, an incalculable loss”, with a sub-heading that reads: “They were not simply names on a list. They were us.”

The entire list, which continues inside, numbers nearly 1,000 names – a fraction of the total loss of life in the US during the outbreak so far.

The US death toll stands at more than 97,000, according to the Johns Hopkins University tracker, by far the highest in the world, and the Times said it had been considering how to mark expected milestone of 100,000 deaths.

In an article for Times Insider, assistant graphics editor Simone Landon explained the treatment was a way of personalising the tragedy as readers and staff developed data fatigue from the constant reporting of the pandemic.

Landon led a team of researchers in searching obituaries in hundreds of US newspapers that listed Covid-19 as the cause of death and extracting names and key personal details “that depicted the uniqueness of each life lost”, such as: “Alan Lund, 81, Washington, conductor with ‘the most amazing ear”.

America begins to unlock for summer – but is it inviting a disastrous second wave?

Tom Bodkin, its chief creative officer, said the all-text treatment referenced early newspaper designs, but that he could not remember another front page without an image in his 40 years at the paper. “This is certainly a first in modern times,” Bodkin said.

The Times tweeted an image of the front page on Saturday afternoon and within hours had 61,000 retweets and more than 116,00 likes.

Monday in the US is Memorial Day, the traditional start of the American summer, and some experts fear that the return of warmer weather combined with a loosening of lockdowns around the country could trigger a deadly second wave of the coronavirus.

On Friday, White House coronavirus taskforce member Dr Anthony Fauci said new localised outbreaks were “inevitable” as mitigation measures were relaxed. He said a full-blown second wave could be avoided if the holy grail of containment measures – testing, quarantine and contact tracing – continued to be adhered to.

Fauci said he was hopeful that the US would be ready, though a recent study by Harvard University found that only nine states were conducting, or near to conducting, the minimum recommended testing. Hours after Fauci spoke, Donald Trump ignored health guidance and ordered houses of worship to open for in-person services at the weekend.