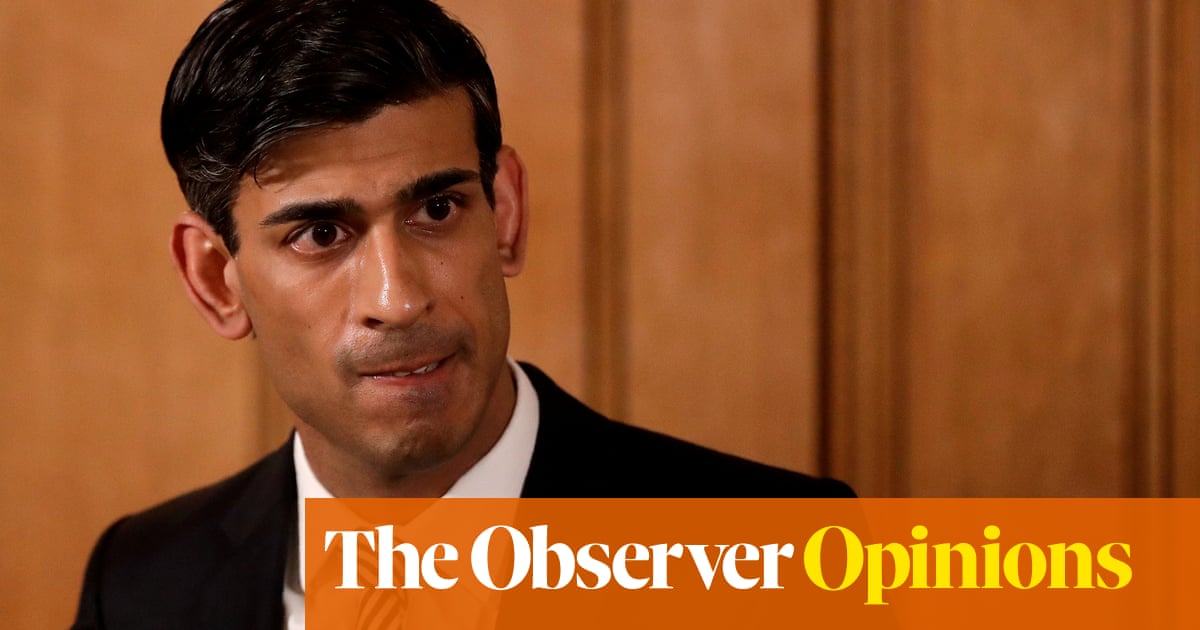 A consensus has emerged that the only route out of the lockdown is with government cash. From across the political divide there is support, offered reluctantly in some quarters, for the idea that only state-funded agencies will have the financial muscle and the will to put the wheels of the economy in motion once the pandemic has receded.

Private-sector companies emerging from the deep freeze will need to tiptoe before they run, hence the Royal Society of Arts and Manufacturing’s proposal of an initial three-day week. Theirs must be a slow re-emergence, observing physical distancing.

This broad level of agreement, even from ardent free-market thinktanks, should give the Treasury the level of political cover it craves as public debts spiral and beloved texts of conventional economic thinking are tossed in the bin.

This time is different. A pandemic is different. Unlike a financial crash, it shuts down all parts of the economy, not just the banks, and turns millions of consumers into nervous spenders, not sure if their job will survive into next year. And unlike in a financial crash, the moral element is missing. There are no bankers to blame, or spendthrift households who should have known better than to borrow six times their income.

Given this consensus, it is curious that Rishi Sunak is shrinking from the task of using the state’s resources for the next phase of the rescue programme, having spent so much time and money, and gained so much kudos, in the first stage.

Panic appears to have gripped the Treasury following a series of forecasts that estimate the cost to the exchequer at more than £300bn this financial year – a sum that will push the overall debt-to-GDP figure from just north of 80% to nearer 120%.

But ministers shouldn’t be alarmed by simple percentages. They should focus on the cost of servicing the public debt, which is falling by the day. Last week the Treasury borrowed an extra £3.8bn from international investors in the form of a three-year bond. Such is the panic in global markets at the moment, the interest rate was negative, so lenders expect to get slightly less back in three years when the bond matures.

If the government can borrow at next-to-zero interest, financing the debt is not going to be difficult. And this situation is likely to persist for a long time. And when the cost increases, it will only be because growth has accelerated, in which case the government will have higher tax revenues and can afford higher debt payments.

That’s not Sunak’s view. He is prey, according to those who deal with him, to a Treasury cautiousness dating back more than 100 years. There is a sense, and it is no more than that, of the UK nearing a borrowing limit beyond which its public finances become unstable.

This is a Tory government, so the best Sunak can do is still worth something

No one who talks about the limit can say when it will be reached. Former Treasury permanent secretary Nick Macpherson has hounded his erstwhile colleagues with tweets pointing out how weak they are in the face of demands for bailouts.

When the prime minister backed down after previously blocking a campaign to lift the immigration surcharge for NHS staff, Macpherson took the opportunity to berate Sunak on Twitter, saying this government has yet to hold the line on any “tough” spending decision since coming to power.

Macpherson has been joined by George Osborne, who you would think was disqualified from discussing the subject after 10 years of pushing through austerity cuts, especially to public health budgets, that left Britain woefully unprepared for a pandemic.

Osborne is kinder to the current chancellor but also breaks with the consensus to warn that the money will need to be paid back.

The US won’t be thinking about repaying its debts, even though they are likely to soar above 130% of GDP. Japan won’t be tackling its 260% debt-to-GDP ratio and the eurozone countries will in aggregate see their debts climb towards 100% without any means to get them down again.

There is no appetite in any developed country for further austerity. And nor should there be. Far from austerity, policies to spur growth with further support from government are what is needed. That’s not to say the crisis management of the economy cannot include a redrawing of taxes that shifts the balance from income to wealth and tackles longstanding inequalities.

But this is a Tory government, so the best Sunak can do is still worth something. And that is to confront his officials with outside thinking to justify state subsidies for business, not just during the lockdown, but to promote growth next year – and the year after.