he taste of bitter greens, swirled into the holy trinity of garlic, olive oil and chilli pepper to make cicoria ripassata alla Romano, is one of those simple yet delicious dishes we all need right now. There’s another, lighter version that calls for lemon juice and salt instead of garlic and chilli. And I go weak at the knees for the Pugliese take, where the greens are comforted in a puree of broad beans and garlic. Better yet, these are some of the easiest of greens to grow: simply open the seed packet and scatter.

These are all classic cucina povera – peasant food – dishes, in this case using chicory leaves, which originally would have been foraged from meadows and field margins. The Italians have made a fine art of this vegetable family – think of all those radicchios and endives.

Chicory was once cheap to buy, but now tends to be rather expensive and specialist, which is another reason to grow it. Unlike the radicchios and endives that need blanching or frosts to make them palatable, and are thus relegated to growing from the end of summer onwards, chicory is best grown now for summer pickings. I promise the slugs will leave them alone. 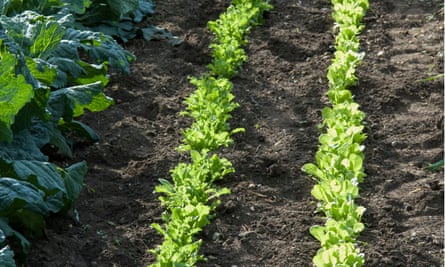 There is the original wild field chicory, Cicoria selvatica da campo, with its sprawling, open-hearted habit and spindly leaves, the very youngest of which are delicious raw with a bagna càuda (a hot dish made from garlic and anchovies). Then there are the more cultivated forms, with longer, more upright leaves, such as Cicoria Catalogna Pugliese, or the smooth form, A Foglia Stretta del Veneto. And not forgetting the wider-leaved varieties, such as Cicoria taglio Bionda a foglie larghe, which has pale green, almost lettuce-like leaves that can be eaten raw when young, and if grown in a wide drill can be treated as cut-and-come-again – although by the third or fourth cut they will be too tough for anything but cooking.

The best place to get any of these is Franchi Seeds, which is still delivering to customers and whose generous seed packages translate to mountains of greens.

Chicory does best in a little shade, with the roots kept cool and damp. It is a useful crop between taller vegetables, perhaps kale or sweetcorn, and works well in polyculture mixes with radishes, dwarf peas and parsley. If they are grown in too much sun, particularly if they then dry out, the bitterness can reach unpalatable heights.

Sow into wide drills, with seed liberally scattered along – thinly, so that mature plants are around 15-20cm apart.