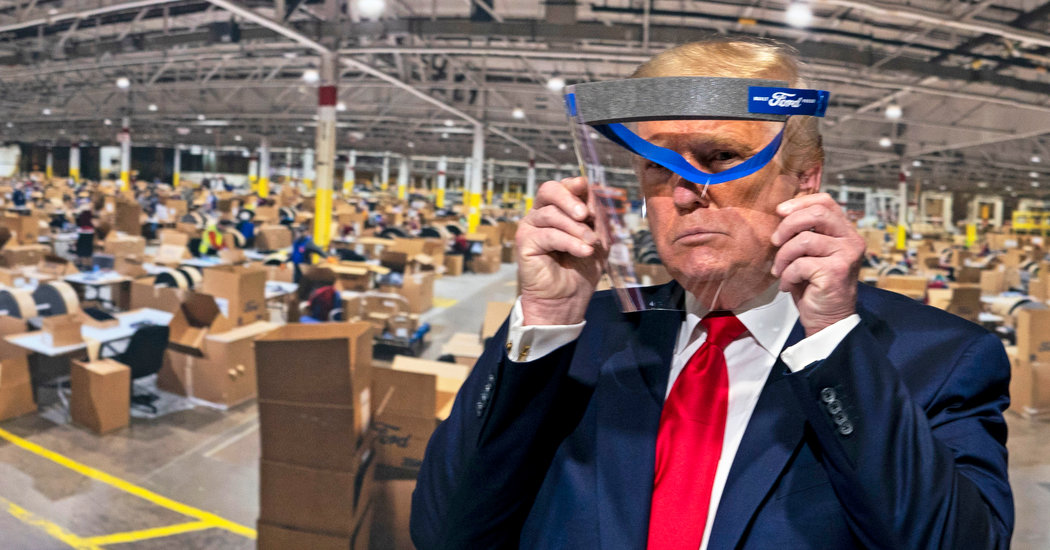 WASHINGTON — My corona dreams are so crazy and vibrant, with star turns by politicians, celebrities, zombies and my late mother, that sometimes as I wake, I groggily think the virus that devoured the globe has to be a dystopian vision.

Then, still sliding into consciousness, I muse that Donald Trump lumbering around the White House must have been a dream, too. How is it possible that this man is actually president?

But the Trump carnival of dread, with its twin fixations on masks and unmasking, is all too real.

On Thursday, as China played King Kong with Hong Kong; as unemployment rose to 38.6 million; as broken dams unleashed a flood in Central Michigan; as the president continued to stubbornly and recklessly claim he was taking hydroxychloroquine, causing sales to soar; as the news sunk in that if the U.S. had acted even a week sooner on social distancing that 36,000 people might still be alive; as Senate Republicans finally cemented themselves to Trump and his crazy schemes; as Trump stuck to his threat of withholding federal funds to Michigan and Nevada if those states enabled voters to vote; as a partisan know-nothing was put in charge of all our intelligence; as Trump pulled out of another major arms control pact; as Mike Pompeo basked in getting Trump to fire another inspector general (this one looking into a backdoor deal to sell arms to Saudi Arabia and brazen grifting by the Pompeos), the cliffhanger president made sure the focus was on just one little thing: Would he or wouldn’t he wear a mask as he toured the Ford plant in Ypsilanti?

After donning it for a few private moments with Ford executives, Trump removed the mask for the public part of the tour, saying he “didn’t want to give the press the pleasure of seeing it.”

While you know Barack Obama would have been all about the mask, showing the nation the proper example, Trump is afraid his followers will think he’s a wimp if he wears it, that he’s conceding the danger of a pandemic many in MAGA-land think is exaggerated or some sort of hoax.

The mask should be a medical signal, not a political one. But Trump rejects the mask because of a misbegotten image of masculinity and power. In denying the mask, he denies reality, science and the fact that the country is in a crouch. Trump has proved that people wearing a mask can present more truth than people not wearing a mask.

His latest con, something that he stupidly refers to as “Obamagate,” a scandal about unmasking, is also misbegotten. You can’t create a scandal about Obama out of nothing just because you hate the fact that he went by the book while you dwell in a murky world of transgressions, that he glides while you lurch.

Even as Trump tries to paint Joe Biden as gaga, he is doing something truly gaga: He is running the government that is responding to the worst pandemic in a century at the same time he is the leader of the resistance to his own government, urging people and states to open up whenever they see fit, recommending Clorox injections, stifling Dr. Fauci, refusing to wear the mask.

The fact is that Donald Trump has been wearing a mask for a long time, like Eleanor Rigby “wearing the face that she keeps in a jar by the door.” He studied larger-than-life titans like George Steinbrenner and Lee Iacocca and invented a swaggering character called Donald Trump with a career marked by evasions, deceptions and disguises.

The young builder was intent, as T.S. Eliot wrote, to take the time “to prepare a face to meet the faces that you meet.” Early on, Donald locked in his costume for the masquerade, the look of a C.E.O. in the ’80s. His body armor was a dark suit, white shirt and monochromatic silk tie. His hair was a blond helmet, his war paint was orange.

“He is the most vaudevillian performance artist who ever inhabited the White House,” says his biographer Tim O’Brien. “He has a consuming desire to always be center stage, yet he never wants to reveal who he really is. He masks his finances, his taxes, his friendships, his ongoing family conflicts of interest, his ignorance and his inadequacies. He’s constantly making up areas of expertise he doesn’t have.

“He doesn’t read the Bible and he doesn’t live as a Christian and love thy neighbor. But he is demanding that the churches be reopened because his evangelical base will love that. Everything he’s doing right now is to stave off a loss in November.”

Just as Obama admitted at the end of his presidency that he had not always been “attentive enough” to the parts of the job he did not care for, the theatrics, the “simplistic” displays of feelings and emotions designed “to satisfy the cable news hype-fest,” Trump’s presidency is the reductio ad absurdum of all that. It is all theatrics, all performance, all form with no content. His script is the only truth.

Those of us who have donned protective masks to fight the virus have taken off our professional masks — makeup, fashion, artifice. Now we see celebrities and journalists in their own habitats without hair and makeup, and that has made them seem more fully human.

Humanity is showing through — everywhere except, ironically, with the unmasked Trump.

As we saw with Joe Biden’s latest contretemps, telling Charlamagne Tha God, “If you have a problem figuring out whether you’re for me or Trump, then you ain’t black,” Biden has his flaws. God love him.