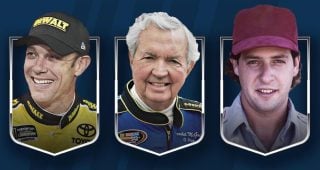 Three NASCAR legends will be inducted into the sport’s Hall of Fame Friday evening at the NASCAR Hall of Fame in Charlotte, North Carolina. Among the remarkable list of nominees for the 2023 class, drivers Matt Kenseth and Hershel McGriff will be enshrined alongside crew chief Kirk Shelmerdine.

Here is everything you need to know about the drivers and 2023 ceremony, including broadcast and ticket information:

• Matt Kenseth: Kenseth spent over 20 seasons racing in the Cup Series, highlighted by his 2003 championship. The 2000 Rookie of the Year amassed 39 wins, including two in the Daytona 500, en route to a highly successful premier series career. Kenseth also raced in the Xfinity Series, collecting 29 victories and ranking eighth on the all-time chart. | More on Kenseth

• Hershel McGriff: McGriff burst onto the premier series scene at age 22 and wrapped up his career with four wins in 87 starts. He also shined in the Pro Series West, now known as the ARCA Menards Series West, tallying over 30 wins in his career. McGriff was also named to the “NASCAR’s 50 Greatest Drivers” list released in 1998. | More on McGriff

• Kirk Shelmerdine: Shelmerdine spent 1977-1992 as a crew chief in the premier series, first reaching the sport’s pinnacle at just 25 years old. Throughout that time, he captured four championships (1986, 1987, 1990 and 1991) with Hall of Famer Dale Earnhardt. Before retiring from atop the pit box to pursue a career as a driver, Shelmerdine racked up 46 wins and 15 pole awards. | More on Shelmerdine

Note: Former NASCAR President and current Vice Chairman Mike Helton will also be honored as the 2023 recipient of the Landmark Award for Outstanding Contributions to NASCAR. | More on Helton

EVENT SCHEDULE (All times are ET)

Tickets are currently on sale for friends and fans to attend Friday evening’s induction ceremony. The NASCAR Hall of Fame induction ceremony will air live on Peacock at 8 p.m. ET and will simultaneously be broadcast on the Motor Racing Network (MRN). For more information on Peacock’s streaming service, click here. For more information on MRN and Friday evening’s radio broadcast, click here.