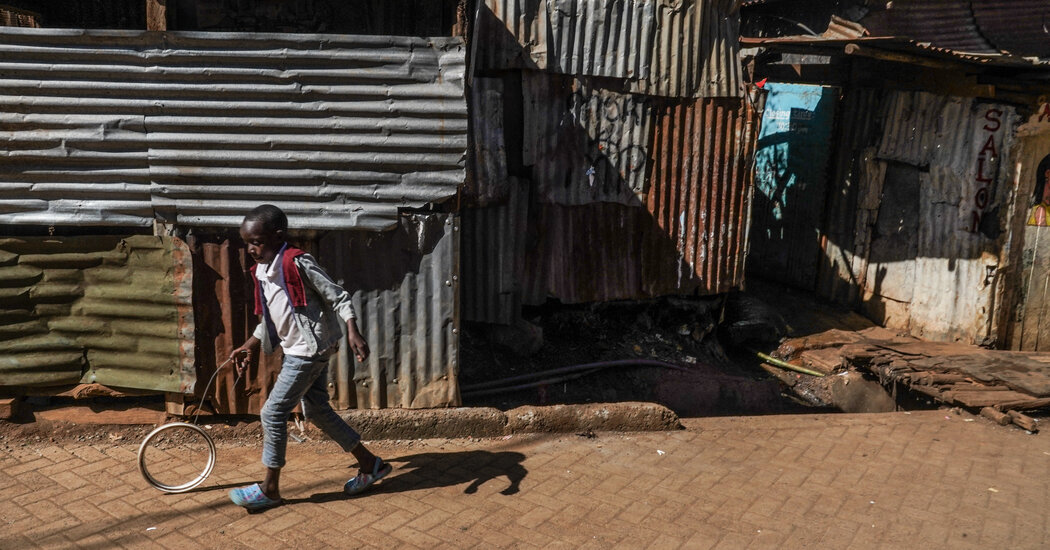 NAIROBI, Kenya — Here in the Kibera slum, life sometimes seems a free-for-all. Residents steal electricity by tapping into overhead lines, children walk barefoot through alleys trickling with sewage, and people occasionally must dodge “flying toilets” — plastic bags that residents use as toilets and then dispose of by hurling them in one direction or another.

Yet this is an uplifting slum. Against all odds, Kibera is also a place of hope, and it offers a lesson in bottom-up development that the world should learn from.

The tale begins with a boy whose single mom — 15 years old when she gave birth — named him Kennedy, because she wanted him to be like an American president she had heard of. Little Kennedy Odede didn’t attend formal school, and at the age of 10 he ran away from a violent stepfather and ended up sleeping on the streets.

Kennedy taught himself to read and was inspired by a biography of Nelson Mandela that a researcher shared with him. Kennedy, ebullient and charismatic, then formed a Kibera self-help association called Shining Hope for Communities, better known as SHOFCO.

An American student from Wesleyan University, Jessica Posner, volunteered at SHOFCO and then persuaded Wesleyan to accept Kennedy as a full scholarship student, even though he had never even gone through a real elementary school. Jessica and Kennedy fell in love and married when he graduated.

One of SHOFCO’s early projects was Kibera School for Girls, which recruited some of the most impoverished girls in the slum. Their parents were sometimes illiterate, and one-fifth of those little girls had been sexually assaulted. Yet the girls knew that they were special, and with intensive tutoring they turned into star students, outperforming children at expensive Kenyan private schools.

I am an old friend of Kennedy and have been following his work since my first visit a dozen years ago. One girl I met then, when she was a second grader, is now studying at Columbia University. Her former classmates are studying at four other American universities as well as at Kenyan universities.

Let’s just acknowledge that development is hard, particularly in urban slums that are growing fast around the world. Billions of dollars are poured into the poorest countries, and in Haiti and South Sudan one sees fleets of expensive white S.U.V.s driven by aid organizations; what’s missing is long-term economic development. International aid keeps children alive, which is no small feat. But it has had less success in transforming troubled places.

That’s where SHOFCO is intriguing as an alternative model. Its grass-roots empowerment approach has similarities with BRAC, a Bangladesh-based development organization that I consider one of the most effective aid groups in the world, and with Fonkoze, a similar homegrown nonprofit in Haiti.

“Development has been part of imperialism — you know better than anybody else because you’re from America or Europe,” Kennedy told me. He thinks international aid sometimes is ineffective partly because it feels imposed by the outside.

It succeeds, I think, because it exemplifies a partnership: local leadership paired with a reliance on the best international practices. SHOFCO, for example, adopted deworming and cervical cancer prevention programs that reflect the best international knowledge, and these were accepted by local people partly because they trusted Kennedy.

I had wondered how scalable SHOFCO was: Did it depend on Kennedy’s charisma, making it hard to replicate in other slums? No, the model has actually scaled smoothly across the country — and other Kenyan slums turned out to have their own untapped Kennedys.

I often write about poverty, and while the subject can be depressing at times, I also regularly find reason to be inspired.

One woman I met on this visit to Kibera is Lauren Odhiambo, 23, a SHOFCO member whose dad died when she was young. She shares a two-room shanty with six family members and occasional rats. The home has no kitchen or running water, and evening requires some planning: The neighborhood toilet is locked from 10 p.m. to 6 a.m.

Her mom earns $70 a month washing other people’s clothes. But Lauren joined SHOFCO and took a computer skills class that led to a job that pays $250 a month. Lauren has used that income to work her way through the University of Nairobi, and this year she will become the first person in her family with a college degree. After graduation, she expects to find a job paying $400 a month.

This wouldn’t have happened without SHOFCO, she said, and I asked her why, expecting her to talk about the computer skills she learned. Instead, she made a broader point: The program taught her that slum dwellers are as good as anybody else.

“I gained not just skills,” she said. “I gained confidence.” As for the ongoing challenges she sees around her in Kibera, she added, “It’s on us to change it.”

Kibera still needs sewers, schools and decent roads, but Lauren’s success is a reminder of what a grass-roots organization can accomplish against all odds in even the grittiest slum. That fills me with hope. Shining hope.