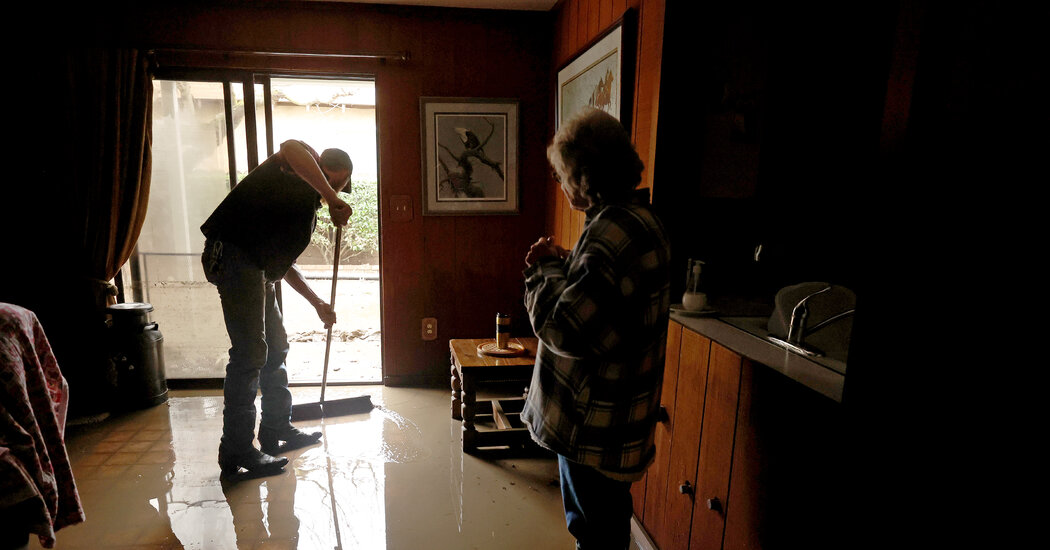 SACRAMENTO — The rains eased in California on Wednesday, offering the state a brief reprieve after nearly two weeks of downpours — and a chance to recover and prepare before another round of storms expected over the weekend.

A series of atmospheric rivers, channels of battering rains, led to flash floods and mudslides across the state. The storms had killed 18 people as of Wednesday, state officials said. More than 4.5 million people, mostly in the central and northern parts of the state, were still under flood watches early Wednesday as swollen rivers and creeks continued to spill over.

More bands of rain were brewing over the Pacific Ocean. A new wave of atmospheric rivers is expected to arrive starting on Friday.

Parts of California and the Pacific Northwest could expect rainfall to remain in the forecast into early next week, the Weather Prediction Center of the National Weather Service said on Wednesday, although it should be less intense than the recent storms.

The break in the weather sent cleanup crews scrambling throughout California’s capital city of Sacramento, restoring power and clearing waterlogged intersections. The morning air buzzed with the sounds of leaf blowers and chain saws.

The intermission helped state crews make it into the most affected areas, said Brian Ferguson, a spokesman for the Governor’s Office of Emergency Services.

But he added that officials had been unnerved by what they found: Many areas, particularly in Central California, are at serious risk of landslides, flooding and debris flows. “They just have so much water — on the ground, in the soil and in the rivers and creeks — that the new storms approaching, even if they’re not as powerful, could be even more devastating,” he said.

In Merced, in Central California, the rains have begun to abate after hundreds of people were evacuated from their homes because of flooding this week. The city put out a call for volunteers to help people in need, said Jennifer Flachman, the city’s public information officer; by Wednesday, hundreds of residents had offered aid and donations.

“We have a couple of days to reassess and get out there and put in additional sandbags and muscle walls,” Ms. Flachman said.

After days of constant chaos, the calls for urgent rescue were slowing down by Wednesday afternoon, said Scott Safechuck, a spokesman for the Santa Barbara County Fire Department.

“The rain stops and the water starts to recede, and we can see what damage is out there,” he said, adding that officials were now working to clean debris and clear roadways before the next band of rain.

In Southern California, blue skies and a bright day offered the clearest view yet of damage around the region, much of which occurred overnight.

In the Studio City neighborhood of Los Angeles, the beeping of loaders and the acrid smell of tires against the pavement punctuated an otherwise still and sunny morning. Public works crews arrived around 6 a.m. Wednesday to shovel mud out from under the cars that had been mired along Fredonia Drive, their boots slipping and squelching in the thick sludge that still stood a few feet high in some areas.

“We’re trying to do the best we can,” said Marcos Andrade, 49, adding that it was not clear how long it might take to finish freeing and towing the last eight cars. Mr. Andrade said the crews would try to push on, but that once night fell, the hillside area would be too dangerous.

Much of the land across the state is still sopping, and thousands of trees have been knocked to the ground — a product of downpours entering the soil and making it easier for strong winds to topple everything from fresh saplings to a 275-year-old oak, crushing houses and cars, snarling traffic and claiming at least three lives, including that of a 2-year-old child.

Many of those killed by the storms had been trapped in cars on flooded roadways, and officials say the death toll could still rise. Divers on Wednesday found the body of a woman in Sonoma County whose car was trapped under as much as 10 feet of water the day before. And rescuers were still searching for Kyle Doan, a 5-year-old boy who was pulled from his mother’s arms and swept away by floodwaters in San Luis Obispo County on Monday.

The storms have also posed a danger to the more than 170,000 people who are homeless in California, more than in any other state. Outreach workers have found them in recent days huddling in underpasses and riverbeds, in parks and on beaches. Two homeless people were among those killed by fallen trees.

State transportation officials reported dozens of road closures on Wednesday morning, stretching from Siskiyou County on the state’s northern edge to Orange County in the south.

In the Chatsworth neighborhood of Los Angeles, workers in orange vests and hard hats turned their attention to a gaping sinkhole that ripped apart the road on Monday, swallowing two cars and trapping two people who were later rescued by firefighters.

The storms are yet another example of how climate change has upended life in a state that has also been ravaged by expanding seasons of wildfires and years of drought.

There is at least one silver lining to the punishing storms that have been sweeping across the Pacific and battering California: The snow they have dumped in the Sierra Nevada will do wonders for the state’s beleaguered reservoirs.

As of Tuesday, California’s mountain snowpack held more than twice the water content that would be there at this time in an average year, according to the state’s Department of Water Resources.

Another, possibly heavier, storm could strike the region next Tuesday, prediction forecasters said.

After that, some relief may be in sight. Forecasts are showing a possible change in the weather patterns for late next week that would most likely end this multiweek atmospheric river event.

“Gradually, it looks like we’ll have a pattern change that will allow the spigot to turn off,” said David Novak, the director of the Weather Prediction Center. “And that would be, of course, good news.”