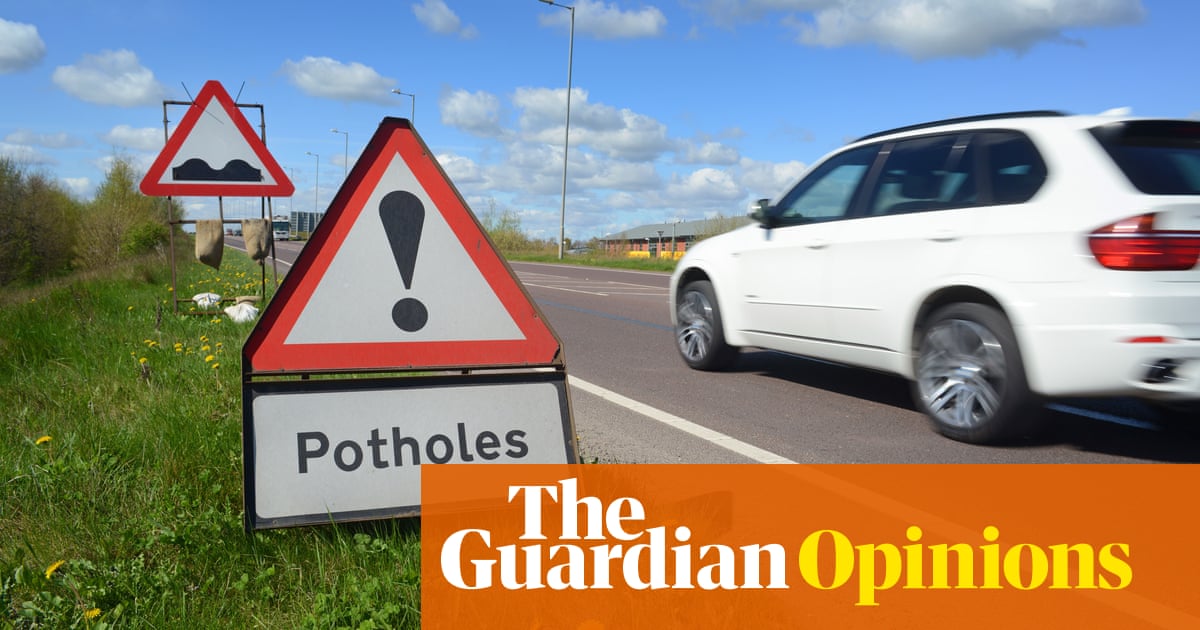 A member of parliament once told me there wasn’t a friend or foe in the House of Commons who hadn’t at some stage been pictured in a local newspaper looking anxiously at a pothole. I thought about curating a montage of all 650 such photographs and entering this work of art for the Turner Prize. But I couldn’t be bothered with doing the legwork to find them all. A quick search now yields a bizarre example of the genre, featuring a happy-looking Theresa May – wearing Converse! – on the Berkshire Live website three years ago. The headline reads: “Former PM Theresa May pictured smiling and relaxed on pothole duty in her Maidenhead constituency”. Well, thanks for taking an interest, Ms May, but may I respectfully suggest that a look of concern rather than happiness might be more appropriate here?

I know this is pothole season, what with all the entirely predictable cold and rain and whatnot, but it seems to me there are more of the things than ever before. I accept this might be because of my age. Potholes – like poor grammar, the youth of police officers and lights left on – are, after all, the kind of thing you notice more as you get older.

It might also be because I ride a motorbike and hitting one of these things at any speed could result in, you know, death. While I’m anxious not to be an old fart who parps on about the country going to the dogs, I feel very keenly that a country that can’t keep its roads in a half-decent condition has gone to the dogs.

My new year’s resolution is never to moan unless the moan is accompanied by some positive action. But with potholes this is difficult to achieve. Over the holidays, I clocked up hundreds of miles driving between London, Birmingham, Manchester, Yorkshire and South Wales. I did so much tutting at potholes that my tongue hurt. I couldn’t report each and every one – or even, to be honest, one. By the time you’ve passed the hole – or gone over it – if it hasn’t brought your journey to a halt, the moment and precise location have gone. And who’d be interested, anyway?

Finally, driving my car on the A4118 on the Gower Peninsula, I went over a real beauty and my patience snapped. It measured 70cm by 50cm and was around 6cm deep. It was big enough to accommodate a copy of that day’s Guardian. I know this because, having found a safe place to stop a couple of hundred yards further on, I got my dog out of the back – he needed a wee anyway – and stomped back to the scene of the crime with him. He looked on with solemn bafflement as I stooped, harrumphed, measured and recorded its location, using the What3words geocode system. Is it just me, or are the three words used to identify each spot often tangentially but unsettlingly apt? Here they were fight, skip and frail.

I worked myself up into a lather of virtuous indignation in anticipation of Swansea council’s lack of interest in the information I had gleaned. But I am pleased to report that its website was ready for me, with a nice form that even suggested the submission of the What3words location. I completed it with some relish, sparing the highways department no detail. My pleasure. There was even a promise to get it sorted within 48 hours. Oh yeah. A likely story. But within 24 hours it was dealt with. Fair play. But the bad news for them is that I found half a dozen more on the B4295 between Llanrhidian and Crofty. The dog and I are heading out to log them now.

Steve Fowler, editor in chief of Auto Express, tells me that the last time they checked, potholes were causing more than £700m worth of damage every year, and that getting compensation out of anyone is a devil of a business. And, as a peculiar addendum to this, Fowler also suggests that the Converse our former prime minister is sporting in the photograph might not be real ones. All to do with the number of eyelets, or something. I tell you, the country’s going to the dogs.