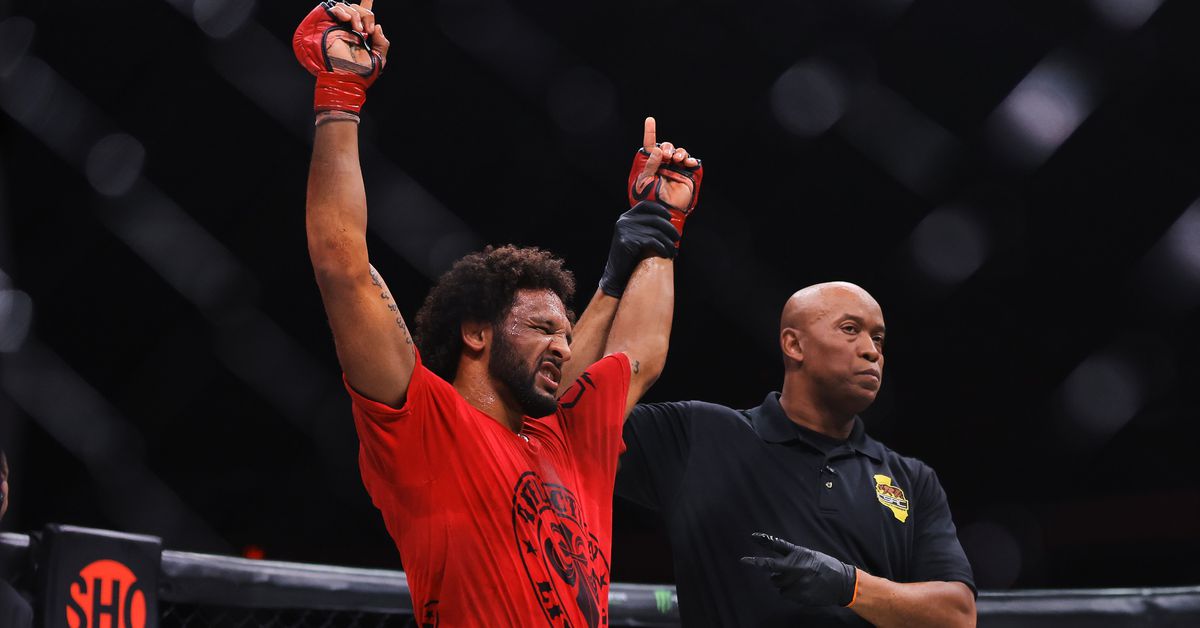 Usman Nurmagomedov’s first task as Bellator champion? Win a major tournament to hold on to his recently won title.

Kicking off the tournament at Bellator 292, Nurmagomedov defends the lightweight title against Henderson in the March 10 main event. In the co-main, Tofiq Musayev faces Alexander Shabliy in another quarterfinal matchup. MMA Fighting confirmed these bouts following an initial report from Orange County Register.

Matchups and dates are still to be determined for the other four contestants, McKee, Pitbull, Mansour Barnaoui, and Sidney Outlaw.

“As you know, we pick our tournament based on what we feel is the best division of our league and right now I think lightweight, including A.J., is going to be something that fans are going to want to watch,” Coker said.

The Bellator lightweight title will be defended throughout the tournament and the winner will receive a $1 million prize.

Coker is optimistic that the tournament will be completed in 2023, but noted that factors outside of his and the fighters’ control could take it into next year.

“These things are kind of a fluid process because injuries happen, scheduling conflicts, things like that,” Coker said. “Mostly we just want to make sure that the fighters are healthy and really ready to fight and give it 100 percent. That’s why some of these things have taken so long and then COVID hit when we had our featherweight tournament, there’s a lot of those issues.

Nurmagomedov currently holds the No. 11 position at lightweight in the MMA Fighting Global Rankings, while McKee remains tied for the No. 4 spot at featherweight.

Entering the tournament with a perfect 16-0 record, Nurmagomedov is coming off of a win over Pitbull this past November at Bellator 288 that put Bellator gold around his waist. The 24-year-old is 5-0 inside the Bellator cage.

Henderson (30-11) is currently on a two-fight win streak, with decision wins over Peter Queally and Islam Mamedov. “Smooth” made the jump from the UFC to Bellator in 2016 and has gone 7-6 for the promotion, including title fight losses at 155 and 170 pounds.

McKee (20-1) competes in his second major Bellator tournament after recently signing a new deal with the only promotion that he has called home since making his pro debut in 2015. He previously won Bellator’s Featherweight World Grand Prix by submitting then-champion Patricio Pitbull in the finals, but lost a decision in an immediate rematch at Bellator 277. Since that loss, McKee has moved up to the lightweight division where he is 2-0 with wins over Spike Carlyle and RIZIN star Roberto Satoshi.

Musayev (20-4) recently returned to the win column with a first-round knockout of Outlaw in his promotional debut at Bellator 283. He has won 16 of his past 17 fights, competing primarily for RIZIN.

Shabliy (22-3) looks to continue his winning ways as he has gone 3-0 since joining Bellator in 2021. In his most recent outing at Bellator 282, Shabliy scored a first-round knockout of former lightweight champion Brent Primus.

France’s Barnaoui (20-4) also made a successful Bellator debut in 2022 as he was tasked with headlining Bellator 287 in Milan this past October. Matched up with Adam Piccolotti, “Tarzan” needed a little more than a round and a half to score a submission victory. The former Road FC champion has won eight straight fights.

Pitbull (24-11) fights to regain the title that he dropped in his first defense to Nurmagomedov. The longtime Bellator veteran has alternated wins and losses in his past six outings and his record with the promotion sits at 15-9.

Outlaw (16-5) holds a 4-2 Bellator record with notable wins over Myles Jury and Piccolotti, though he has fallen short against the elite with losses to Musayev and current UFC star Michael Chandler.

Bellator has held several Grand Prix tournaments in the past, including an eight-man bantamweight tournament that is set to conclude soon with interim champion Raufeon Stots and Patchy Mix competing in the final.

See the Bellator Lightweight World Grand Prix field and the announced matchups below.

The following bouts are also official for Bellator 292:

Damon Martin contributed to this report.