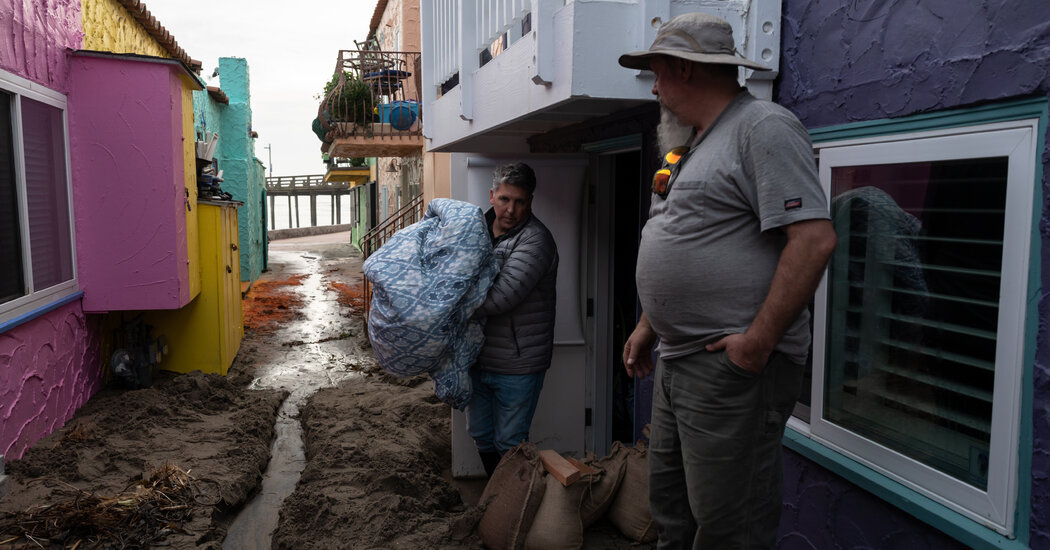 CARPINTERIA, Calif. — Thousands of residents were ordered to quickly evacuate Montecito on Monday as another major California storm threatened to unleash dangerous mudslides, five years to the day that a deadly torrent of mud and boulders rushed through neighborhoods in the Santa Barbara County enclave.

Up to a foot of rain was expected to soak the already drenched hillsides there on Monday alone, with the area at high risk of mud flows because of recent wildfires that have made soils and vegetation less stable. The 2018 mudslide killed 23 people and turned the normally pristine mansion community into a disaster area.

“We’re in the midst of a series of significant and powerful storms,” Sheriff Bill Brown of Santa Barbara County said in a briefing. “Currently, we’re experiencing a storm that is causing many problems and has the potential to cause major problems across our county, especially in the burn scar areas.”

At the Best Western Plus Carpinteria Inn, several miles southeast of Montecito, a steady stream of people clad in rain gear pulled up in SUVs packed with luggage and provisions. Some who had evacuated said they were surprised to be among those ordered to leave because their homes were not in burn scars.

The latest in a series of atmospheric rivers struck most of California on Monday, drenching the northern part of the state in the morning and then lashing the Central Coast throughout the day. Southern California, which woke up to soggy skies before a reprieve, was expecting a cascade of rain later Monday and into Tuesday.

The next round was also forecast to bring rain and some thunderstorms to Northern California on Tuesday.

Among the hardest-hit areas on Monday was Santa Cruz County, about 70 miles south of San Francisco, where more than 30,000 residents were evacuated as creeks and rivers topped their banks, threatened homes and washed away at least one bridge. Mudslides blocked two highways in the Santa Cruz Mountains that connect the region to the San Francisco Bay Area.

The flooding in Santa Cruz County besieged an area already reeling from some of the heaviest damage from recent storms. Just last week, the confluence of a storm surge, high tides and high surf collapsed piers and flooded hundreds of homes and businesses.

The storm’s impacts continued farther south along the state’s Central Coast, with evacuation orders along rivers in Watsonville and in Monterey County.

Numerous roads were closed amid flash-flood warnings in San Luis Obispo County, and California Polytechnic State University shut down for the day. The university reported that students, faculty and animals were being evacuated from agricultural facilities with a reservoir about to breach.

Late Sunday, President Biden approved an emergency declaration for 17 counties in California, allowing for federal assistance from the Federal Emergency Management Agency and the Department of Homeland Security in relief and rescue efforts.