The Duke of Sussex, 38, also told presenter Anderson Cooper on CBS’s 60 Minutes that Camilla was the “villain” as his father’s “other woman”.

And he accused Camilla of showing an “open willingness” to trade information with the press as she campaigned to marry Charles.

The new interview aired on Sunday night ahead of the book’s release on Tuesday.

Asked why he referred to Camilla, 75, as dangerous in Spare, Harry said: “Because of the need for her to rehabilitate her image.

“That made her dangerous because of the connections that she was forging within the British press. 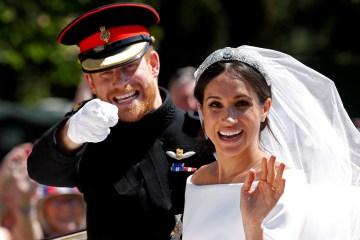 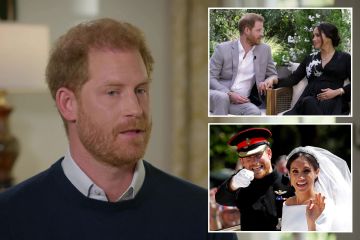 “And there was open willingness on both sides to trade information.

“And with a family built on hierarchy, and with her, on the way to being Queen Consort, there was going to be people or bodies left in the street because of that.”

Earlier in the interview, he parroted claims of her being the “other woman”, adding: “She was the villain. She was the third person in their marriage. She needed to rehabilitate her image.”

Harry also addressed his admission in the book that he had taken psychedelic drugs including Ayahuasca and psilocybin mushrooms.

He claimed that it helped him to deal with the scars left by his mother Diana’s death in a car crash in August 1997.

He said: “I would never recommend people to do this recreationally.

“But doing it with the right people if you are suffering from a huge amount of loss, grief or trauma, then these things have a way of working as a medicine.

“For me, they cleared the windscreen, the windshield, the misery of loss.

“They cleared away this idea that I had in my head that I needed to cry to prove to my mother that I missed her.

“When in fact, all she wanted was for me to be happy.”

Harry also claimed in the interview that he was not invited to join the rest of the Royal Family on a plane to Balmoral when the Queen died in September.

He explained: “I asked my brother, I said, ‘What are your plans? How are you and Kate getting up there?’

“And then, a couple of hours later, you know, all of the family members that live within the Windsor and Ascot area were jumping on a plane together, a plane with 12, 14, maybe 16 seats.”

Anderson Cooper asked: “You were not invited on that plane?”

Harry answered: “I was not invited.”

The Prince relived his final moments with the Queen during his interview.

He told how he was “happy” for her as she lay on her deathbed as it meant she would be reunited with her beloved Prince Philip.

The interview is round two of the Duke trashing the family after he sat down with ITV’s Tom Bradby.

He told his journalist friend that Prince William and Princess Catherine failed to welcome Meghan Markle into the family because of stereotypes about her as a biracial American actress.

He also said the King was never made to be single dad before hitting back at claims he was scathing towards Queen Camilla.

The Duke then said he no longer recognises his own family, before conceding that they probably feel the same about him.

And he sensationally denied ever calling his relatives racist – despite telling Oprah Winfrey a member of the family had “concerns” about his son Archie’s skin colour.

Millions of ITV viewers were stunned to see Harry distance himself from incendiary comments made on US telly to Oprah in 2021.

Bradby had asked Harry, 38, to elaborate on the Oprah interview in which “you accused members of your family of racism”.

Millions of viewers were left open-mouthed when Harry replied: “No I didn’t.”

Even Bradby looked stunned as the Duke of Sussex passed the blame elsewhere, muttering: “The British press said that.”

Harry then dug an even bigger hole by asking Bradby: “Did Meghan ever mention that they’re racist?”

Harry, promoting his book Spare, replied: “There was – there was concern about his skin colour.”

He was then asked: “Wouldn’t you describe that as essentially racist?”

Harry cryptically responded: “I wouldn’t, not having lived within that family.”

He interrupted Brady’s attempts to question further, and suggested it was “unconscious bias”, not racism, and they can now ”learn and grow” and be “part of the solution”, instead of the problem.