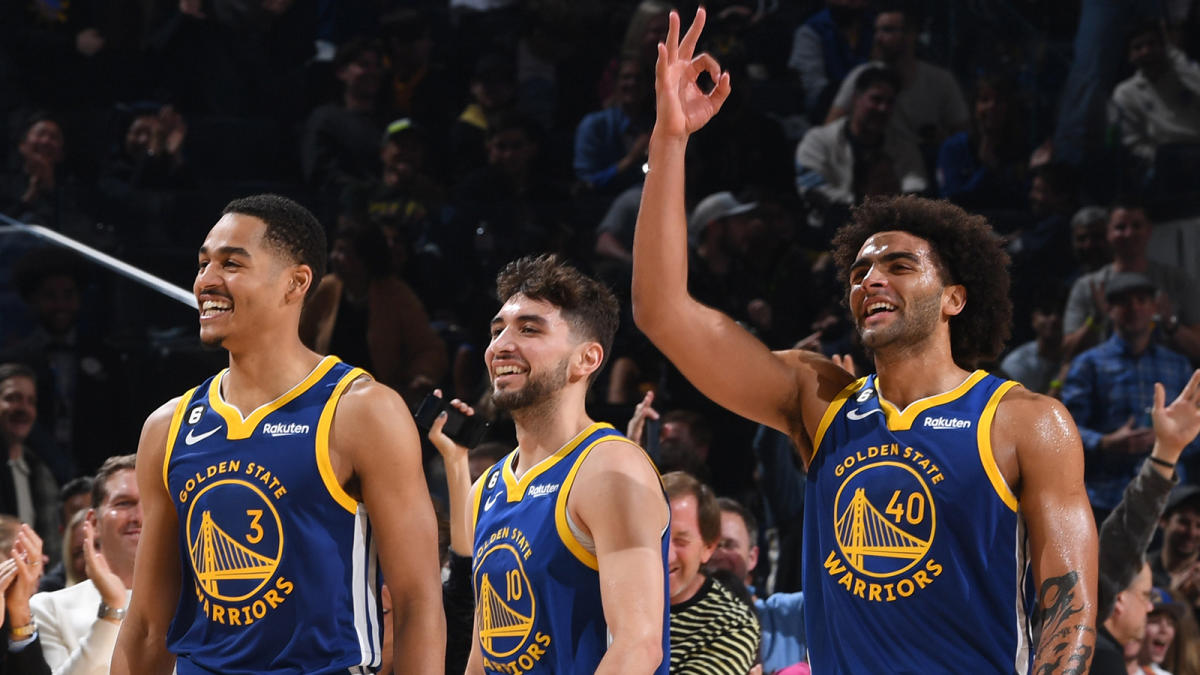 SAN FRANCISCO — Time is ticking for the Warriors. Not so much on the regular-season or even the standings. While being idle Friday night, they moved all the way up to No. 6 in the Western Conference standings before their Saturday night matchup with the Orlando Magic. This doesn’t even have to do with the Feb. 9 NBA trade deadline.

It’s all about two surprising contributors off two-way contracts in Anthony Lamb and Ty Jerome.

Due to injuries and lack of experience from the Warriors’ young bench, Steve Kerr has turned to Lamb and Jerome more than anyone could have expected. And the two have delivered. But Kerr knows some unfortunate, and somewhat unfair, changes are going to have to be made.

Two weeks before the 2022-23 regular season began, the Warriors signed Jerome to a two-way contract and did the same with Lamb one day later. They viewed Jerome as a veteran point guard with a winning past who could easily fit in and give quality minutes when needed. Lamb actually first impressed Kerr in the G League when he was scouting a Santa Cruz game and Lamb was lighting up the Warriors’ G League affiliate from 3-point range and with his hustle on defense.

Both have fulfilled those roles beyond what Kerr and the Warriors envisioned. However, there are rules with two-way contracts. Better said, there are restrictions.

A player signed to a two-way contract is permitted to being on a team’s active list for no more than 50 games during the regular season and cannot appear in playoff games. That means even if Lamb or Jerome is suited up for a game and doesn’t see the court, it still counts against the limit.

Lamb already has played in 31 games this season, and Jerome has played 23. Jerome also has two games where he was active but didn’t play, putting his number at 25. To put everything into perspective, the Warriors have played 39 games this season and still have another 43 to go.

“We have to navigate that,” Kerr said. “There will be some games where those guys will not suit up.”

Andre Iguodala making his season debut Saturday against the Magic should help make life easier for Kerr. The same goes with Andrew Wiggins‘ impending return. Wiggins has missed the Warriors’ last 15 game to an adductor strain and two illnesses, but is listed as probable on the Warriors’ injury report after practicing with the team the day prior.

But Lamb’s importance right now is hard to ignore. He was the first player off the bench in Wednesday’s buzzer-beating loss to the Detroit Pistons, scored nine points off the bench in the first quarter and finished with 17. With Wiggins and Iguodala being out, plus Jonathan Kuminga currently being in a walking boot with a right foot sprain, there’s no way Kerr could keep Lamb stuck to the sidelines.

He was active for only one of the Warriors’ first seven games. Lamb then was inactive for the next two before playing 30 straight, starting three and shooting 39.4 percent from deep.

“I think with his confidence,” Iguodala said Friday when asked what has impressed him most about Lamb. “I don’t think people understand how important your — you have to have a high level of confidence, but at the same time some humility with your confidence, especially with who you are.

“There’s only one or two guys per team that they can do whatever they want. There’s no real sacrifice. Everyone else has to fit a role. It’s a less is more mentality, and I think he’s done a really good job and really good balance. He’s always shot the ball really well. I don’t think anyone knew he shot the ball this well. But he continues to work every day, he’s here early and he’s here late and guys like him — Moses Moody is the same way, just the way they carry themselves. It says a lot about the culture, just with them looking for guys like that who will make the most of their time here and even extend their time because of their work ethics.”

Jerome led the bench with 18 points in Wednesday night’s loss. He’s never in a rush, can knock down 3-pointers, get in the lane for floaters and has exceeded the outside’s expectations with his defense.

His season has seen him be inactive for the first three games, followed by playing the next eight and being in and out sporadically. Everything changed when Steph Curry went down to a left shoulder subluxation. Kerr knew the Warriors needed Jerome now more than ever.

Since Curry went down, Jerome has played 11 straight games. Over that span, he has averaged 10.1 points, 3.2 assists and 2.4 rebounds on 21.9 minutes per game while also shooting 49.4 percent from the field, 41.2 percent from beyond the arc and 92.9 percent at the free-throw line.

To Curry, none of this is a surprise. Curry has played against Jerome since the 25-year-old guard entered the league in 2019, and could see he’s a winning player. He just needed a winning situation.

“It’s an interesting dynamic,” Curry said Friday. “I used to play against him in OKC. You knew he knew how to play, has a high IQ. He was just looking for an opportunity to be in a winning organization in the sense of I have an opportunity to impact that. Who would have known it would be from a two-way position and he’d have an opportunity to come in a play big minutes with the injuries we’ve had and all that.

“But even early in the season when we were quote unquote fully healthy, him and A. Lamb were getting some cracks at it in terms of the rotation. He’s just a gamer. He’s a guy that demonstrated that in college, battle tested and you find a way to show that at every level. It’s been awesome to watch.”

The Warriors are getting Wiggins and Iguodala back in the immediate future. Curry is up next, as soon as Jan. 13 against the San Antonio Spurs at the Alamodome. Those three being back in uniform will make life easier for Kerr, but put Lamb and Jerome in underserved positions.

Then there’s the Warriors’ 15th and final roster spot. Right now, it’s open and there for the taking. Lamb or Jerome might snatch it. The Warriors also could use it for the buyout market or simply keep it open to save money.

No matter what happens next, it’s hard to imagine the Warriors without Lamb and Jerome at this point of the season. It’s equally as easy to see them contributing to a playoff win. That can’t happen, though. Rules are rules, however unfair they seem to be.

Golden State once again has players who have gone past any kind of preseason predictions, and will have to face the harsh realities of that luxury.