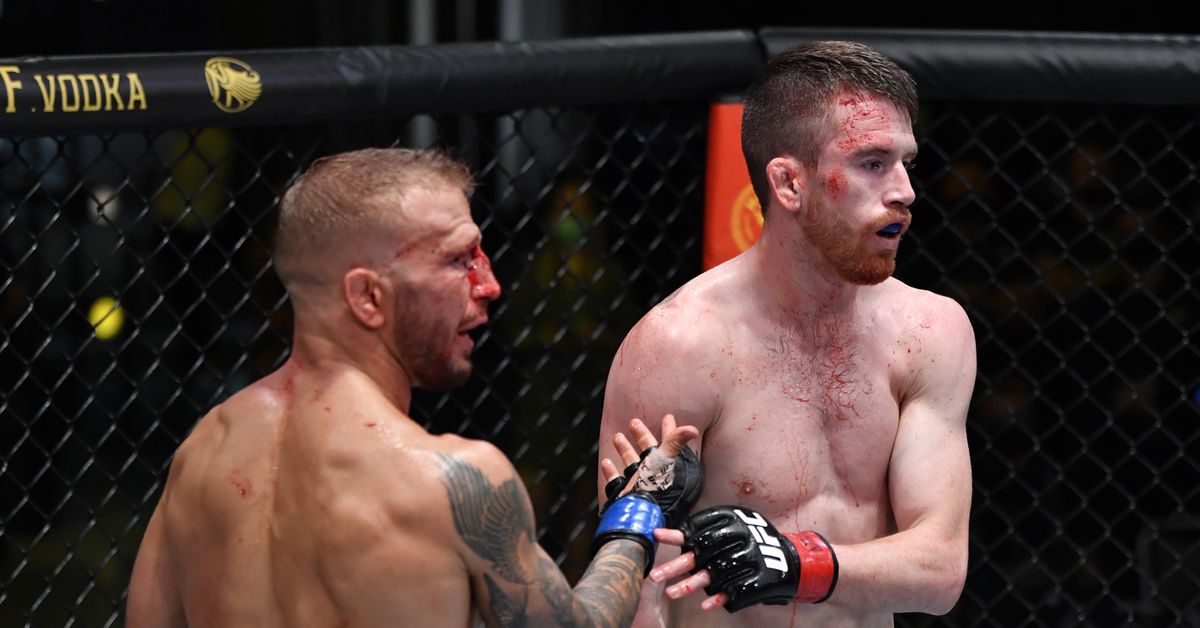 Cory Sandhagen wasn’t too fond of T.J. Dillashaw’s attempt to fight through a severe injury.

UFC 280’s co-main event this past October between current bantamweight champion Aljamain Sterling and Dillashaw was rather anti-climactic. In the opening minute, it became evident that something was wrong with Dillashaw’s shoulder as he did his best to fend off the talented wrestler.

Dillashaw revealed after his second-round TKO loss that he’d been dealing with a bad reoccurring dislocation dating back to April 2022. Despite Dillashaw and his team being well aware of the injury — along with referee Marc Goddard, who was informed right before the bout — the fight still happened. As a perennial top contender, Sandhagen is in the camp that the opportunity clearly should have gone to someone healthier.

“It wasn’t cool,” Sandhagen told MiddleEasy. “I think he didn’t handle that situation like a gentleman. I think that while you don’t have to care super deeply and compassionately about your opponents — because it’s hard to do that when you’re competing against them at the high level — I do think that you have to have some levels of compassion for the other people that are in your division.

“I think he showed a giant lack of compassion and caring about the other people in his division. That’s his way of living, I don’t really judge it too harshly, but I do think it was not that cool of a move.”

In contrast to Dillashaw, Sandhagen added how commendable it is for Sterling to discuss the likelihood of him moving to featherweight in the near future. With best friend and teammate Merab Dvalishvili hot on the heels of his own title opportunity, Sterling has made it clear that the pair will never fight.

Meanwhile, Dillashaw has since announced his retirement from MMA. The former two-time UFC champion’s last official win goes down as his split decision nod over Sandhagen in July 2021. Although Dillashaw’s shoulder injury is the primary reason for his career’s end, Sandhagen expects his old foe to stay true to the decision.

“I think that’s the right call for T.J.,” Sandhagen said. “I think he really blew it in his last title shot. I don’t really know who the UFC would match him up with. He’s getting a little bit older, he’s set in life.

“I do know that T.J. is one of the most competitive guys that I know, so I think that’s the only thing that’s gonna keep him in the loop or at least keep his imagination in the world of fighting. I don’t think it would be a wise warrior move to continue to fight when he’s getting older and well off right now.”

Sandhagen has recently gotten back on track since his encounter with Dillashaw, defeating Song Yadong via a fourth-round doctor’s stoppage TKO in September. The “Sandman” can make a big statement amongst the top contender pool with a win in his upcoming matchup opposite Marlon “Chito” Vera in the UFC Vegas 69 main event on Feb. 18.

“I think I have a lot more ways to win as I think I typically do just because I am a very technical guy,” Sandhagen said. “I think the way that ‘Chito’s’ been winning isn’t a highly reliable way of winning. What I mean by that is he’s losing most of his fights then catches the person and hits them hard — the guy obviously must hit hard — but the people that he’s also knocking out and dropping are people that have kind of shown signs of that happening fairly easy for them anyway. Whereas me, I have a very good chin on me.

“I don’t think that his puncher’s chance is a super reliable way to win. I think that as far as wrestling and grappling goes, I have the nod there. The striking, like I said, he has a puncher’s chance, but as far as being technical and having more tools, being more athletic, and having a more creative style, I think that all of those have the nod in my favor. As long as I don’t get hit with any hard s***, I think I’ll walk out of the cage a winner.”

Anticipation. Chael Sonnen: Francis Ngannou vs. Jon Jones is ‘biggest fight you can put on in our industry’

UFC veteran Kevin Lee has signed with @AliAbdelaziz00 for management. Statement from Ali about the signing:

“Kevin is a longtime training partner. He hasn’t even hit his peak yet. He’s always been a star but in the next 12 months, I think he will be a superstar.”

I yelled COW to a woman on a bike. She gave me the finger, then plowed right into the COW.
I tried.

“Everyone has talent. What is rare is the courage to follow the talent to the dark place where it leads”

Talk about calm before the storm.

Hard to disagree with “Sandman.” At the same time, MMA is a singular sport, though.