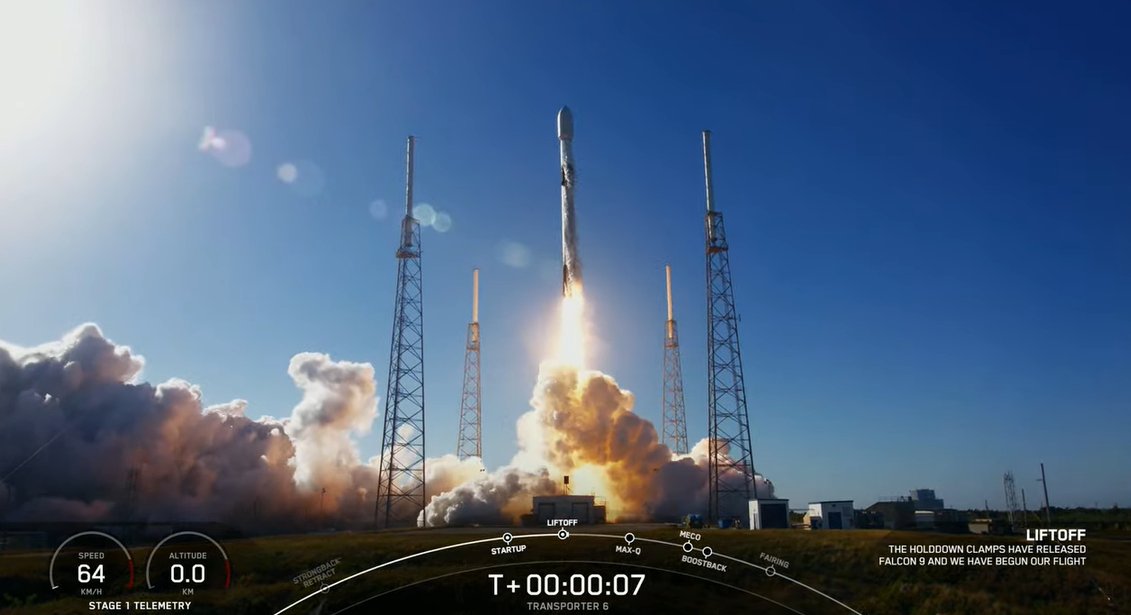 SpaceX is off to a flying start in the new year.

A SpaceX Falcon 9 rocket launched into a brilliant blue sky this morning (Jan. 3) from Cape Canaveral Space Force Station in Florida, carrying 114 satellites to orbit — the second-most spacecraft ever lofted on a single mission.

Today’s flight, called Transporter-6, is notable for another reason as well: It marked the 15th mission for this particular Falcon 9‘s first stage, tying a reusability record that SpaceX set just last month. It was also SpaceX’s 200th flight and the company’s 161st successful rocket landing.

The Falcon 9 lifted off today at 9:56 a.m. EST (1456 GMT), kicking off Transporter-6, SpaceX’s sixth dedicated small-satellite rideshare mission. The 114 payloads on the flight include “cubesats, microsats, picosats and orbital transfer vehicles carrying spacecraft to be deployed at a later time,” SpaceX wrote in a mission description (opens in new tab).

Three dozen of those cubesats are “SuperDoves (opens in new tab),” Earth-observing satellites the size of a loaf of bread built and operated by the San Francisco-based company Planet.

Among the many satellites flying on Transporter-6 are six craft that will be operated by Virginia-based space analytics company Spire Global, as well as EOS SAT-1, the first spacecraft in a seven-satellite, agriculture-focused constellation planned by EOS Data Analytics (EOSDA).

The EOSDA network — which will be fully up and running by 2025, if all goes according to plan — will study farmlands and forests around the world. Its data will help customers monitor crop growth and health and implement sustainable practices, among other applications, company representatives said.

“This launch brings new game-changing possibilities of satellite technologies to the agricultural industry,” EOSDA CEO Artiom Anisimov said in a statement. “EOSDA will now work with proprietary datasets to provide even deeper and more accurate insights for its customers and partners.”

About 2.5 minutes after liftoff this morning, the Falcon 9’s two stages separated, and the first stage started coming back down to Earth. That homeward journey ended six minutes later, when the booster touched down successfully at Cape Canaveral.

SpaceX has used the Falcon 9 first stage on this mission for a variety of different flights. It launched 10 different Starlink internet satellite missions, as well the company’s Transporter-2 rideshare mission and there other commercial satellite flights.

The Falcon 9’s upper stage, meanwhile, continued hauling its many payloads skyward. If all goes according to plan, the first of the 114 satellites will be deployed about 58.5 minutes after launch. The final one, EOS SAT-1, will separate from the rocket about 33 minutes later, just over 91 minutes after liftoff.

Packed though Transporter-6’s manifest may be, the mission still fell well short of the most-satellites-launched record. That mark is held by SpaceX’s Transporter-1, which sent 143 satellites to orbit in January 2021.

Big rockets like the Falcon 9 and India’s PSLV (which launched 104 spacecraft on a single mission in 2017) aren’t the only option for small-satellite operators. They can also choose to get dedicated rides to orbit on small vehicles, such as Rocket Lab’s Electron or Virgin Orbit’s air-launched LauncherOne.