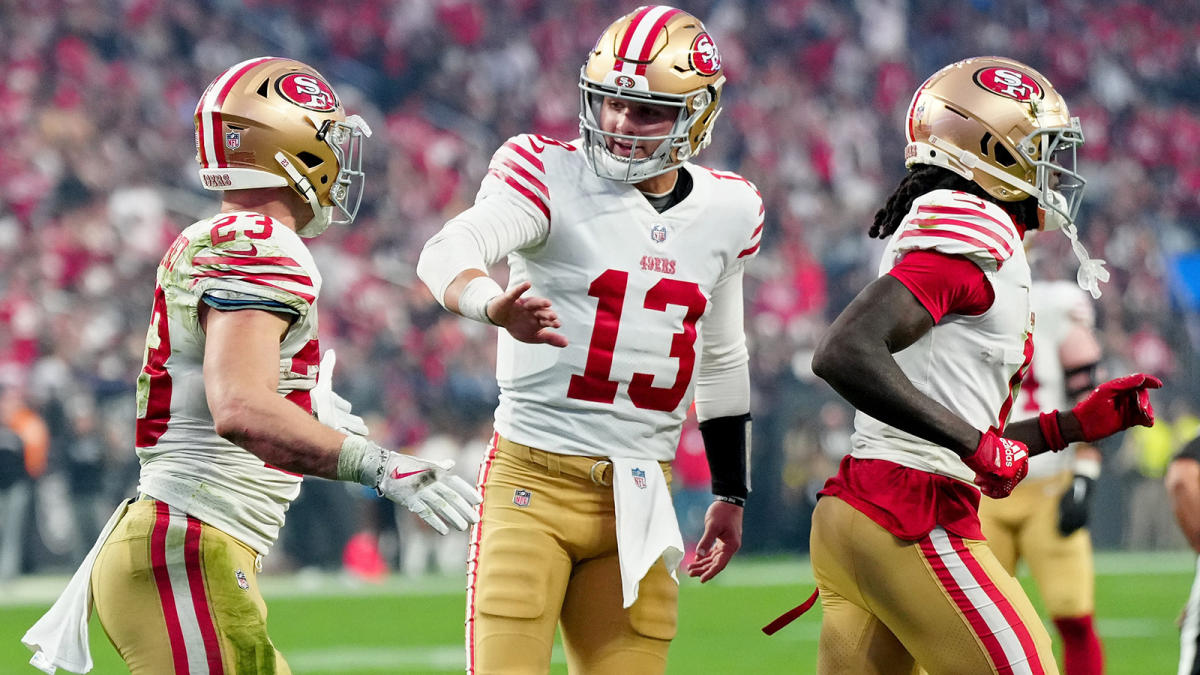 The 49ers’ 37-34 win over the Las Vegas Raiders on Sunday was a wild ride, and the club’s PFF grades reflect both the good and the bad.

The notoriously stingy 49ers defense allowed 500 yards of offense by the Raiders — 365 yards passing by Jarrett Stidham and 135 yards rushing. Kyle Shanahan shared that there was not one level of the defense that made more mistakes than the other. The head coach saw mistakes across the board.

“Everybody had their fair share, whether it was secondary, linebackers or the defensive line,” Shanahan said on Monday via conference call. “On that first drive, we just got beat on a play action in a cover-two look that resulted in an easy explosive there on that third-and-one.

“I thought there was a number of times that we lost our rush lanes that I believe gave him two scrambling first downs on third down.”

With the defense not playing up to par, the 49ers’ offense and special teams needed to step up, and they did. In his fourth career start, Brock Purdy completed 22 of his 35 attempts for 284 yards, two touchdowns and one interception.

The rookie had the support of Christian McCaffrey on the field, who ran the ball 19 times for 121 yards and a rushing touchdown and caught six of his nine targets for 72 yards and a receiving score.

Brandon Aiyuk was Purdy’s favorite target, catching nine of his 12 targets for 101 yards — eight of which, for 99 yards, were in the second half.

Here are more highlights from the 49ers’ Week 17 win:

Purdy was most accurate on intermediate attempts 10 to 19 yards from scrimmage completing six of his seven attempts for 84 yards and one touchdown. The Iowa State product was less successful on his deep passes completing only one of his five attempts for 28 yards on passes 20 yards or further.

Purdy was blitzed on 12 of his 35 dropbacks (34.3 percent) and completed seven of his 12 attempts for 99 yards when blitzed. Shanahan only called two screen passes, but Purdy completed both attempts for 80 yards — one to Ray-Ray McCloud and Christian McCaffrey.

Kroft was on the field for 18 snaps and his overall grade was the best on offense. The tight end was not targeted but was heavily involved in the blocking scheme receiving a 79.6 in run blocking and 73.1 in pass blocking.

Aiyuk caught nine of his 12 targets for 101 yards and one touchdown, which is a season-best.  It was the Arizona State product’s first 100-yard game since San Francisco’s Week 18 win over the Los Angeles Rams. Aiyuk only needs 44 yards to reach the 1,000-yard benchmark for the 2022 season.

Aiyuk’s overall grade was brought down by his 38.6 run-blocking number that Shanahan indirectly referred to.

“I know wideouts only really get noticed when they get catches, but they are either blocking or running a route on every single other play too,” Shanahan said. “Just whether they get the ball or not isn’t really what you always judge off of.

“There’re responsibilities on each play, so that’s why you can’t always judge how great of a game it was based off of stats. I know it was great that he got over 100 yards, which I was happy for him. He deserved it. He was one of the reasons why we won there at the end. I’m just saying that he’s had some better games throughout the year.”

McCaffrey was heavily involved in both the ground game and passing attack. It was the running back’s third 100-yard rushing game in four weeks. 71 of the Stanford product’s 72 receiving yards came after the catch.

The All-Pro running back lined up primarily in the backfield on Sunday, once in the slot and one time out wide.

Purdy was under pressure on just nine of his 35 dropbacks (25.7 percent) despite being blitzed 12 times. The offensive line only allowed five total pressures.

The defensive tackle recorded one quarterback pressure — a hurry but Armstead also recorded two run stops and was the primary reason the 49ers’ defense forced a turnover on downs during the goal line stand.

Bosa’s 10 quarterback pressures — six hits and four hurries, lead the team. The Defensive Player of the Year front-runner did not record a sack for the third time this season but still currently leads the NFL with 17.5 sacks, 88 pressures, and 30 quarterback hits.

The All-Pro linebacker had a tough game registering seven tackles, but missing two. Warner registered four run stops but allowed three receptions for 85 yards in coverage and was called for two penalties.

The second-year defensive back recorded six tackles, and missed one. Lenoir allowed five catches on seven attempts for 108 yards, 20 after the catch and was called for one penalty. His 36.9 overall grade was his second lowest of the season.