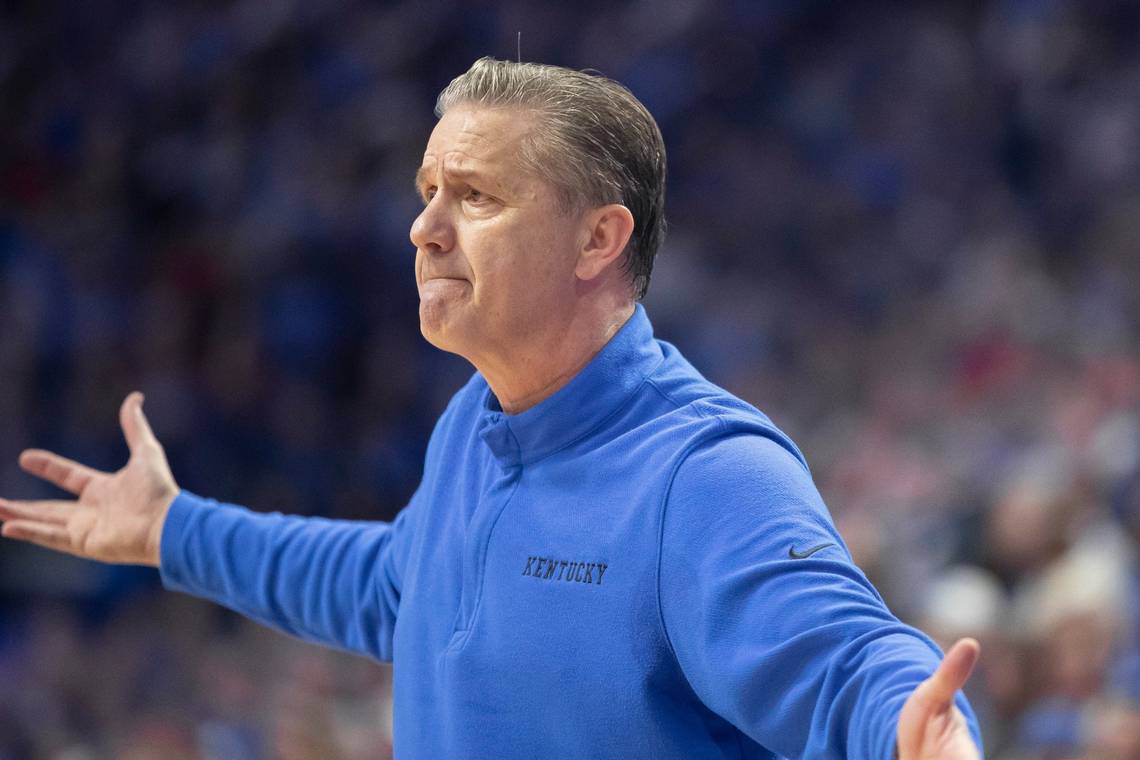 After starting the season as the nation’s No. 4 college basketball team, Kentucky is no longer in the Associated Press Top 25 poll.

The Wildcats dropped from No. 19 to unranked Monday following an 89-75 loss to Missouri last week. UK rebounded to beat Louisville by 23 points in Rupp Arena on Saturday, but the victory over its reeling rival wasn’t enough to stay in the Top 25.

Kentucky (9-4) will play Louisiana State at home Tuesday night before traveling to Tuscaloosa for a date with Alabama — the top-ranked team in the Southeastern Conference — Saturday afternoon.

UK was 29th in overall voting in Monday’s poll. This is the first time since the end of the 2020-21 season — when Kentucky finished with a 9-16 record — that the Cats have not been ranked.

Purdue (13-0) remained No. 1 in Monday’s poll and is now one of two Division I college basketball teams that remain undefeated this season. The other is New Mexico (14-0), coached by Richard Pitino and ranked at No. 21 in the latest poll.

The Boilermakers defeated Duke and Gonzaga in non-conference games this season. They play No. 24 Ohio State this week and then aren’t scheduled to play another Top 25 team until traveling to No. 15 Indiana on Feb. 4.

Following Purdue in the new top five are No. 2 Houston, No. 3 Kansas, No. 4 UConn and No. 5 Arizona. UConn suffered its first loss of the season Saturday, an 83-73 defeat at Xavier. The Huskies were No. 2 in the previous rankings and just a few votes away from the top spot.

The league also has three teams near a national ranking. LSU was 26th in the voting, followed by Mississippi State at 28th and UK at 29th, making the Cats the SEC’s eighth-best team, according to the AP voters, with conference play ramping up this week.

Missouri (12-1), the team responsible for Kentucky’s ouster from the Top 25 rankings, was 32nd in voting last week after defeating then-No. 16 Illinois by 22 points in St. Louis on Dec. 22. The Tigers’ lone loss came at home against third-ranked Kansas, a 95-67 defeat.

Mizzou plays at Arkansas at 8:30 p.m. Wednesday on the SEC Network, a game that should be a good barometer for both teams.

North Carolina, the nation’s preseason No. 1-ranked team, fell out of the Top 25 again Monday after rejoining the rankings at No. 25 last week. The Tar Heels had been absent from the rankings the previous three weeks before that.

UNC (9-5) suffered four consecutive losses earlier this season and most recently was defeated by Pittsburgh, 76-74, on the road Saturday. The Tar Heels did not receive a single vote in the latest poll.

‘The kid really works at it.’ UK freshman is one of nation’s best three-point shooters.

Jacob Toppin stars against Louisville. ‘And now he’s gonna do it against better teams.’

As expected, Kentucky blows out Louisville. Can Cats carry it over to a quality opponent?

Is slow really the way to go for Kentucky basketball? We’ll soon find out.

What can Kentucky expect in the SEC? A look at the top players, new faces, odds and more.

From UMass to Memphis to Kentucky, the Calipari coaching tree has yet to produce a star