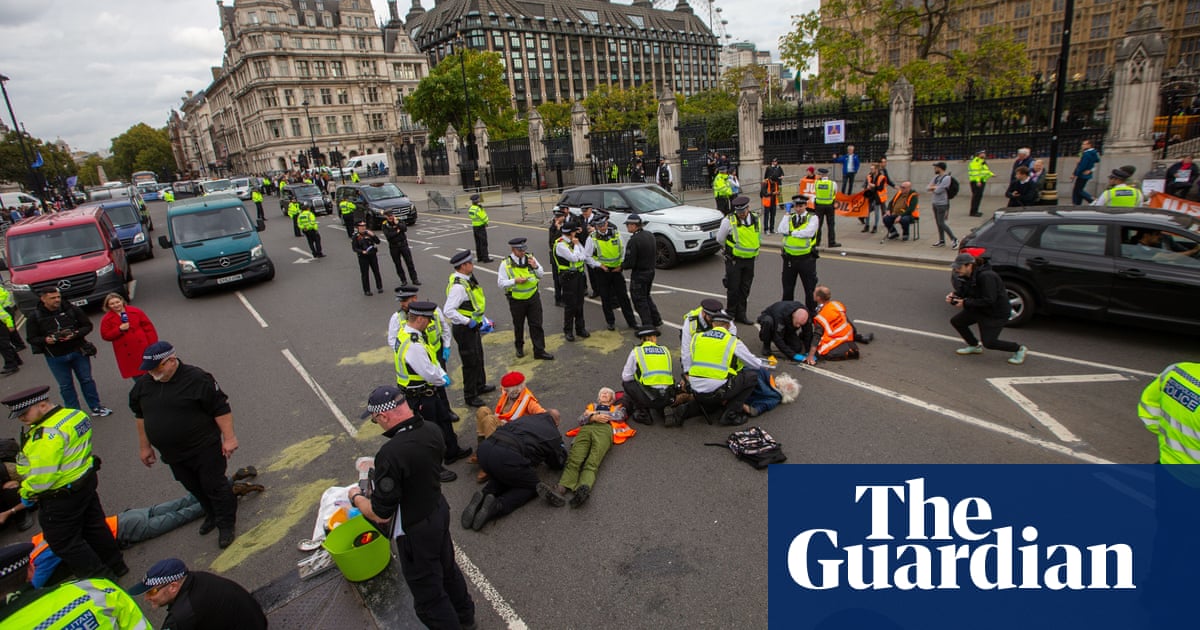 “It’s 2023 and XR has quit,” Just Stop Oil said in a statement. “But it’s 2023, and we are barrelling down the highway to the loss of ordered civil society, as extreme weather impacts tens of millions, as our country becomes unrecognisable … there is now a need to face reality.

“We must move from disobedience into civil resistance – this is what the nurses and paramedics are doing. They are on the frontline of the harm being wreaked on us and have said no more.”

“In the UK right now, nurses, ambulance drivers and railway workers are on strike because they understand that public disruption is vital to demand changes that governments are not willing or are too scared to address.”

In recent years, XR has led its supporters into blockading London streets and bridges for days, smashing bank headquarters’ windows and spraying fake blood on the Treasury. But on Sunday, the group announced “we quit” in a new year resolution to “prioritise attendance over arrest and relationships over roadblocks”.

Since its radical start, XR has become comparatively more moderate. It has called for 100,000 people to take to the streets of Westminster in April, but cancelled its last series of protests in London after the queen’s death. Recent demonstrations at private airfields led to no arrests. Trials continue of XR supporters involved in direct actions over previous years.

On the other hand, over the past year, supporters of the Just Stop Oil campaign have smashed petrol pumps, blockaded oil terminals, glued themselves to the streets of London, zip-tied their necks to goalposts at Premier League football matches and thrown tomato soup over one of the world’s most famous oil paintings.

More than 2,000 arrests were made during JSO actions, and 138 of its activists have been held behind bars either awaiting trial or while serving a sentence this year. According to the group, 12 are currently in jail.

In a column for the anarchist news website Freedom, Jan Goodey, a university lecturer serving a six-month sentence for climbing a gantry over the M25, said the household energy crisis had vindicated Insulate Britain’s use of disruptive tactics to demand home insulation. “Words of hope and encouragement are ineffective and irrelevant; it is action, resistance, and solidarity that work,” he wrote.

One activist who has campaigned with both XR and Just Stop Oil said he was conflicted about XR’s announcement, which may attract more supporters but at the risk of effectiveness. “My concern is our lack of time,” he said. “If we don’t actively, noisily push for change now, later may prove way too late to save anything.

Another said it appeared XR was repositioning itself as a more moderate group, as flank groups such as Just Stop Oil monopolised and radicalised more extreme direct actions.

“This synergistic relationship is likely to benefit the overall climate movement, as people can join groups that appeal most to them.”