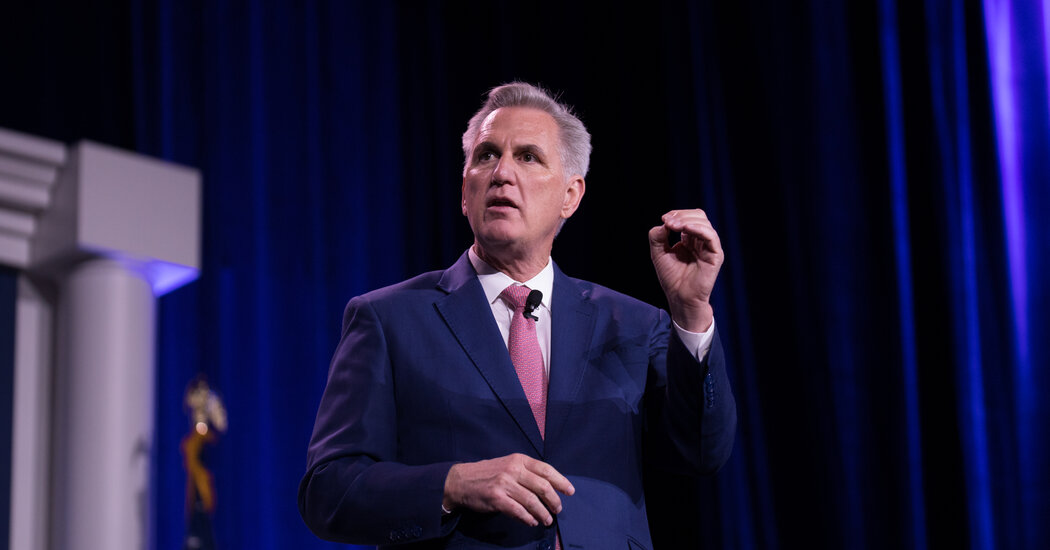 WASHINGTON — A big factor in Representative Kevin McCarthy’s favor as he labors to become speaker of the House is that no viable candidate has emerged to challenge him.

Even though a group of hard-right lawmakers has pledged to block the California Republican’s ascent to the speakership, imperiling his path to the top job, he was nominated by a lopsided majority of his conference and has remained the only broadly supported candidate for the post.

The threat that some of Mr. McCarthy’s allies have dangled — that moderate Republicans could band together with Democrats to elect a Democratic speaker should he fail — is highly improbable.

But the landscape could quickly change should Mr. McCarthy falter on Tuesday, when the new Congress convenes and lawmakers vote to elect a new speaker. House precedent requires that lawmakers continue voting on ballot after ballot if no one is able to win the gavel. If Mr. McCarthy is unable to quickly win election, Republicans would be under immense pressure to coalesce around an alternative, ending a potentially chaotic and divisive fight on the floor that could taint the start of their majority in the House.

Here are the Republicans to watch:

Mr. Scalise, the No. 2 House Republican, is in some ways Mr. McCarthy’s obvious successor.

Deeply conservative and always on message, Mr. Scalise began his ascent up the leadership ranks in Congress when he became chairman of the influential right-wing Republican Study Committee and beat out a candidate who endorsed a more combative approach to dealing with party leadership. Speculation about his ambition to one day become speaker have followed him ever since.

The party’s hard-right flank is not altogether trusting of Mr. Scalise, in part because the whip has sometimes quietly staked out neutral or mainstream positions when his colleagues have gone the other way. He broke with most other top House leaders in declining to endorse the primary challenger to Representative Liz Cheney of Wyoming, who was exiled by Republicans for repudiating former President Donald J. Trump’s election lies.

Following the 2022 midterm elections, Democrats maintained control of the Senate while Republicans flipped the House.

At the internal conference election to choose party leaders in November, Representatives Marjorie Taylor Greene of Georgia and Matt Gaetz of Florida pressed Mr. Scalise about comments he made on a private conference call days after the Jan. 6, 2021 riot. During that call, Mr. Scalise agreed with Mr. McCarthy that Mr. Gaetz’s comments about conservatives he deemed insufficiently loyal to Mr. Trump had been dangerous and “potentially illegal.”

Still, many rank-and-file lawmakers regard Mr. Scalise as a solid alternative and one seen by some conservative lawmakers as a more palatable option than Mr. McCarthy.

The Ohio Republican, a founder of the Freedom Caucus, helped upend Mr. McCarthy’s last bid to become speaker in 2015. He continued to be an irritant to the California Republican when he challenged Mr. McCarthy, unsuccessfully, for the top leadership position in 2018.

But Mr. McCarthy worked to mend fences with Mr. Jordan when he paved the way for him to take the top seat on the Judiciary Committee and dispatched him as a pugilistic defender of Mr. Trump during two impeachments.

It is unclear whether the more moderate lawmakers in the party would back a bid by Mr. Jordan for speaker. But the Republican has a number of disciples among the far-right group of lawmakers who have vowed to oppose Mr. McCarthy.

Mr. McHenry came to Congress in 2005 at the age of 29 as a conservative rabble-rouser, and was frequently seen yelling on the House floor or on cable news shows.

But in the years that followed, the silver-haired, bow tie-wearing Mr. McHenry underwent a metamorphosis. He became chief deputy whip to then-Speaker John A. Boehner of Ohio, who later predicted that the North Carolina Republican would become speaker himself one day. He pointedly took a lower-profile, behind-the-scenes approach to the job. And he developed a reputation among other lawmakers for his braininess and interest in tax and financial policy.

Mr. McHenry, who has for years been an informal adviser to Mr. McCarthy, has previously tried to scuttle the notion that he was interested in any top leadership post, saying he would rather chair the Financial Services Committee. He once gave the Republican leader a silver bowl in a joking reference to a famous scene from the crime drama series “The Wire,” in which a former mayor tells an incoming one that the vaunted top job is akin to eating silver bowls of feces all day.

He is the only Republican lawmaker whose name has been floated as a possible candidate for speaker who voted to certify the 2020 presidential election.

When Ms. Stefanik first came to the House in 2014 as the youngest woman ever elected to Congress, she was viewed as a rising star in the mold of then-Speaker Paul Ryan of Wisconsin, who had hired her to work on his 2012 campaign for vice president.

She presented herself as a moderate pragmatist willing to work with Democrats and hoping to expand the party’s appeal. When Mr. Trump’s star began to rise in the Republican Party, she remained so skeptical of his inflammatory style that she refused to say his name in 2016 when she rolled out a tepid endorsement of her party’s presidential nominee.

But she has undergone a profound political metamorphosis. Ms. Stefanik is now one of the former president’s most vociferous and aggressive defenders in Congress. She became the No. 3 House Republican in May 2021 after House Republicans ousted Ms. Cheney from the post for her vocal criticism of Mr. Trump.