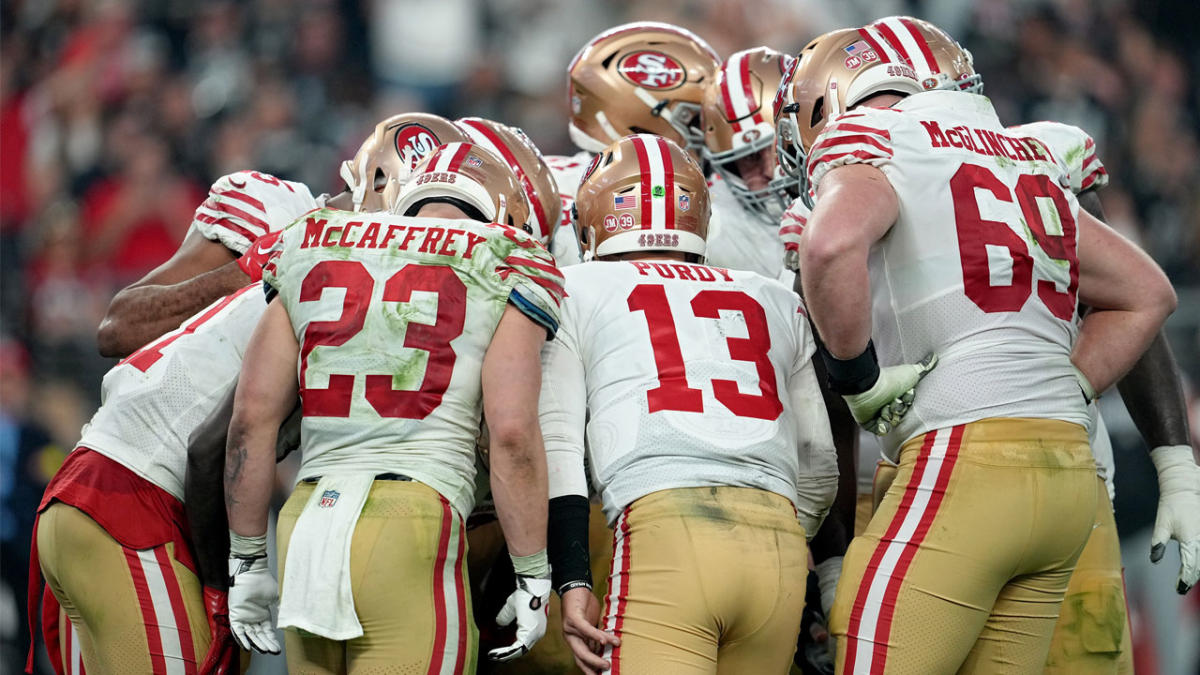 The 49ers might have underestimated Las Vegas Raiders starting quarterback Jarrett Stidham, as defensive end Nick Bosa said. But, ultimately, the defense came through with the play of the game in the 49ers’ 37-34 overtime victory at Allegiant Stadium on Sunday.

Bosa pushed Raiders left tackle Kolton Miller into Stidham as he was throwing. Safety Tashaun Gipson intercepted the wobbler, and returned it 56 yards in overtime to set up Robbie Gould’s winning kick.

“I think it was a good game for us,” 49ers coach Kyle Shanahan said. “We didn’t play perfect. But to still be able to find a way to win, I’m real proud of the guys.”

Here are the grades from the 49ers’ Week 17 victory:

Running back Christian McCaffrey had himself quite a day, and it started with a 37-yard run on a third-and-3 situation on the opening drive of the game.

McCaffrey finished with 121 yards and a touchdown on 19 rushing attempts.

Rookie running back Jordan Mason gave the 49ers a seven-point lead with 2:17 remaining in regulation with a 14-yard touchdown run. As a team, the 49ers gained 170 yards rushing with a 6.3 average.

The 49ers’ offensive line, especially right tackle Mike McGlinchey, did a good job of neutralizing Raiders defensive end Maxx Crosby. The Raiders did not register any sacks in the game.

Purdy faced some adversity and responded at the right times. Purdy completed 22 of 35 pass attempts for 284 yards with two touchdowns, one interception and a passer rating of 95.4.

“Today showed us this dude’s on a different level,” 49ers receiver Brandon Aiyuk said of Purdy, who helped rally the 49ers from a 10-point second-half deficit.

George Kittle had four catches for 23 yards and a touchdown.

Las Vegas rushed for 135 yards on 32 rushing attempts. It was the second-most yards the 49ers have given up on the ground this season.
Josh Jacobs led the way for the Raiders with 69 yards and a touchdown on 17 rushing attempts.

The 49ers’ best run defense came when T.Y. McGill and Charles Omenihu stopped Jacobs on a fourth-down play near the goal line.

Gipson — with a lot of help from Bosa — made the play that decided the game in overtime.

Up to that point, there was not much the 49ers’ defense did right against Stidham, who completed 23 of 34 pass attempts for 365 yards with three touchdowns and two interceptions.

The 49ers had too many blown coverages. Raiders wide receiver Davante Adams had a big day with seven catches for 153 yards and two touchdowns.

The other big play from the defense was Drake Jackson’s interception off a pass that Kerry Hyder deflected. Without the two interceptions, this would have been a failing grade.

Gould usually is automatic, so it was a big surprise when he was wide right on a 41-yard attempt at the end of regulation. His game-winner came from 23 yards out.

Mitch Wishnowsky only had two punts in the game: His 37-yard punt helped the Raiders with field position on a touchdown drive in the first half. He later boomed a 57-yarder with no return.

The 49ers allowed no yards on kickoff or punt returns.

The 49ers’ offense hit its stride with a finely tuned game plan opening up big plays. Coach Kyle Shanahan’s play-calling was especially effective late in the game with the running and passing attacks meshing together.

On defense, there were way too many mistakes. Defensive coordinator DeMeco Ryans has plenty of things to clean up this week, including the team’s pass rush, which allowed big lanes for Stidham to scramble.

Either the 49ers’ defense was exposed, giving future opponents a blueprint or it was a good learning experience that came at the right time in order for San Francisco to fix its mistakes before the postseason.

The 49ers’ ninth consecutive victory looked a lot like the 2019 game against the New Orleans Saints when the offense showed it could win a shootout when the defense struggled.