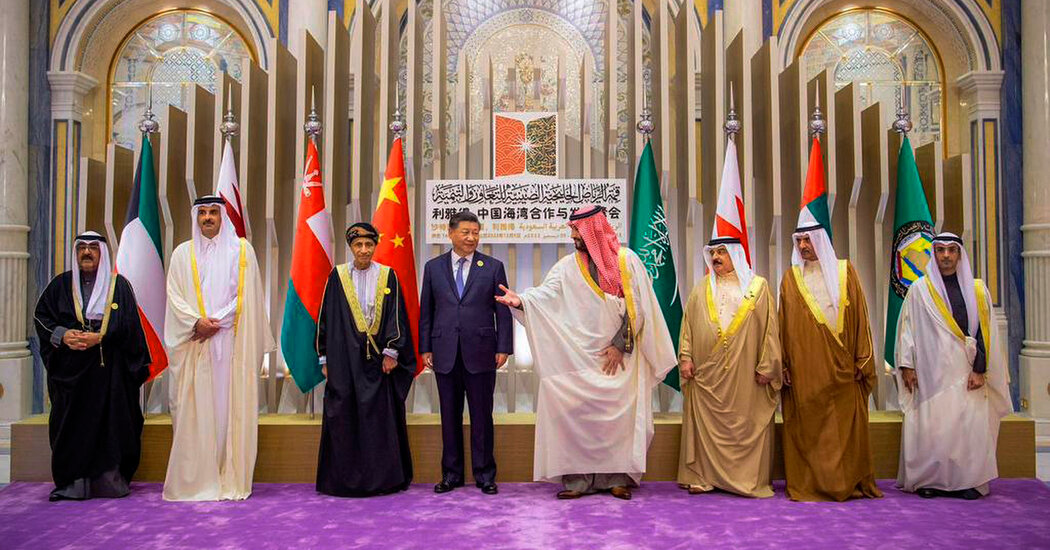 China plans to cooperate with Saudi Arabia and other Gulf countries in the fields of nuclear energy, nuclear security and space exploration, President Xi Jinping said on Friday, showcasing his nation’s strengthening ties with a region that was once firmly in the U.S. sphere of influence.

Mr. Xi was speaking in the Saudi capital, Riyadh, at a summit with rulers and officials from the six Gulf Cooperation Council countries — Bahrain, Kuwait, Oman, Qatar, Saudi Arabia, and the United Arab Emirates — during a three-day visit to Saudi Arabia. Later on Friday, he held his third and final summit of the visit with other Arab and African leaders.

Both China and Saudi Arabia described Mr. Xi’s visit this week as a historic event ushering in a new era of relations between Beijing and the Middle East, a region that once had a mainly oil-based relationship with China, a major consumer of the Gulf’s fossil fuel exports.

Arab states are increasingly building broader ties with China that extend into arms sales, technology transfers and infrastructure projects. Chinese companies are building new cities in Egypt and Saudi Arabia, selling facial recognition technology to Gulf governments and partnering with them on artificial intelligence research. Beijing has also expanded its maritime footprint in the region, an important conduit on its Belt and Road Initiative needed to reach trading partners in Europe.

In his speech on Friday, Mr. Xi said that China and the Gulf countries would establish a shared “forum” for peaceful uses of nuclear energy as well as a China-Gulf center for nuclear security, specializing in civilian uses of nuclear power and technology.

Saudi officials have spent years working on a civilian nuclear program as they try to reduce their reliance on oil, and they want to enrich the kingdom’s uranium resources, which they say are extensive enough to allow for export. But they have not yet awarded a contract for the country’s first nuclear power plants, a bidding process that a Chinese company was invited to join, alongside Korean and Russian firms. Chinese technology and know-how could be key to accelerating those plans.

American intelligence agencies have scrutinized the Saudi efforts, and analysts have raised questions about whether they could evolve into capabilities to produce weapons-grade fuel, though others say that those concerns are inflated or years away.

China also wants closer cooperation with the Gulf countries in the fields of space exploration and infrastructure, Mr. Xi said. His country will assist the Gulf States in training their own astronauts, who will be welcomed on China’s space station to work with Chinese astronauts and to conduct scientific experiments, he added.

China and the Gulf region’s governments are also discussing the establishment of a center for moon and deep space exploration, Mr. Xi said. Space is an area of particular interest for Crown Prince Mohammed bin Salman, the 37-year-old de facto ruler of Saudi Arabia, an avid science fiction fan who set up the kingdom’s first space commission in 2018.

Mr. Xi said that he was also eager for the Gulf countries to use the Shanghai Petroleum and Natural Gas Exchange for the settlement of oil and gas contracts in the Chinese currency, according to an Arabic translation of a speech that he delivered to Gulf leaders, published by the official Saudi Press Agency.

Saudi Arabia is the world’s largest exporter of crude oil, which is generally priced in U.S. dollars. Moves away from that could chip away at the dollar’s global supremacy, though Saudi Arabia is unlikely to make any major shifts as it pegs its own currency to the dollar.

“The two sides reaffirmed that they will continue to firmly support each other’s core interests, support each other in maintaining their sovereignty and territorial integrity, and exert joint efforts to defend the principle of noninterference in the internal affairs of states,” the two countries said in a joint statement on Friday.

Saudi Arabia has long been a close ally of the United States, but its ties to China have been expanding rapidly.

The kingdom’s relationship with the United States, on the other hand, has been especially strained in the past few years, with President Biden pledging on the campaign trail to treat the kingdom like a “pariah” and pressing Prince Mohammed about the murder of Jamal Khashoggi, a Washington Post columnist and Saudi citizen killed by Saudi agents in Istanbul in 2018.

Energy is among China’s top priorities in the Gulf over the next three to five years, Mr. Xi said during his speech, adding that China would continue to import large amounts of crude oil from the Gulf countries and planned to increase imports of natural gas.

China needs a steady supply of fossil fuels to keep its economy, the world’s second-largest, humming. That has been underscored by volatile energy prices after Russia’s invasion of Ukraine this year and by a Chinese energy crisis last year that darkened cities and factories with blackouts.

“Xi’s visit to Saudi Arabia makes sense in the context of China’s recent push for energy security,” said Joe Mazur, a senior analyst at Trivium China, a Beijing-based consulting firm. “Ensuring that China has enough reliable sources of energy has become a major policy priority,” he added. “Locking down solid ties with Saudi Arabia is consistent with that effort.”

China is also eager to work with Gulf governments to build large data centers and to bolster cooperation on 5G and 6G technology for broadband cellular networks, Mr. Xi said on Friday.