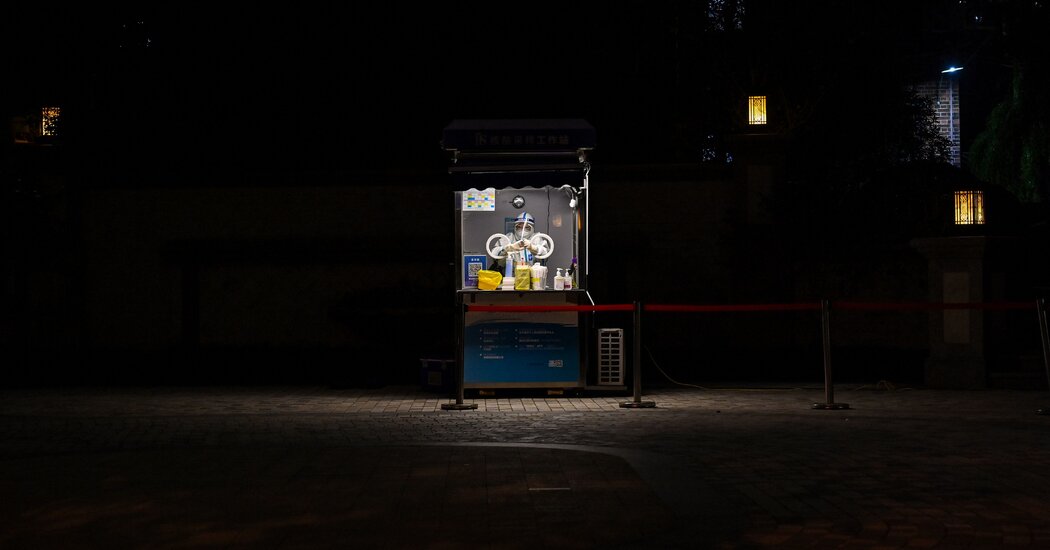 A day after China’s ruling Communist Party announced a broad rollback of the “zero Covid” restrictions that had smothered the economy and transformed life in the country, the propaganda apparatus on Thursday began the daunting task of promoting an audacious revision of history.

While the rest of the world concluded months ago that the coronavirus was becoming less deadly, Beijing presented the development as fresh news to explain its abrupt decision to undo the lockdowns that prompted widespread protests. In doing so, it also made a high-risk bet that vaccination rates in China are sufficient, or soon will be, to prevent a severe outbreak that overwhelms the nation’s hospitals.

“The pathogenicity of the Omicron strain of the coronavirus now is significantly reduced,” Wang Guiqiang, a health expert, told reporters in Beijing at a news briefing on Thursday. “Everyone should treat it with a normal heart — there is no need to be nervous or even fearful.”

The health commission released details on how residents should quarantine at home if they test positive, instead of at hospitals. Workers began tearing down testing booths. Officials detailed new limits on when and how local authorities can impose lockdowns.

For months, state media commentaries and experts had played up the threat of Omicron to justify the Chinese leader Xi Jinping’s strict policy of lockdowns, mass quarantines and testing that had disrupted daily life.

“They knew the severity of Omicron, but they did not want to tell people the truth. Instead they started to exaggerate the severity of the disease, the virulence, in order to justify the policy of ‘zero Covid,’” said Yanzhong Huang, a global health specialist and a senior fellow at the Council on Foreign Relations.

“Suddenly, you have all these experts coming out to justify why this policy relaxation is necessary,” he said, referring to health officials whose messages around the pandemic have pivoted drastically in recent days.

China’s jarring, whiplash-inducing narrative shift around Omicron points to the challenge for the party as it tries to prevent this week’s sudden abandoning of “zero Covid” from being construed as an admission of failure and a stain on Mr. Xi’s legacy. For years, China has pushed a triumphalist narrative about its top-down, heavy-handed approach to eradicating infections, saying that only the Communist Party, under Mr. Xi’s leadership, had the will and ability to save lives.

The changes the government announced on Wednesday — which would limit lockdowns and scrap mass mandatory quarantines and hospitalization for most cases — amounted to a reversal of “zero Covid” in the face of public opposition and mounting economic costs. But the party is deploying the full force of its propaganda and censorship apparatus to depict the transition as part of the plan all along.

More crucially, state media appeared to be distancing the policy shift from Mr. Xi, in stark contrast to the summer of 2020 when they had highlighted Mr. Xi’s declaration of victory against Covid when the restrictions curbed infections. Even the term “zero Covid” has suddenly disappeared from official statements and officials’ remarks.

Opening China up to a highly transmissible outbreak is not the success that Beijing had hoped to achieve, said Dali Yang, a professor at the University of Chicago. “They realized that this is not something that is worth celebrating,” he said. “Reopening has taken too long, and praising Xi may very well be counterproductive.”

Images and videos posted on Chinese social media and state media showed the rapid dismantling of the some of the most widely feared or despised features of the “zero Covid” controls around the country. Workers carted away signs denoting mass testing sites and ripped down posters that restricted subway use to those who had negative Covid tests. Prefabricated makeshift hospitals, which Beijing had once touted as proof of its ability to mobilize but had quickly become symbols of the state’s power to detain citizens, were torn down.

Internet censors seemed to be trying to tread a delicate line. Xiao Qiang, an expert on censorship at the University of California, Berkeley, said that since the new policy was announced on Wednesday, censors have tried to erase posts and comments that either called for sticking to the stringent “zero Covid” measures or supported the complete removal of restrictions.

“The government has indeed turned 180 degrees, but it does not allow the public to call it a complete failure of the previous policy,” Mr. Xiao said. “It also wants to basically control the narrative that what the government did was right, and the new policy shift is not directly the result of the protests.”

For the party, the strategy of playing down the threat of the virus is a gamble because it can be difficult to predict how China will fare as the virus continues to spread unabated. But health officials are worried about a surge in cases overwhelming the country’s hospitals, especially after mandating for nearly three years that anyone who tests positive must be admitted.

In a speech reported by the China Youth Daily, a Communist Party newspaper, on Wednesday, a former infectious diseases official predicted that as much as 90 percent of the population could eventually be infected with Covid. Feng Zijian, the former deputy head of the Chinese Center for Disease Control and Prevention, said officials must quickly accelerate vaccinations, especially in older people, and prepare the health care system for an influx of patients.

Spreading the message that most cases will not require any medical treatment could help hospitals with triage. On Thursday, China’s national health commission issued a plan that enabled Chinese to use store-bought rapid-antigen tests instead of relying on the widely criticized government-run P.C.R. tests. Residents who tested positive with self-administered tests could choose to quarantine at home, the plan said.

Many ordinary Chinese appeared to be bracing themselves for a widespread outbreak. On Weibo, a popular Chinese social media platform, people shared tips for quarantining at home. Residents began to stockpile drugs and pain killers, including ibuprofen and acetaminophen, apparently driving up prices in stores.

At the same time, many Chinese were quick to point out the party’s abrupt turnabout in policy. On Weibo, users mocked experts who had been enlisted to justify the central leadership decisions. Foremost among them was Liang Wannian, the chief scientist working with the World Health Organization on studies into the origins of the pandemic. (For months, Mr. Liang talked up the deadliness of the Omicron variant, but told reporters on Wednesday that the virus “has now become milder.”)

“The people persisted in popularizing science to the experts,” wrote one widely circulating post on social media. “The experts finally realized that Covid is less serious than the flu.”