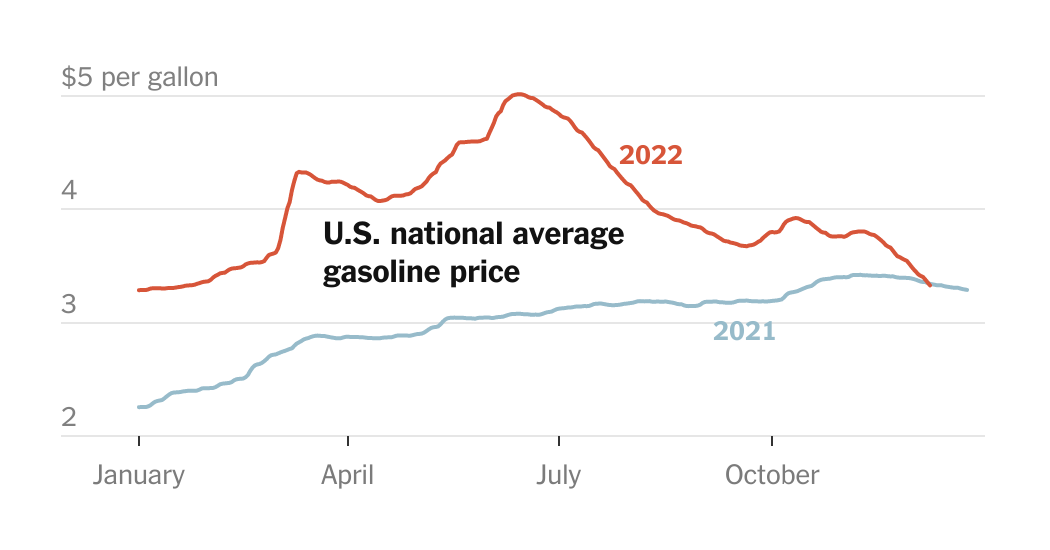 While the decline in gasoline prices has been widely felt, some states still have prices well above the national average. In California, which has high gasoline taxes and rigorous emissions standards that increase the cost of refining, the average price of regular gasoline was $4.62 a gallon on Thursday, down from $6.44 in June. In several Southern and Midwestern states, however, prices are below $3 a gallon, mainly because they have minimal gasoline taxes, if any, and demand is lower in rural areas, according to Devin Gladden, an AAA spokesman.

Global oil prices account for more than half the cost of gasoline. The prices of both West Texas Intermediate and Brent crude, the global benchmark, have fallen more than 20 percent since late August, as Covid-19 lockdowns in China reduced demand.

AAA expects gasoline prices to continue to decline through the end of the month, Mr. Gladden said, partly because winter-blend gasoline has fewer environmental restrictions, making it cheaper to produce.

But U.S. gasoline prices frequently decline in December before rising in January. And factors beyond the United States — including the Ukraine war and the decelerating world economy — make the outlook for the new year uncertain.

“We just have to continue watching oil prices because they remain volatile and as we saw in the spring, if oil prices spike to $100 per barrel, gas prices will follow suit,” he said. “A lot will depend on how the geopolitical tension continues to unfold throughout the winter.”

A further easing of China’s pandemic restrictions, for example, could prompt a rise in demand that would drive up oil prices. On Wednesday, the Chinese government loosened some of its rules after protests against its “zero Covid” policy.

“The stage is set for a spike in oil prices,” said Bryan Benoit, U.S. national managing partner of energy at the accounting firm Grant Thornton.