A TOWN is celebrating after residents each won £745,000 on Euromillions using a special tactic.

Locals in ‘the world’s luckiest town’ in Belgium won the £123 million jackpot after banding together.

The 165 strong syndicate paid in equally to buy EuroMillions tickets from the De Pershoek newsagent and the tactic paid off.

De Pershoek owner Wim Van Broekhoven explained that most of his customers could not believe it.

“I often had to repeat it five to six times,” he said.

Lottery spokesman Joke Vermoere said they all played together in the same newsagent in Olmen, where they each invested £13. 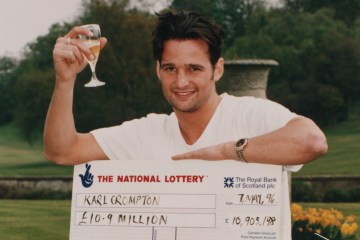 EuroMillions said there were more than 27 million entries purchased for the draw but only one matched the full winning line.

It comes after a lottery syndicate called in lawyers after one member was accused of keeping a £828,000 jackpot for himself.

But last month he went to claim the bumper winnings as an individual rather than for the group, a writ alleges.

Trent, who runs a clay pigeon shooting range near Perth, Australia, is now being sued along with lotto organiser Lotterywest.

Earlier this year, a man claimed syndicate leaders owed him a slice of a $63million jackpot .

They claimed he actually joined a losing syndicate – not the pool of 250 customers that struck lucky.

They took Mr Ing and the lotto organisers to court to block him from getting a share.

The bitter dispute was reportedly settled out of court before trial.