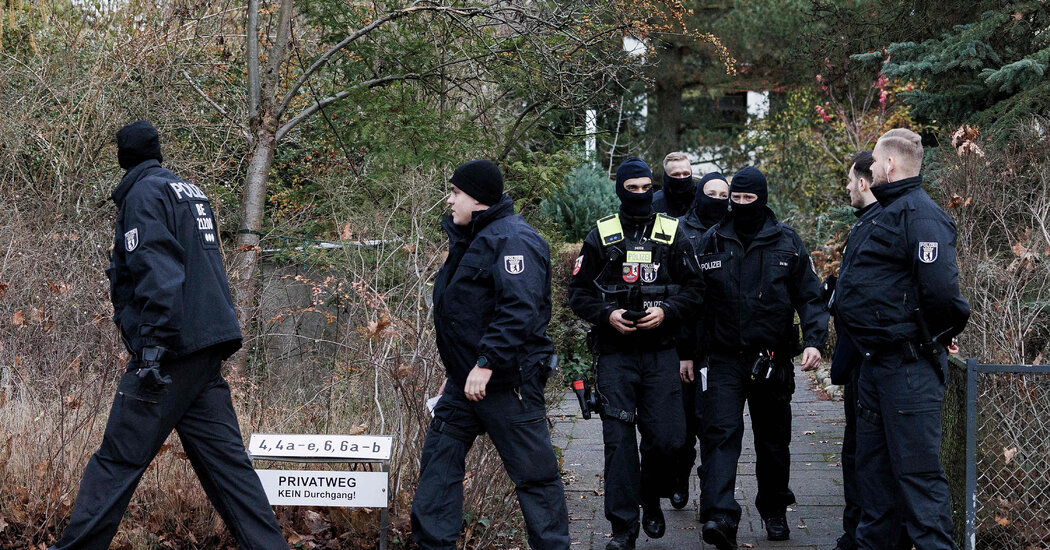 BERLIN — The day after 3,000 security agents fanned out across Germany to thwart plans to kill the chancellor and overthrow the government, the far-right group behind the plot has unexpectedly emerged as a very real terrorist threat since being supercharged by conspiracy theories during the coronavirus pandemic.

Long dismissed as wacky and harmless gadflies, the group, called the Reichsbürger, or Citizens of the Reich, which does not recognize the modern German state, has seen its ranks grow by 2,000 to some 21,000 members since the first Covid-19 lockdowns, government estimates show.

Among those arrested this week were a judge, a doctor, a classical tenor and a former police officer, officials said, as a disturbing picture emerged on Thursday of a group that had grown its appeal well beyond its roots on the political fringe.

At least 15 had strong links to the military, including several former or current soldiers and two reservists with access to weapons, putting the German authorities on high alert and after months of surveillance, setting off one of the biggest anti-terrorist crackdowns in German postwar history.

“The Citizens of the Reich movement has established itself as the biggest far-right extremist danger in Germany via the pandemic,” said Miro Dittrich, a senior researcher of CeMAS, a Berlin-based research organization focused on far-right extremism and conspiracy theories. “It’s dangerous not just that you have armed and trained members of the military and police in the group, but that the number of gun permits has gone up and several people in this group had such permits.”

Understand the Events on Jan. 6

It was the same group behind a failed attempt to storm the German Capitol during an anti-vaccine protest two years ago, and it is believed to have inspired a plot to kidnap the health minister and set off a coup earlier this year.

“This Reichsbürger scene has often been downplayed, even by security authorities. Well, not anymore,” said Hajo Funke, a political scientist at the Free University in Berlin, who focuses on the far right. The Reichsbürger movement, believes that Germany’s postwar republic is not a sovereign country but a corporation set up by the Allies after World War II.

The movement’s founding father is believed to be Wolfgang Ebel, a West Berlin railroad worker who was fired after taking part in a strike in the 1980s. When his attempt to get civil servant status failed in a series of court cases, he started calling himself Chancellor of the Reich and his home the Commissariat of the Imperial Government. He apparently sold I.D. cards and passports to the Reich to his followers.

For years, members of the movement mainly made headlines for refusing to pay taxes and handing in their passports, instead demanding a certificate identifying them as citizens of the German nation and often noting down their place of birth as the kingdom of Prussia or Bavaria.

But since the onset of the pandemic, they have become the main conduit for violent and antisemitic conspiracy theories, notably QAnon.

The mythology and language QAnon uses — including claims of a “deep state” of globalist elites running the government and revenge fantasies against those elites — conjure ancient antisemitic tropes and putsch visions that have long animated Germany’s far-right fringe.

Like QAnon, the Reichsbürger used the pandemic to draw an ideologically incoherent mixture of vaccine skeptics, fringe thinkers and ordinary citizens who said that the threat of the pandemic was overstated and that government restrictions were unwarranted.

Lorenz Blumenthaler, who studies Germany’s far right, calls the Reichsbürger a “gateway ideology,” because the movement attracts so many disparate groups disenchanted with the government.

Like other far-right groups, the Reichsbürger was able to exploit hostilities toward immigrants after an influx of refugees and migrants in 2015, and in 2020 amid frustrations with coronavirus lockdown regulations. The pandemic allowed the group to find new support bases beyond those who usually gravitate toward the right, and to tap into a deep vein of conspiracy theories that were becoming more potent.

“It has taken on a completely new level of radicalization,” Mr. Blumenthaler said.

The QAnon conspiracy theories dovetailed with their own and offered the prospect of an army led by Donald J. Trump, when he was president, restoring the German Reich. The cell arrested this week had planned to topple the German government, which it called the “deep state,” and then negotiate a peace treaty with the United States.

In the United States, QAnon has already evolved from a fringe internet subculture into a mass movement that in some cases has become a political force. But the pandemic supercharged conspiracy theories far beyond American shores.