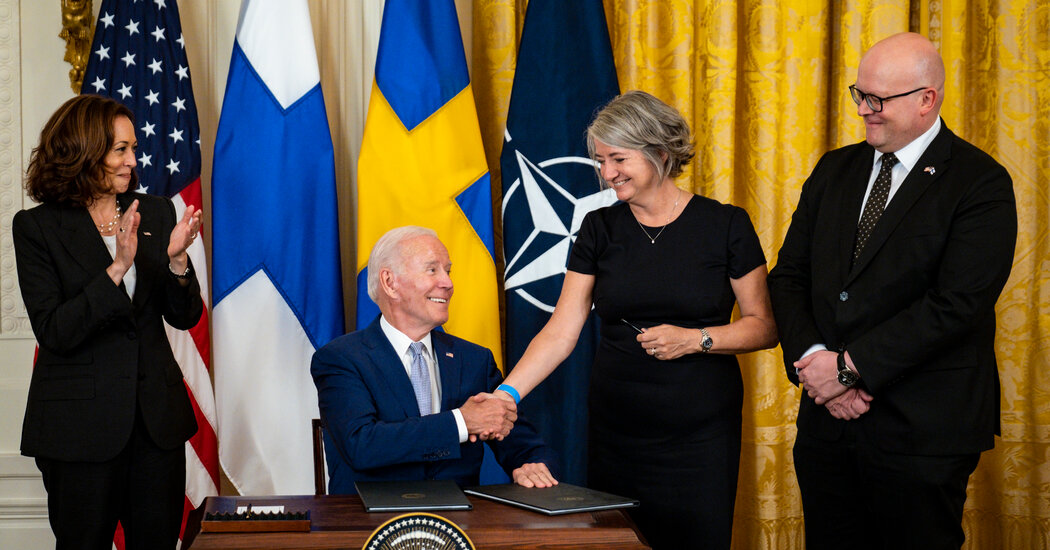 WASHINGTON — When President Biden hosted the leaders of Finland and Sweden at the White House this year, he spoke in triumphal terms about their decision to join NATO after decades of neutrality, in the latest blow to President Vladimir V. Putin’s efforts to undermine the alliance. It was, Mr. Biden said, “a momentous day.”

That was more than six months ago. As the year winds down, the two Nordic countries are still waiting for admission to the 30-member alliance. Twenty-eight members have approved their membership and another, Hungary, plans to vote early next year.

But one holdout remains: President Recep Tayyip Erdogan of Turkey, who has raised objections to the plan and, Western officials fear, may be willing to delay it for several more months. In a nightmare scenario, he might block the expansion entirely — all member countries must approve of additions to the bloc.

Either way, they say, the Turkish strongman is cynically complicating a major step in the showdown with Russia, looking to extract concessions from NATO and the United States before Turkish elections planned for next spring.

Meeting with his Swedish and Finnish counterparts in Washington on Thursday, Secretary of State Antony J. Blinken said he was confident that the two nations would be admitted, vastly expanding NATO’s border with Russia and giving Mr. Putin, as Mr. Biden has put it, “exactly what he did not want” in his confrontation with the West over the war in Ukraine.

At a news conference with the visiting officials, Mr. Blinken said that Finland and Sweden “fully understand what is at stake for Ukraine, for NATO, for the entire world at this critical moment” and were ready to join the alliance.

He added that both countries had taken concrete steps to fulfill their commitments, “including those related to the security concerns on the part of our ally Turkey.”

In an interview on Wednesday, Sweden’s foreign minister, Tobias Billstrom, said, “We are fulfilling our parts.”

“So I think that the direction is quite clear,” he said. “We are moving this forward together with the Finns, and we believe that we will be able to deliver on this.”

Analysts and officials said that behind the veneer of smooth diplomatic talk is a grubbier effort to placate Mr. Erdogan, who has seized on a moment of leverage created by the fact that NATO governs by unanimous consensus.

Most NATO leaders have celebrated the historic import of Finland and Sweden joining the military alliance. But the Turkish president has focused on issues closer to home as he tries to bolster his image as a strong international leader amid skyrocketing inflation and domestic unrest.

Mr. Erdogan has fixated on what he calls the Nordic countries’ support for the P.K.K., a Kurdish nationalist organization in Turkey that the Turkish government, along with the United States and the European Union, considers a terrorist group. Mr. Erdogan has accused Sweden in particular of being “a nesting ground for terrorists” and has demanded the extradition of dozens of Kurds he says have P.K.K. ties.

Since reaching a joint agreement at a NATO summit this summer, Turkey, Sweden and Finland have been negotiating in an effort to meet Mr. Erdogan’s demands. But Turkish officials have continued to complain. On Tuesday, the foreign minister warned that his government was still waiting for Finnish leaders to publicly promise to lift an arms embargo their country had imposed on Turkey after it invaded northern Syria in 2019, an operation aimed at fighting Kurdish allies of the P.K.K.

Several analysts and officials said that in the end, they expect that Mr. Erdogan will probably agree to the expansion but claim an act of political dominance over his Western allies, with whom he is in near-constant tension over the Kurds and his on-again, off-again relationship with Mr. Putin.

Mr. Erdogan might not get everything he wants but will look to win concessions “that can be showcased as the product of Erdogan’s masterful leadership and statesmanship,” said Mr. Coskun, who is now a senior fellow at the Carnegie Endowment for International Peace. Mr. Erdogan would look for “the right moment in the election cycle to deploy such a success story,” he said, before agreeing to the NATO expansion.

Mr. Erdogan has most likely been emboldened by a mid-November bomb attack in Istanbul that his government has attributed to the P.K.K., along with what it calls dangerous new Kurdish activity across the border in Syria, Mr. Coskun said. “They have added further legitimacy to Erdogan’s demands, especially in the public’s eye,” he said.

Soner Cagaptay, the director of the Turkish Research Program at the Washington Institute for Near East Policy, agreed that Mr. Erdogan would probably approve the NATO expansion next year but also predicted that he would make the most of his leverage.

He noted that Mr. Erdogan has been urging the United States to sell him upgraded F-16 fighter jets to modernize Turkey’s aging air force and that Mr. Biden was likely to pressure Congress to agree. Some key members, including Senator Bob Menendez, the Democratic chairman of the Foreign Relations Committee, are harshly critical of Mr. Erdogan and might oppose such a sale, compounding the White House’s political headache.

NATO’s failure to reach an agreement to admit Sweden and Finland — who applied for membership in tandem and say one will not join without the other — would be a major moral victory for Mr. Putin, who works hard to divide the Western alliance. Some have speculated that Mr. Erdogan might be willing to do the Russian leader such a favor, given that the invasion of Ukraine has brought the men closer in some ways: Russian money has helped keep Mr. Erdogan’s financial system afloat, and Turkish trade with Russia has boomed.

But Mr. Cagaptay said that a veto by Mr. Erdogan “would result in a rupture with NATO, and that’s too much even for Erdogan.”

“I think the game for him is to play Turkey and NATO against each other,” he added.

“Hopefully the objections that the Erdogan regime continues to bring up and the obstacles that they continue to put in the way can be dispatched soon,” he said.

Hungary’s authoritarian leader, Viktor Orban, who is relatively friendly with Mr. Putin, has also dragged his feet on approving NATO’s planned expansion. But Mr. Orban allayed concerns when he told reporters last month that Hungary’s parliament would approve membership for Sweden and Finland early next year.