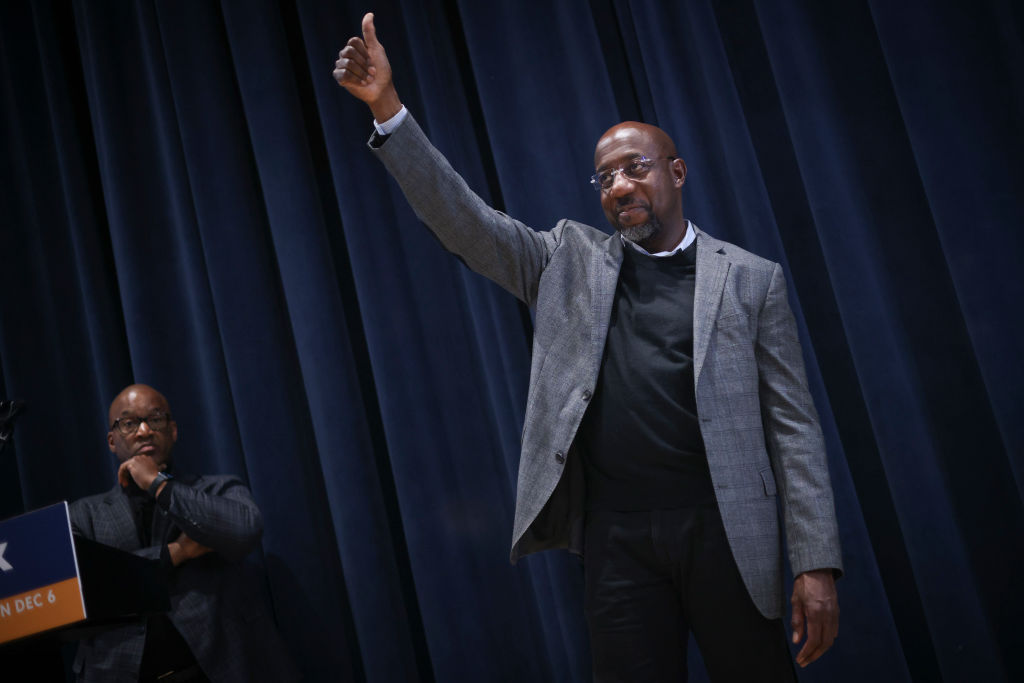 Georgia Democratic Senate candidate Sen. Raphael Warnock (D-GA) gives a thumbs up to supporters after speaking at a Students for Warnock rally at Georgia Tech on December 5, 2022, in Atlanta. | Source: Win McNamee / Getty

Sen. Raphael Warnock is projected to win the Georgia senate runoff with a narrow election victory over Herschel Walker in a contest that was close until the very end. The runoff election victory was Warnock’s second in as many years and paves the way for him to serve a full six-year term in the U.S. Senate.

It also solidifies the Democrats’ advantage in the Senate.

The Associated Press called the race late Tuesday night, less than a month after neither candidate could garner 50% of the general election’s votes, sparking the runoff.

At the time the race was called, most estimates showed Warnock clinging to a lead of a little more than one percentage point.

This year’s Senate runoff was subject to SB 202, an election law that makes it harder to cast a vote. Because of the timing of the runoff, a state holiday briefly threatened to prevent voting on the weekend after Thanksgiving. Countless voters wouldn’t have been able to vote if Secretary of State Brad Raffensperger and Georgia Attorney General Chris Carr had their way.

Speaking with NewsOne ahead of Election Day, voting rights and election protection expert Helen Butler said the challenges facing voters were to be expected given the combination of SB 202 limiting the time for runoff and the confusion caused by the secretary of state’s initial guidance on Saturday voting.

She explained that election administrators around the state had to essentially work double time winding up the Nov. 8 election and required risk-limiting audit to turn around and prepare for the Dec. 6 runoff.

“Going from nine weeks to for the runoff period down to four weeks made it difficult,” said Butler, who leads the Georgia Coalition for a People’s Agenda. “It truncated the timeframe and basically made vote by mail nonexistent. It made it such that the election officials were scrambling to ensure they got all the equipment set up and reprogrammed for the new election.”

Democrats had already secured control of the Senate before Warnock’s election Tuesday night, but there was still plenty at stake. Warnock’s win gives the Democrats a 51-49 edge.

At times, the Senate race between Walker and Warnock devolved into scandalous proportions, thanks in no small part to multiple women accusing the avowed pro-lifer of encouraging and paying for their abortions.

Walker was also caught in several notable lies, prompting his own campaign to label him a liar.

But it was Walker’s insistence that he worked in law enforcement that seemingly generated the race’s most infamous moment: when the Republican pulled out a fake badge during the one and only one-on-one debate against Warnock.

It came as Warnock challenged Walker on the topic of policing.

“I’ve never pretended to be a police officer and I’ve never threatened a shootout with the police,” Warnock said in reference to reports that Walker did just that.

It was at that moment that Walker pulled out an apparent police badge as purported proof of having a background in law enforcement years ago. He was quickly admonished by debate moderator Tina Tyus-Shaw, who reminded him that the debate rules forbid the use of any “prop.”

The exchange led to the proliferation of social media memes centered on fake police badges that mocked Walker and prompted and outpouring of ridicule and laughter.

On Tuesday night, though, Warnock got the last laugh with his runoff victory.

This is a developing story that will be updated as additional information becomes available.

How The Georgia Senate Runoff Works As Republicans Cause Confusion